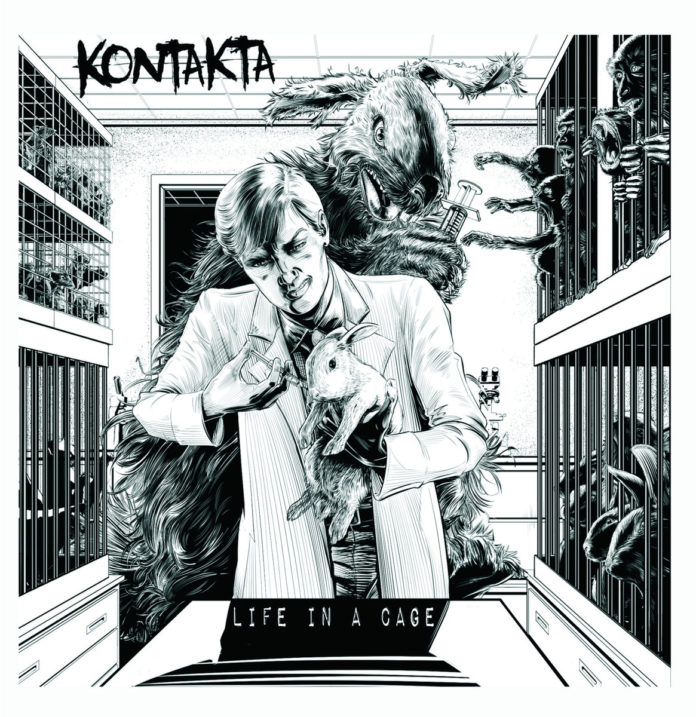 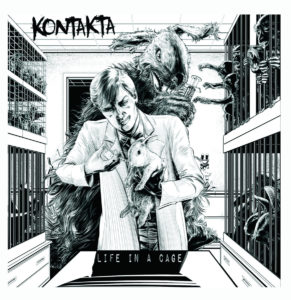 Southampton unit Kontakta offer up their take on animal abuse and surveillance society on a slab of punk vinyl that is rooted in D-beat and anarcho punk. Nathan Brown turns the volume up to 10 and likes what he hears.

What Kontakta do is gruff and grunty shouty punk rock clearly inspired by Swedish and Finnish bands who were in turn inspired by a band from Stoke-On-Trent. Yes, we are in D-beat land. The name should have been a give away – it is Swedish for “contact”. Although Kontakta stop short of deploying the classic “D-beat” drum rhythm, it’s too obvious an influence to ignore. They get up some speed, faster than some of the early adopters but not quite at the tempo of Japanese bands like Framtid. However, there is also something of the anarcho-punk aesthetic at play and just a hint of what these days seems to be called “UK82”. Chuck in some singalong choruses and a fair dollop of distortion and you’d be there.

Some might call this crust – in fact some cheeky wag called them “local average crust” on a gig flyer! I wouldn’t use that term myself as it doesn’t veer into the land of metal that time forgot. But then it depends on who you are as to where the “crust” line in the sand is.  What is for sure is that this is resolutely punk with 14-up boots.

The band is clearly guitar riff led, with the drums and bass providing drive, rumble and emphasis. Some of those riffs have a hint of Anti-Cimex, early Varukers or Born/Dead to them. The guitar is full on sounding but it’s not distortion til deafness.  It’s neither top end buzzing chainsaw nor a bottom heavy crunchy metal sound.  Like the roar of a WW1 tank with a razor edge that slices through the songs. While I am finding it hard to put my finger on it, I guess there is a touch of the Iommi influence in there.

The singing isn’t crystal clear but it’s not aaaarrgghh blleerrugh either so you can make out what the band are singing about (although there is a lyric insert just in case). Take early Doom then add a sprinkle of Icons of Filth and you might be there.

Burn My Eyes kicks off with a deceptive chuggy start before it kicks in properly.  Like one of those kids toys that you pull back slowly and as you let it go it whizzes across the room. The drums start a-pounding and the relentess guitar drives the song forward. Written from the point of view of the test victim, it’s a song about vivisection. Big downstrokes punctuate the chorus “Burn My Eyes”. A cheeky 10 second solo in the style of Totalitar or Doom punctuates the middle of the song and then we’re off again. What warms my cockles is that this is only one of 3 songs about animal rights on the EP.  Animal abuse is still taking place.  It still matters.

They Will Decide starts with a rumbly distorted bass taking its cue from Doom before the drums and guitar crash in again.  The jauntiness of this song for some reason reminds me of a sea shanty!  Singing about the constant surveillance we all gladly sign up to now, Kontakta remind us, “Your mobile phone is satellite tracked. Your entire life is digitally mapped.” You see, it’s not just the animals in the test lab who spend life in a cage.

Jumping out of side 2, Blood Junkies is a right speedy little song with punchy choruses. The words are somehow crammed into the available space as if with a crowbar. You think they’re going to run out of song but they manage it okay.  Verses about hunting deserve only one singalong chorus: “Murdering Bastards”. Say what you see. And subtlety is over-rated anyway.

Meet Your Meat starts off with another mid paced intro on the bass drums as feedback chimes in then it kicks off at speed. Kontakta want you to recognise the life, recognise the face, meet the meat you put on your plate. The chorus and the outro is punctuated with cheeky dischordant guitar noises that would sit well in an Inepsy song. I’m sure the lads were particularly pleased with the sample they dropped in at the end but I’ll let you hear that for yourselves. It sure gave me a wry smile.

Recorded at Southsea Sound, who have a habit of bringing out the best in South Coast bands, this is a DIY release by the band’s own Militant Tendencies label. While the band had some labels lined up to release their music, they didn’t want to wait for the backlog to clear so did it themselves. And they have put together a really nice package. The songs work really well on the 7 inch format at just over 4 minutes on each side.

The cover art is high quality artwork by comic book artist Soussherpa AKA Robert T. Baumer. The concept came from the band themselves, and it shows the callous vivisector injected a rabbit while a giant sized horror rabbit lines up to inject the injector. It’s the sort of thing you’d expect to find in Black Mask comics like Liberator. Great on so many levels and demand for t-shirts must be imminent.

You can get this 7 inch slab from the band in person at gigs, via Facebook or through bandcamp. Non bandcamp purchases include a download code, with access to an extra track, Promised Land, a song about Palestine.  I love it when bands give a download code with the physical artefact.

You may also like to check out the Kontakta’s contribution to the election debate: Tory Scum.