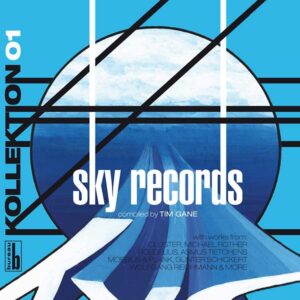 A genre-defying  ‘kollektion’ from the legendary Sky Records archives pushes the boundaries of the limitless lode which is Krautrock.

Although I was aware that some boundary pushing artists such as John Lydon and Mark E. Smith were known to say nice things about Krautrock, or Kosmiche if you prefer, for years I somehow laboured under the misconception that it was some kind of German version of Prog, albeit with less pomposity.   Fortunately in the middle part of the 1990s, it became increasingly apparent that I might be missing out on a good thing,

Julian Cope published a book on the subject called Krautrocksampler and any time I would read a review of Stereolab, one of my favourite bands of the time, I would see the K word used as a reference point. It was definitely time to investigate.

Two decades later I’m still no expert and it was the Stereolab connection again that alerted me to this new compilation, which their former member Tim Gane has just put together after delving into the archives of one of West Germany’s most innovative labels of the era.

Kollektion 01, the first in a series of releases on a theme from Bureau B, gets under way with Gane’s choice of seventeen tracks originally issued on Sky, an independent based in Hamburg that was founded in 1975 and run by Günter Körber, who’d previously been heavily involved in Brain Records, another legendary German imprint.   Crucially for the success of his new venture, Körber managed to sign several former Brain recording artists to Sky, most significantly Cluster (Dieter Moebius and Hans-Joachim Roedelius), who at this point were just starting out on a number of artistically fascinating collaborations with Brian Eno, which would include the 1978 album After the Heat, credited to Eno Moebius Roedelius.

Taken from it is The Belldog and fans of Eno’s Before and After Science LP will surely enjoy its electronic yet pastoral feel and might want to compare it with By This River from the Eno album – which Cluster also co-wrote and played on.

In addition to Cluster, several other key Kosmiche pioneers are represented here including Michael Rother once of Neu! and Harmonia, who Bowie had originally planned to invite to play guitar on Heroes – feel free to join the dots.   Feuerland from Flammende Herzen, Rother’s first solo album is another album highlight; it’s wonderfully atmospheric and showcases perfectly the flexibility and dazzling innovation of Rother’s layered guitar playing and it has a great groove too, underpinned by Jaki Liebezeit from Can helping out on drums.   The track was co-produced by Rother along with studio visionary Conny Plank, another key figure in German music of the era and someone who repeatedly brought the best out of the many bands signed to Sky that he recorded at his famous Conny’s Studio in Cologne.

Plank makes an appearance here too as a musician with the joyous, defiantly odd and genre-defying Conditionierer, the opener from Moebius & Plank’s 1981 LP, Material.   Gane has also thrown in some names that I knew little or nothing about until now: Gerd Beerbohm, Günter Schickert, and Riechmann, whose Himmelblau is another absolute standout, four and a half hypnotic minutes of radiant synthesiser bliss somewhere between what Kraftwerk and La Düsseldorf were doing around the same time. Himmelblau made me instantly want to seek out the album Wunderbar that it’s taken from – and sadly as I was doing so, I discovered that shortly after of its release in 1978, Wolfgang Riechmann had been murdered, therefore leaving only a relatively thin back catalogue.

Also worth singling out for praise is Roedelius’s Glaubersalz with its pristine melodies and Glucose by Moebius & Beerbohm, who also provide a track here, Doppelschnitt, which you might easily assume had been recorded in Detroit five years later than it actually was; likewise Prothese, from the 1979 Cluster LP Grosses Wasser, could be described as proto techno – if a DJ had dropped either of these two recordings into a set in The Haçienda during the late 80s, I doubt that anyone on the dancefloor would have objected.   It’s remarkable how fresh most of this music still sounds today and how Krautrock has grown to become one of the prime musical influences of the 21st century for indie and rock bands.

This compilation won’t necessarily be for everyone but maybe if you’ve been impressed by, say, Soul Jazz’s two Deutsche Elektronische Musik releases and want to widen your knowledge of the genre, then I’d definitely recommend this for you. Maybe even if you’re just a fan of some of the bands who’ve clearly been dabbling in Krautrock repetitive rhythms – think of The Horrors’ Sea Within a Sea, 2013 by Primal Scream or Jump Into The Fire by LCD Soundsystem – then you’ll likely enjoy hearing some of the adventurous and forward thinking music that those songs are so clearly inspired by.

I wish this had been out twenty years ago and I’ll be looking out for the next in the series, Kollektion 02: Roedelius, compiled by a recent collaborator of his, Lloyd Cole – and yeah, I was a bit surprised too when I first heard of that particular pairing.

To buy Kollektion 01 click here or here for a taster of some of the music.

All words by Jamie Havlin, find his Louder Than War archive here.