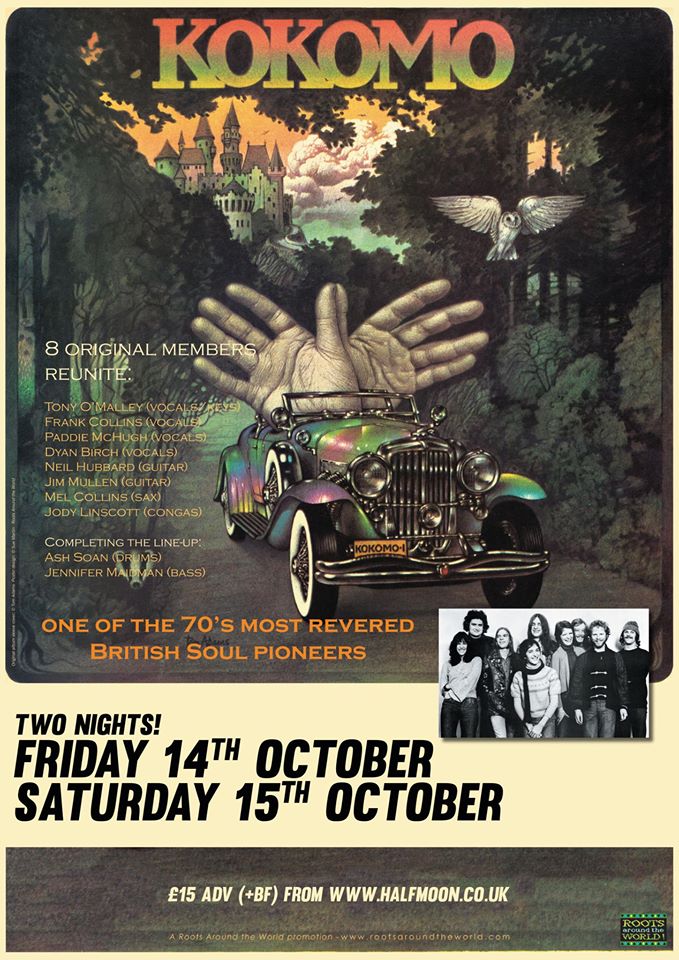 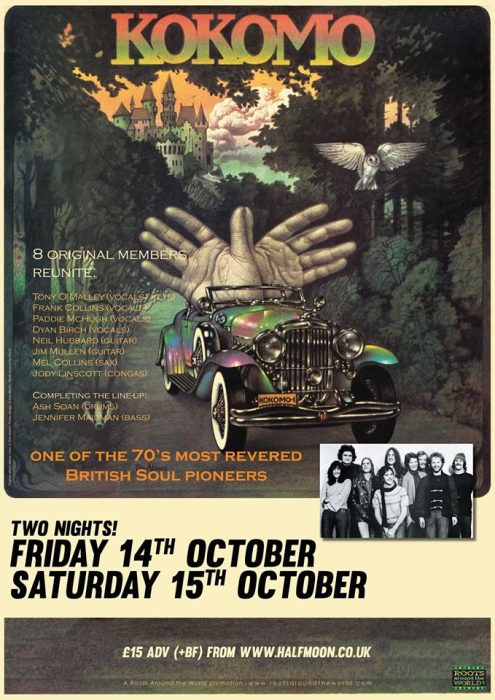 The British Funk Soul pioneers were back at the legendary south London venue for two sold out shows. Louder Than War’s Craig Chaligne reviews.

Louder Than War was able to catch them last year at The Royal Festival Hall where they played an excellent opening set before their comrades from The Average White Band headlined but the full two hour extravaganza with an audience full of long time fans was really something else.What a band, what a show !!! Kokomo spent the seventies as a band poised to achieve mainstream success but contrary to the AWB, never managed to get all the stars aligned. This coupled with the difficulties of keeping a 9 piece band together meant that they had to take on other work to survive. For more info on each of the bands members history as session musicians, please check their official website, it really is quite impressive. Nevertheless the band have always remained great friends and sporadic reunions occurred over the years. A more permanent reunion took place in 2014 and the band are now back together and gigging regularly.

Starting with an instrumental titled “Tee Time”, the band was then joined by the three Kokomo singers: Frank Collins, Paddy McHugh and new recruit Helena-May Harrison (Dyan Birch is not well enough to perform nowadays but Frank never fails to mention her at each gig). Starting with the unreleased “Turn Up The Microphone” that saw each member taking a solo spot, the band then played  their very own arrangement of Allen Toussaint’s “Yes We Can Can”.  An excellent take on Quincy Jones’s “Stuff Like That” was followed by the great O’Malley original “Meteorite”. Helena-May did a superb job on “Forever” which also featured a great flute solo by Mel Collins. Kokomo have always been great admirers of Aretha Franklin and Frank Collins and Paddy McHugh shone respectively on “With Everything I Feel In Me” (epic twenty minute version that saw each musician taking a solo) and “Angel”. Collins was in great form throughout the night and clearly having a blast at one point teasing Mel Collins that he didn’t get this kind of reception when he played with King Crimson. The band was on fire with the rhythm section of Jennifer Maidman (bass), Jody Linscott (percussion) and Andy Treacey (drums) holding down the grooves like there was no tomorrow while Jim Mullen’s guitar runs were spotless

Tony O’Malley took the lead again on his very own “Naked Flame” during which we were treated to a superlative solo from Neil Hubbard. Another O’Malley original  (“Back At The Bag) gave a red hot Half Moon audience the opportunity to participate. Closing off with their version of Bobby Womack’s “I Can’t Understand It”, the band then returned to play “Sweet Home Kokomo” and “Third Time Around”. Kokomo are back at the Half Moon on the 14th of March 2017, make sure you buy your ticket now !!!