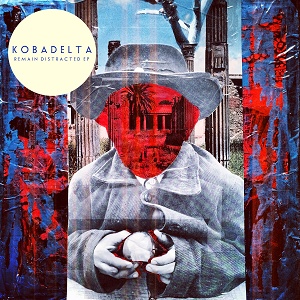 It’s no real winder that Kobadelta have already rubbed metaphorical shoulder with the likes of Shaun Ryder and Peter Hook this year. They’re destined for big things.

The Stockton Weekender will have no doubt served as a great platform for the group to perform their music to a large audience and it’s one that will only get bigger. Their brand of Indie, psychedelia, blues and heavy rock is, or at least sounds unique.

The rambling vocals of Dom Noble fit perfectly with the meandering guitars and throbbing bass over often manic drums as they exude some rather complicated if not sometimes risqué lyrics. Opener, Siam won’t get much radio airplay for instance (unless there are some deaf programmers around – let’s hope so), but in some way that’s no big deal as there are another three crackers to pick from. The lead track does contains an infectious hook and strap-line and will ensure that at least your feet are tapping. It does in less than three minutes what many tracks fail to do in twice the time.

Repetition provides that curious blend of punk and metal. Two opposing forces which Kobadelta somehow manage to marry together in harmony. A wonderful middle section where guitars are allowed to freely weep over a mystically appropriate interlude.

The group are often compared to The Doors. It’s something that they don’t intend, but it’ quite a compliment. They Can’t Hurt Me has more than a nod in the direction of Morrison’s men as its psychedelic feel accompanied by subtle keyboards develop into marvellous rolling drums on occasion.

Closing with The Heretic, a blues-psych affair with a fantastic distorted bass swaggers from start to finish with its arse showing proudly out of its worn-out, ripped jeans like a band that was born to make music as if their lives depended on it.

Kobadelta are a breath of fresh air of that there is no doubt. Equally, they’ve probably only just started on their quest for widespread approval. Keep your ears open, they’ll be inside them soon.