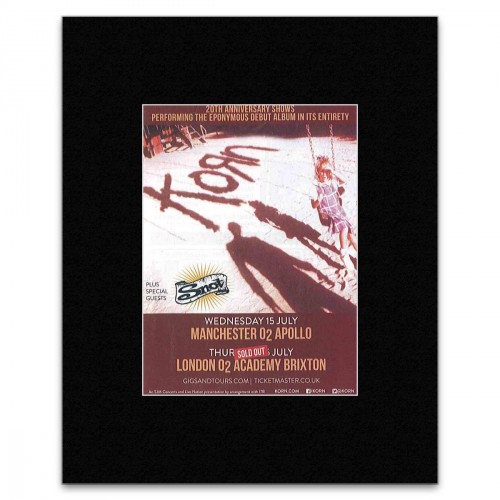 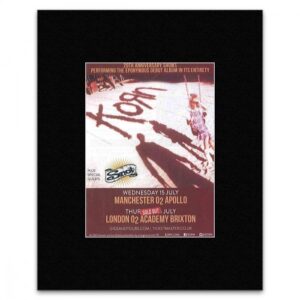 Nu-Metal legends Korn rocked in to Manchester to treat fans to their debut in its entirety. Was their set as strong as the pull of nostalgia? Andy Santiago reports.

Nu-Metal band KoЯn have been over in the UK for a handful of live dates. Andy Santiago caught up with them in Manchester.

So, it was 20 years ago that a band called KoЯn from Bakersfield, California released their self-titled debut album.

This album is rightly recognised as the foundation and blueprint for a movement that was to become the global phenomenon known as “Nu-Metal”.

The angst-ridden lyrics, downtuned guitars, bass guitars as percussive instruments and beats heavily influenced by Hip Hop were the trademarks associated with this new sound.

And the kids loved it.

Not only did it provide a fresh take on metal in general, it was the logical next step on from the smack-soaked Grunge scene that was rapidly going the same way as the dinosaur.
Soon every town centre was swarming with kids clad in oversize baggy pants, wallet chains and Adidas clothing. Nu-Metal was upon us and rightly or wrongly, it was absolutely vital.

KoЯn were at the forefront of this new movement and have enjoyed a career that is still going strong and still as relevant as it was 20 years ago. Though some may argue their flirtations with Dubstep were ill-advised, the fact remains KoЯn are still doing good business.

Having seen them numerous times over the years and most recently only 6 months ago when they absolutely blew headliners Slipknot off the stage in Newcastle, I gratefully accepted a place on the list for the debut album 20th anniversary show at Manchester earlier this week. One of only 2 UK shows, the other, unsurprisingly in London.

Arriving at the Manchester Apollo it was clear to see that the fact the previously mentioned tour with Slipknot had only passed through Manchester 6 months earlier and that it was a ‘school night’ had no bearing on the attendance. The Apollo was rammed and buzzing with a sense of occasion and anticipation.

As the house lights go out the crowd roar almost drowned out the familiar tapping cymbal intro to the anthemic ‘Blind’.
The curtain drops, the band detonate that most beautiful of riffs and frontman Jonathan Davies along with about 3,500 others on backing vocals scream the opening line, the mission statement,

KoЯn really are taking it back 20 years and the stripped down production onstage comprising of nothing more than a backdrop of the album artwork and a line of candles shows this. Even Davies is wearing his former trademark Adidas clothing and there is no sign of his Giger-designed mic stand.

It was always going to be a relatively straightforward trot through the album and to be quite honest, in some places it wasn’t quite as magnificent as nostalgia would dictate. Where we were stood the sound was far from loud enough and the trademark guitar and bass sound was severely lacking.
Having said that, the absolute savagery of “Clown” and “Faget” more than satisfied. Especially the latter, once again the Manchester crowd joining in on backing vocals for ‘that’ line.
“Shoots And Ladders” with the magnificence of a bagpipe intro and sinister nursery ryhyme lyrical stylings was also a highlight.
The extremely uncomfortable and deeply personal subject matter of “Daddy” was turned around into defiance and was indeed a powerful moment in the set.

After what seemed like a very short space of time, the main part of the set was over and the band left the stage. The Giger mic stand was brought on and I salivated at the prospect of been beaten around the head with a greatest hits encore. “Falling Away From Me”, “Here To Stay” and the inevitable “Freak On A Leash” were delivered and that was it. Nothing more. The band left the stage again and the Manchester crowds cheering for more rapidly descended into a chorus of booing as the house lights came up and the reality of the gig been well and truly over dawned.

A 3 song encore and the first album that combined was just about a 75 minute set. For a ticket price of nearly £50. I’ll leave you to make your own minds up about that one.

To be fair, it was most definitely one of the best KoЯn gigs I’ve ever attended but in this particular case, the old sayings of “Leave your audience wanting more” and “Less is More” certainly were not applicable in this instance.