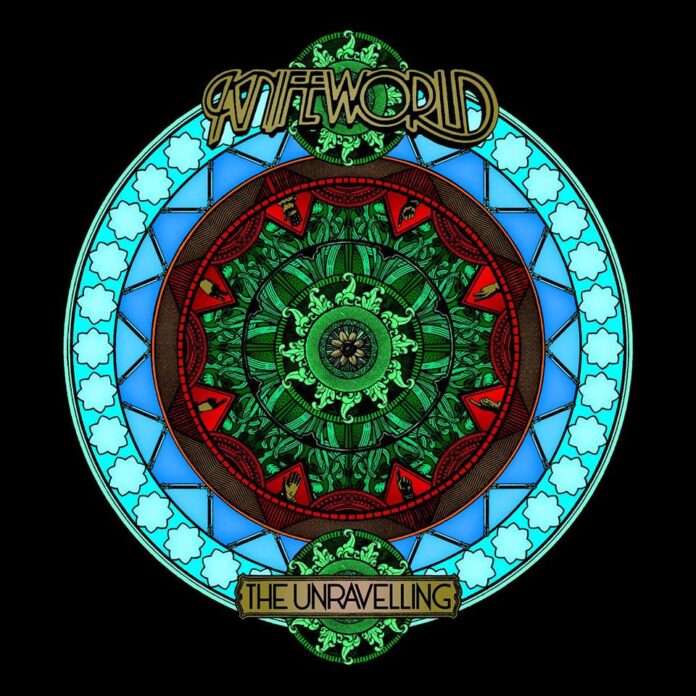 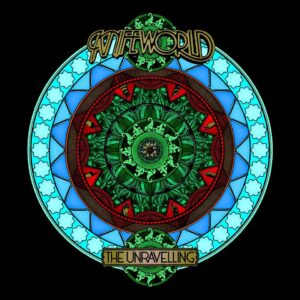 Knifeworld released their critically well received second album last year. We failed to post a review at the time so here Roxy Gillespie makes up for that by posting this belated review.

When I agreed to review the Knifeworld album ‘The Unravelling’, it was for a number of reasons. As a freelance reviewer, it can be very easy to simply review the sort of music you listen to on a daily basis. Easy but stultifying. More of the same can only take you so far. A comfort zone is lovely, but things can get a little dull if you never break out of its confines. So here I am reviewing a new album by a new band (new to me, anyway). I think it is safe to say it is not my usual listening material, but, not being the sort of person to dismiss things without reason, I wanted to try to do it justice.

The second Knifeworld album has its roots in near despair. Kavus Torabi (Cardiacs, Gong), had suffered tremendous loss and seen many of his friends going through the similar hardships. His whole life seemed to be falling apart, hence the title. I’ve been through periods in my life like this. Things are fairly difficult now, to be truthful, so I hoped to find some resonance and fellow feeling in the music.

‘I Can Teach You How to Lose a Fight’ is an interesting start to the album, full of musical twists and turns. The pure verve and accomplishment of the 8 musicians handle the changes in tempo and style with ease. There are hints of Gong here, and the song is none the worse for it. The sound is soft, smooth and pleasing to the ear. The vocals, performed by Kavus Torabi and Melanie Woods, have a folk- style intonation that suits the music perfectly. There are prog-rock influences at play, but they are subdued enough to form a harmonious edge, rather than anything too bombastic.

The second track, ‘The Orphanage’ was much shorter with a heavier, punchier edge. Of all the tracks on the album this was the one that made me think of the energy and wonderfully chaotic music Gong used to produce. The rough edge to the vocals fitted the jazzier feel to the track, which, although short, was one of my favourites.

‘Send Him Seaworthy’ is a heart breaking track. The carnival hurdy gurdy of the introduction leads into pared-down vocals that have echoes of some of the finer 60’s pop bands. But it is the lyrics that are the focus of this show. Obviously written from the heart, they deal with Kavus Torabi’s feelings about the physical collapse and need for 24 hour care experienced by Tim Smith, former lead singer of The Cardiacs. The song is personal in the extreme, dealing with the terrible feelings of watching someone you love have such a catastrophic thing happen to them. It was here I found kinship and understanding. The music has a prog-rock feel, but it’s often soft and thoughtful, as it needs to be to support such harrowing lyrics.

The urgent drums and keyboards give a fine, spaced-out feel to the beginning of ‘Don’t Land On Me’, but the track becomes less inspiring as the tempo drops. The female vocals provide a welcome respite, but I found the gradual introduction of the male vocals grating. The rockier feel towards the end of the track almost redeemed the song, but all in all, I found it pleasant rather than ground-breaking.

With a title like ‘The Skulls We Buried Have Regrown Their Eyes’, it was to be expected that there would be a sinister edge to this track. Backed by minimal music and almost undefinable sounds, Knifeworld have produced a track which manages to be interesting, disturbing and melancholy at the same time. The lyrics again stem from the same deep well of pain, looking back at a painful past, yet yearning for it at the same time. I thought this was a truly unique song and one of the best on the album.

The rock-styling of the vocal delivery at the beginning of ‘Destroy The World We Love’ contains more interest than the slightly meandering music, giving the track a welcome lift. I was disappointed that the music reverted back to a more prog-rock feel part way through the piece. For me, this was a missed opportunity to build a song that had more punch throughout.

‘This Empty Room Was Once Alive’ reminded me vocally of Focus on the album ‘Moving Waves’. The lyrics had a haunting authenticity stemming from the pain of their creator I couldn’t help but feel moved by. It is during these songs the album shines. I feel almost voyeuristic saying this, as if I am benefiting from someone else’s suffering and desperation, but I think many of us can identify with the struggle of seeing those we love fighting long periods of disablement and pain, the feeling of having the sand shift under your feet and having little to hold onto to keep you upright.

I’m Hiding Behind My Eyes’, the last track on ‘The Unravelling’ revolves around a hypnotically repetitive guitar refrain backing the graceful vocals. The whole mood is soft and agreeable, although there is a plaintive tinge to the lyrics. It’s a beautiful track and a fitting end to the album.

Would I have written the same article about ‘The Unravelling’ a month ago before my mother had a stroke that has left her unable to speak and barely able to swallow? It’s unlikely; my experience has meant I can identify with the lyrics on a personal level. Will listening to it change my rock/punk/grunge based listening habits? Again, unlikely. Was moving out of my comfort zone good for me? Undoubtedly. An awful lot of music has merit, and Knifeworld manage to produce some stunning sounds.

I felt at times, though, that the music became too meandering for my tastes. I got to hear a lot of prog-rock when I was young. It didn’t float my boat then and it doesn’t now, but ‘The Unravelling’ has a number of influences at play, and at times the music has a unique quality. The musicians playing on the album are obviously incredibly talented and accomplished, but I felt that the constant changes in tempo and style sometimes gave me less time to appreciate their specific input than I would have liked. I’d just be thinking ‘Oh, this is really good…’ when everything would change musically, leaving me with a tinge of disappointment.

Lyrically, Kavus Torabi might have worried about laying his heart on the line, but how else are artists supposed to deal with the awful things that happen, but through their art? The sincerity and truth of the lyrics shine through. Without putting our own feelings into our work we end up with content that is trite and banal. There were flashes of brilliance during the album, times also where the discomfort felt whilst listening to some of it was actually a good thing. I hope expressing his pain through this album has helped him deal with the nightmare a little better. All in all ‘The Unravelling’ is as beautiful a way to express that pain and channel it into something fabulously creative, which forms a fitting tribute both to Kavus Torabi’s feelings and to Tim Smith himself.