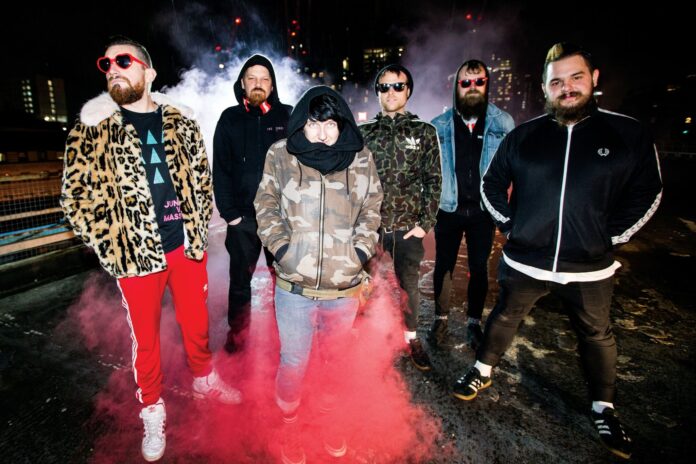 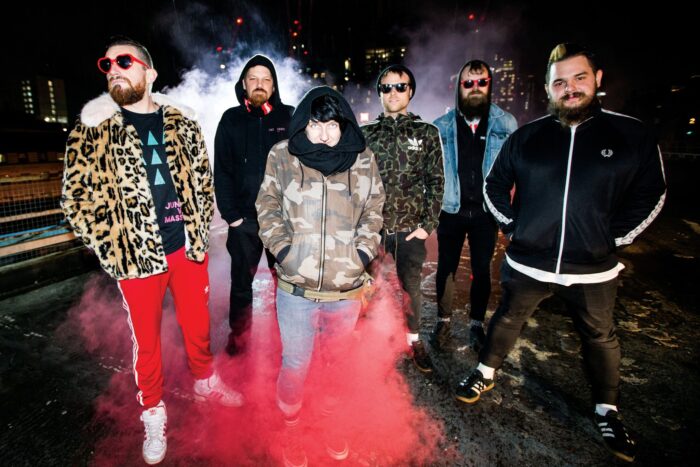 Knife Club, formed by various members of groups on the TNS roster are about to release their new EP. We caught up with TNS honcho and ex-Revenge of The Psychotronic Man singer, Andy Davies to hear all about it…and we have the exclusive full stream of the EP right here!

After spending months building up hype with the #whoareknifeclub? hashtag and a load of social media teasing, the Knife Club/TNSrecords supergroup project seamlessly managed to line up their launch and subsequent gigs and festival dates with the launch of a global pandemic and national lockdown and as a result, fell flat on its face. In response to this, the band formerly known as ‘the most mysterious band in DIY punk’ decided that the next thing they would attempt to do would be to see how much music they could release without ever playing a gig.

Andy explains how the project came about. “Everyone is from TNS bands. Eliott (guitar) is in Nosebleed, Dan (guitar) plays in Haest and Matilda’s Scoundrels, Zoe (vocals) is in Casual Nausea and has recently started Mousebrass, Dani (bass) is from Faintest Idea and Big Hands (drums) was also in Revenge. Eliott and Dan started the band. They got matching Knife tattoos with each other’s names on and thought that meant they should start a band. Then at Wotsit Called Festival, 2018 they asked us all to join. It has always been a logistical nightmare, with members in Manchester, Leeds, Ipswich, Kings Lynn and Hastings, so we’ve always written long distance, even for the album (there was only one practise with everyone there even for the album). I think it was only ever meant to be a one gig/one recording type project, but we liked it, so ended up booking a load of dates which all got cancelled so we’ve not done a gig yet.”

Ripchord records asked Knife Club to contribute a track to an acoustic punk compilation. All proceeds of the compilation went to the mental health charity, Support In Mind. The band managed to knock together a new version of album favourite, The Tibby Tan Tiger, substituting drums for a cajon and inviting Tessa Hunt (of Stand Out Riot fame) to add some violin. The recordings were made individually at home, during lockdown, with a mix of USB mics and borrowed equipment. Ben Hannah mixed it all together at Organworks in Leeds.

After being really happy with the recording, really bored during lockdown and saving enough money by not being allowed in pubs to buy some slightly better recording equipment, they decided to do some more tracks. This 7” includes a reworked version of Remember The Gold Dollar Sign Hoodie?, also from April’s debut album, We Are Knife Club, the new version of The Tibby Tan Tiger and three brand new tracks, written during lockdown, two of which explore lockdown lyrically.

Andy continues, “In such unprecedented times, the band felt it would be nice to document what was going on in some way, but also to try something new and out of our comfort zones. It is safe to say that this EP does not sound anything like any of the members other projects.”

It is available to pre-order now on 7” vinyl and with T-shirt bundles here, and as a download from Bandcamp.