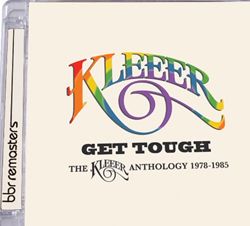 Kleeer, though a funk band at heart all through their existence, were markedly different than say the likes of George Clinton’s cosmic Funkadelic. Playing a far slicker, less other-worldy version of the style, nonetheless their bass-driven, classy street grooves bear comparison to their more successful contemporaries like Chic.

After starting off playing a harder rock sound under the name Pipeline and also a spell as studio aggregation the Universal Robot Band (this being a successful collaboration with disco producers Patrick Adams and Greg Carmichael), they became Kleeer in 1978. Norman Durham seems to be the driving force of the band and his songs dominate. He had an obvious talent for memorable hook-lines and augmented by singer Woody Cunningham with Paul Crutchfield and Richard Lee on keyboards and guitar respectively, these four would be the constants in a shifting line-up of contributors and guests (including fresh off Bowie’s “Young Americans” tour, smooth soul legend-in-the-making Luther Vandross).

The formula of this new band was simple but effective – apart from the odd ballad, being tough funk jams with sweet (hired in mainly) female vocals contrasting with those of the gruffer Cunningham, the bass guitar being the lead instrument and often supplementing the usual guitar/bass/drums with added strings and modern effects like vocoders and synth washes. In this time-frame it was inevitable that there would be a crossover with disco – after all you couldn’t have disco without funk in the first place and Kleeer’s lengthy but danceable workouts fit like a glove for the clubs despite them never abandoning the music that got them there.

Oddly though the band members opted at first for keeping a low profile and avoiding photographs, making the logo their main corporate image. Such Post-Punk thinking was apt, because though Kleeer specialised in a pretty smooth sound, when funk became the style of choice for the bright young things of 81, their bass-driven jams were spot-on for bands like Pigbag to replicate. Rick James, the king of punk-funk was a fan of them alongside film star Eddie Murphy, but though much admired, somehow they never quite made it.

Though remaining nearly men, there were a number of occasions they could and probably should have broken through with a big chart hit. The catchy “Get Tough” went very close in the UK and the singles were mainstays in the US R’n’B charts, but they never got lucky in the way Cameo for instance, a similar band, did with “Word Up”. Inevitably as the 80s wore on they got a little more commercial with slower, more reflective tunes dominating. Their “Intimate Connection” single is a lovely bit of soul pop that really should have charted, but right to the end they still kept their funk base on numbers like “Tonight”.

Though never quite achieving that breakthrough Kleeer are fondly remembered and their slick rhythms have been sampled by many a Hip Hopper – Tupac and Snoop for starters have used Kleeer grooves in their work. This compilation is a great way to find out about their strengths in muscular but insanely infectious funk, featuring the best from their 7 LPs (my they were hard workers!) and a detailed band history in the sleeve-notes. Perhaps this re-evaluation of their work will lead to Kleeer getting a bit more respect because, yes Chic were a great band, but they weren’t the be-all and end-all of Funk in the late 70s.

Though it is a shame that Kleeer never made their mark at the time. They certainly had much to offer and provided a quirky sense of humour that was lacking in a lot of comparable groups, as demonstrated in “De Kleeer Ting” for one. But it’s possible that with the overload of groups playing something akin to them, they just got lost in the rush. A shame because as this collection shows, Kleeer deserved more.