Home Blogs Klaxons – Myths Of The Near Future 15th Anniversary 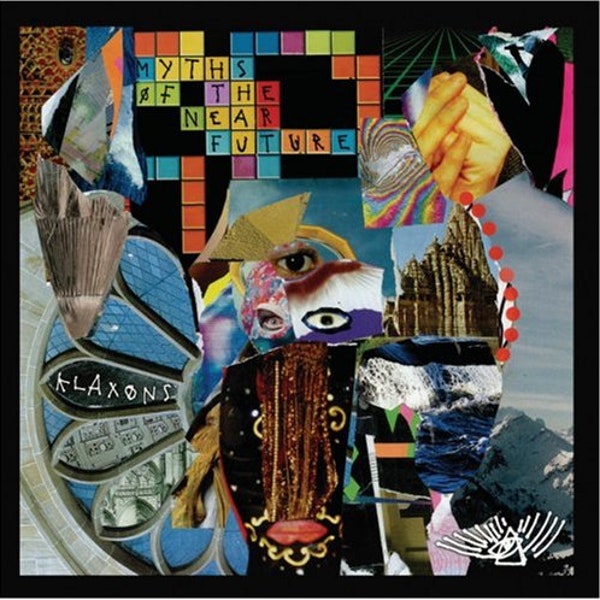 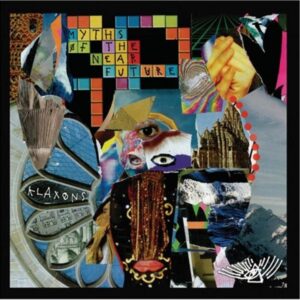 Klaxons – Myths OF The Near Future

15 years on from its release, Amy Britton looks back at Klaxons postmodern odyssey of a debut album, Myths Of The Near Future

In the summer of 2006, something caught my then-nineteen year old self’s attention in the most rare and exciting of fashions – the fashion that makes you sit bolt upright and take notice upon hearing something, ears opened and senses awakened by what was initially just the radio on quietly (now instantly turned up) in the background. It was the sound of a whirring Nineties-style siren over rapid-sire postmodern lyrics and a bold and exciting guitar breakdown. It was Atlantis To Interzone by Klaxons, and it was like nothing I had heard before.

It wasn’t just my attention which had been grabbed by this statement of sound, as Klaxons would go on to become the ringleaders of what the music press dubbed “Nu Rave.” While history may not have been kind in casting any kind of cohesion over the genre, at the time it seemed a fair description of a sound which blended the dizzying hedonism of the late eighties and early nineties rave scene with something original – plus the movement managed to produce some genuinely great records. It is perhaps Klaxons debut, Myths Of The Near Future, which remains the time capsule item.

Released on 29th January, 2007 – my twentieth birthday, to be precise, during an era which had seen student unions and indie clubs morph into migraine-inducing rainbows with the neon uniform of Nu-Rave – Myths Of The Near Future had a lot of hype to live up to. Produced by James Ford, himself a creator of solid Nu-Rave with Simian Mobile Disco, Myths Of The Near Future would maintain the otherworldly feel of their singles throughout and – for me at least – lived up to all expectations. Its title is drawn from a JG Ballard anthology and the influence of postmodernism and cyberpunk runs throughout. Of course, a Ballardian influence in alternative music is far from something new – the influential science fiction novelist had been an overwhelming influence on many acts, lyrically infusing songs such as The Normal’s Warm Leatherette and Joy Division’s The Atrocity Exhibition to name just two – but Klaxons certainly did a great job of capturing his “five minutes into the future”  voice and sustaining it across an album.

Opener Two Receivers is the perfect sci-fi scene-setter, its chorus of “in space, two receivers turn away”  almost sounding like Earth is being viewed from an outsiders perspective. Even the albums biggest hit and commercial crossover, Golden Skans, has a Ballardian theme lurking beneath its accessible chorus.

Further literary influences from William S Burroughs to Thomas Pynchon colour the album – the song Gravity’s Rainbow draws its title from Pynchon’s classic 1974 novel, considered to be the definitive moment in postmodern literature. In many ways, postmodernism is exactly what this record is all about, fusing both elements of the original rave scene with a new sound, or mixing lyrics which evoke the most ancient of mythologies, such as the Mayan prophecies and totemic ideology, with the metallic futurism of science fiction. The result often feels otherworldly, reflecting the narcotic aspects of the rave revival scene (the lyrics sometimes reach the delightfully absurd, such as Totem On The Timeline, describing meeting “Julius Caesar, Lady Diana, and Mother Theresa” at Club 18-30.

In spite of the era of hedonism and MDMA becoming popular again, it is an inaccuracy to look back on Nu Rave as simply a good-times party genre. If Myths Of The Near Future is to be seen as its definitive album, then not only does it run much deeper than mere party vibes, it is also undercut with swathes of darkness throughout.

Isle of Her has a sense of hot, uncomfortable foreboding of exploring forbidden lands with its chant of “row…there’s only seven more miles to go” leaping into monstrous mythology (cyclops, prized jewels) with even more monstrous possibility (the taboo of cannibalism.) Standout track Magick plunges things darker still with its theme of the dark arts – specifically, Aleister Crowley and the Hermetic Order of The Golden Dawn. Crowley was a long-term favourite of the counter-culture, but rarely had a musical reflection of his work seemed so fine-tune – the chanted verses feeling almost like a dark arts spell before the thickly laid guitar line bursts forth like a powerful consequence. If all that wasn’t enough, the album closes with a theme that is the ultimate of endings – Four Horsemen of 2012, a reflection of the arrival of the apocalypse delivered with all the drama of the book of revelations. Sandwiched in all between this, even a cover of Grace’s innocuous early Nineties dancefloor hit Its Not Over Yet has a mild sense of threat.

The Mercury Music Prize winner that year, and also something which captures an era by cutting and pasting others, fifteen years later Myths Of The Near Future still sounds as innovative as ever, and deserves to transcend genres and labels  to simply be called a modern classic.

All words by Amy Britton. Find more on her archive https://www.louderthanwar.com/author/amy-britton