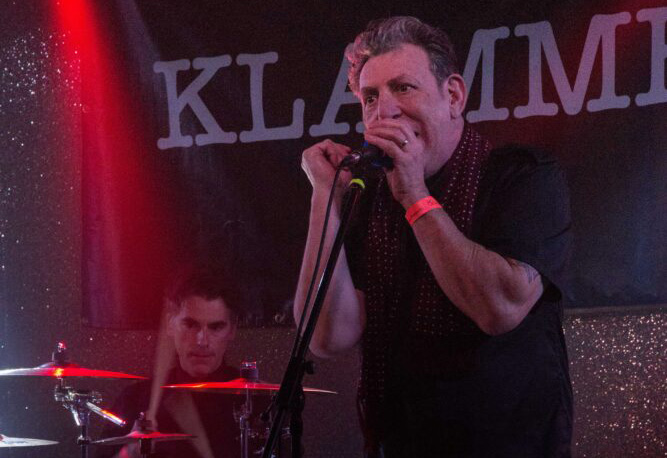 When a band doesn’t know how good they are it can take live gigs in one of two vertical directions. In Klammer’s case, it’s the right one; you feel they’re straining for an unattainably direct perfection and in the process achieving artistic brilliance almost unawares.

Conversations at the renowned Leeds gig venue buzzed with a renewed appreciation for live music when Hull’s Reardon Love kick-started proceedings, their catchy ’80s guitar and programmed keys winning over the uninitiated. Wonders of the Yukon’s gorgeous Americana-infused northern indie rode in next, lassoing the attention of young and old alike with old and young songs. They dedicated Rachel (And All The Goofs And The Stars) to Mark Lanegan, whose loss we’d learned of the previous day.

Klammer warmed into their album launch set with two new songs – Pass The Test and I Really Really Want To Believe – very much in keeping with previous, well respected, goth-leaning post-punk material. Steve Whitfield’s guitars channel the spirits of Killing Joke and the Banshees, resting on the very sound foundations of Mike Addy’s slick, driving bass and Bruno Almeida’s solid Missionesque drumming. Lead vocalist Poss Strickland’s lyrics provide both immediate and longer-lasting rewards while his throaty, tender vocals are as reminiscent of Bryan Ferry in Roxy Music as they are of Jaz Coleman.

But during the third song, the sense grew that the new album, The Day Before Yesterday, could be something more than an extension of a quality catalogue. Klammer rarely waste a soundwave, but the sheer efficiency of emotional effect of Heartworm on the audience was palpable. 2016’s High Life channelled that energy into dancing at the front which never stopped, and then Broken Dreams In A Crashing Car, the album’s first single, felt like getting a bit close to a black hole – Strickland’s scorchingly resolved dissonance in the chorus preserving us forever on the event horizon, the verses having accelerated us there irresistibly. While You Sleep then changed the pace to chilling effect: “We are made of stone, porcelain and bone/ We will crack like glass when we are all alone.”

The frontman’s presence was potent, combining the ease and purpose of a puma on the hunt. What was he hunting for? Not a reaction from the audience – he does not cajole, but engages with intense eyes and gestures that are as deliberate but less theatrical than Jarvis Cocker’s – it was something internal, an artistic height. It’s a height the new songs achieve, twisting as they do through shadows and tall trees, relentlessly relevant in their lyrics.

I found myself singing to the anthemic Oblivion despite never having heard it before, and wishing the new single Progress (Or The Lack Of) would go on longer. Strickland introduced Alone as a lockdown song sent in parts to “genius” Whitfield who stitched it together. It was meant as a compliment to the guitarist rather than the song, but Alone was perhaps the most revelatory of the new songs – the album’s finale – which ground through a hell of “haunting mills” and “bully boys” towards the catharsis brought by an unexpectedly wide open riff as Strickland urged us to “live an excellent life and try to stay true, true, true, true, true”.

Some tried and tested songs encouraged loyal supporters towards the end, one fan convincingly incarnating the Spiral Girl of the 2018 single, but once again the power of the new material shone through. A Long Cold Summer’s bass and drums pounded us relentlessly with the despair of the betrayal explored in the lyrics, while The Insider walled us in with glorious noise.

Most album launches run the risk of showcasing too much new material at the expense of the pleasures of the familiar. But then most albums aren’t The Day Before Yesterday.

All words by Matt Carmichael