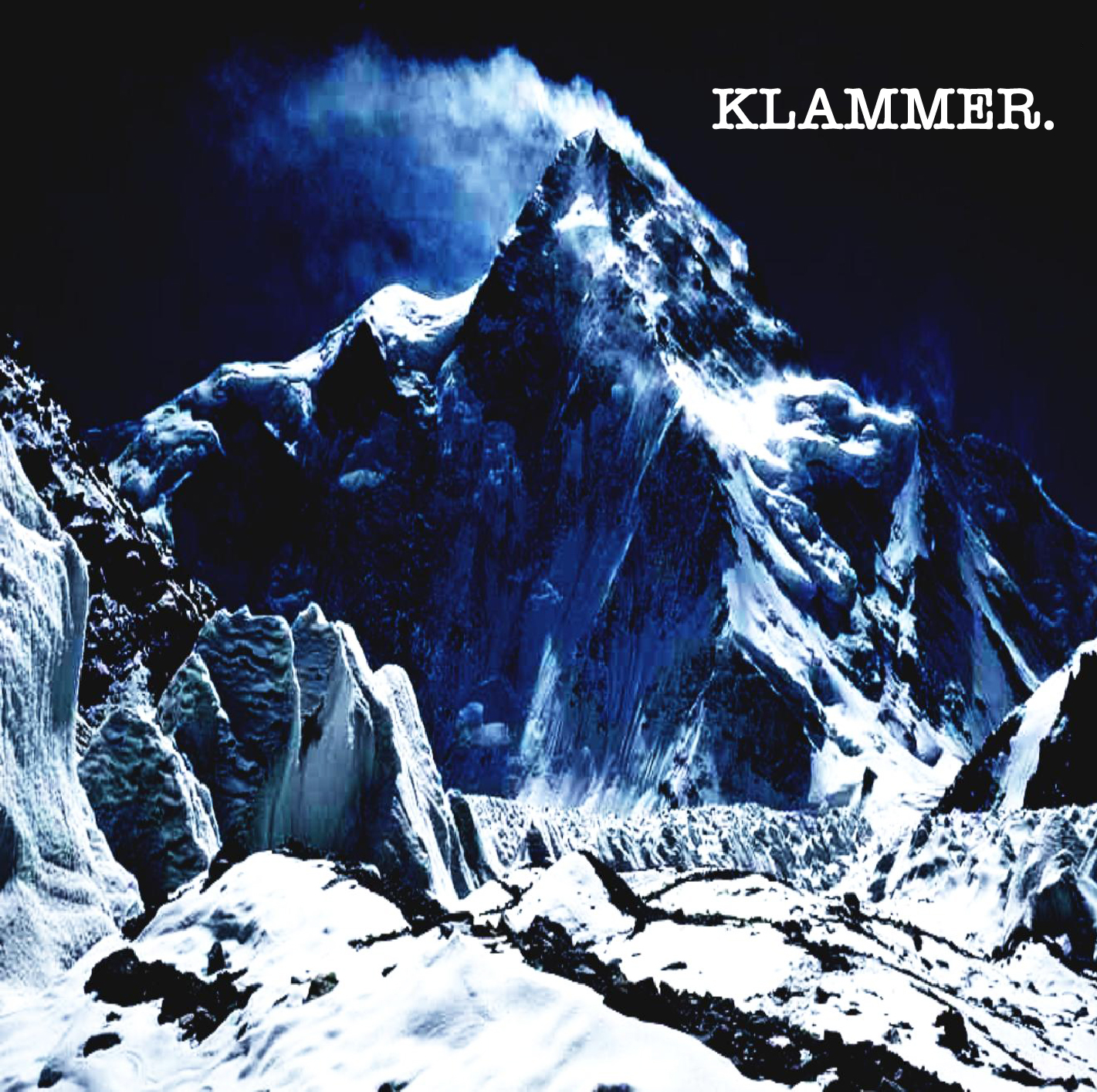 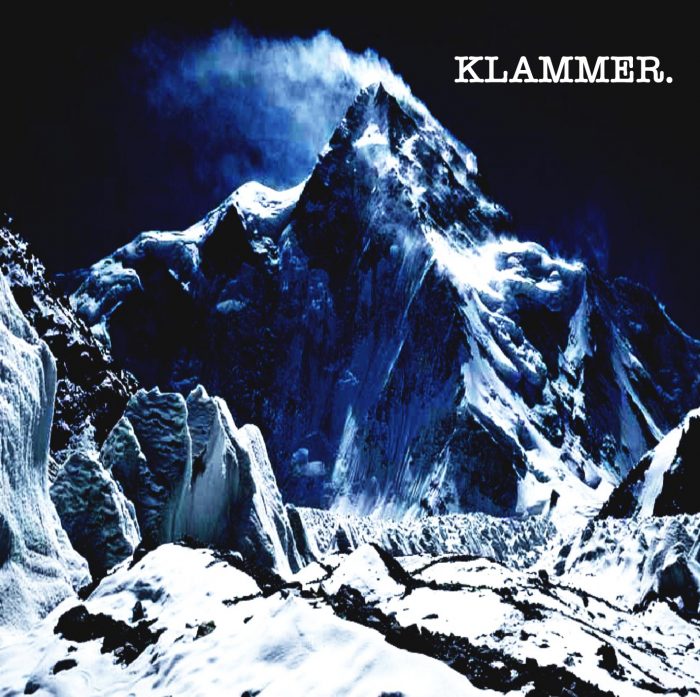 Klammer – Jordan Stead (Bass Guitar), Paul “Poss” Strickland (Vocals/Guitar), Steve Whitfield (Guitar/Vocals) – post punk dark pop band from Leeds formed in 2014, their music is dark, loud and melodic. They supported Richie Ramone, The Membranes, Art Brut, Department S and 999. Steve Whitfield was also Mixer/Engineer on four albums by ‘The Cure’. In August 2016 the band played at The 100 Club in London supporting Penetration. Their 2nd album “KLAMMER” was released in Spring 2016. The band also had a tour in U.K. with Richie Ramone and his band. Sophie Luchinsky (Louder Than War) talked to Klammer to know more.

“Louder Than War: Could you please tell me about your new eponymous album ‘Klammer’?”

“Steve: I think it’s darker than the first, a more focused and coherent album. Straight away it was going to be different from our first one. As we recorded the first album ‘Auslane’ we weren’t really a full band, we hadn’t even played live at that point. It was just a collection of songs that Poss and I had written. Where as ‘Klammer’ was written, rehearsed and then played live before we recorded it. ”

“Louder Than War: How many albums have you released?”

“Steve: There’s two albums so far ‘Auslane’ and then the new one ‘Klammer’. We’d already self released ‘Auslane’ ourselves in 2015 but when we signed to Under Dogz Records they re-released it and then released the new album. So both came out on UDR earlier this year.”

“Louder Than War: Could you tell me about your previous albums, their meaning and the main idea of the albums?”

“Steve: ‘Auslane’ was just a collection of songs but ‘Klammer’ was designed to be an album where all the songs complement each other and work as an album. ”

“Poss: For the first album Steve and I were looking for something that connected both of us. We started off with trying to think about the M62, which of course runs between Leeds and Huddersfield. We ended up picking a small village near to where I live, where we joined or left the motorway. It is called ‘Outlane’, so we just modified the name of the place to make it sound more European like the band name.  The sessions which led to ‘Klammer’, the second album, had a working title of ‘K2’, I don’t know if anyone noticed the clue in the album artwork we created for the record? ”

“Louder Than War: Tell me please about single ‘Everything Depends Upon The King’” 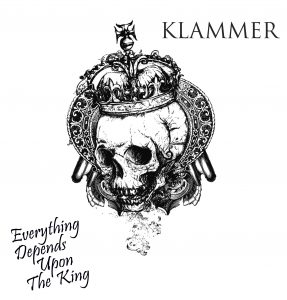 “Steve: ‘Everything Depends Upon The King’ has just come out on Curious Fox Records and is exclusively available from Rough Trade. ”

“Poss: I wrote the lyrics after reading a history book. It’s all about how power often leads an individual into an almost delusion arrogance and, ultimately, leads to their demise. ”

“Steve: The video was fun to do. It was all filmed at double speed and then slowed down. So we had to mime to the song also at double speed. It sounded like Alvin and The Chipmunks as the people of Leeds passed us by! ”

“Louder Than War: Could you tell about the most definitive songs on your last album? What did you mean by them?”

“Steve: I think I’m most pleased with ‘High Life’, ‘And This Is How The West Was Won’ and ‘Everything Depends Upon The King’. They all sound like the same band on the same record but at the same time are three very different songs. So far all the songs have been written by Poss and myself but the 3rd album will be the whole band getting involved. ”

“Poss: Yes, ‘High Life’ is one of my favourites to, it’s such a fun song to perform live. The lyrics are about not wasting time thinking about taking action, but getting on with life and living it to the full.  ‘Heavy Weather’ is a special song for me, it was the heaviest thing we’d done up until then and finishes the album. I think it gives a pointer to how the next record will sound. ”

“Louder Than War: Would you call yourself a Post Punk band or Dark Pop band? Why?”

“Steve: Personally neither but people always want to put bands into boxes so sometimes you have to give yourself labels to help promote yourselves. So I guess if you push me we are a bit of both. Most fans of music don’t just listen to one style of music anyway, but saying that we do seem to go down well with people who really like Punk, Post-Punk and Goth music, so maybe we aren’t any of those but a little bit of all at the same time! ”

“Louder Than War: Which bands have influenced your band? What you think about them?”

“Steve: I think everything that I’ve listened to and liked over the years has influenced me. From The Sex Pistols and Kraftwerk to The Fall and Boards Of Canada. There’s also the usual list of bands that most people have been influenced by: The Beatles, Bowie, The Velvets, etc. ”

“Poss: David Bowie, early Roxy Music and Joy Division amongst many others. ”

“Louder Than War: You supported Richie Ramone, The Membranes, Art Brut, Department S and 999 amongst many others. What could you tell us about those bands?” 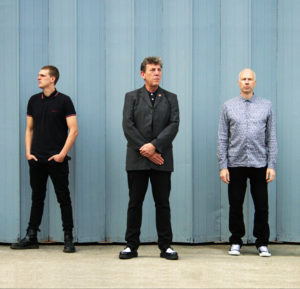 “Steve: We supported Richie last Feb on his British Tour and we got on great with him and his band. We also learnt a lot from them about what’s needed to put on a good show. I loved playing with The Membranes, as Dark Matter/Dark Energy was my favourite album of last year and they were great live too. We also got on really well with Department S, really great guys. Pete Jones (Dept S and P.I.L.) has just done a remix of one of our songs. ”

“Poss: Richie and his band were really great people, it was massive fun touring with them. So I’m delighted that Richie asked us back on tour with them in November and December this year!  They say you should never meet your heroes but, but for me personally, meeting Eddie Argos from Art Brut and seeing them perform was magical. He sang ‘Klammer’ over and over again at the climax of the song “The Replacements”!!! ”

“Louder Than War: Steve you work in the studio as a producer and engineer and have worked with ‘The Cure’. Could you tell us more about it please?”

“Steve: I engineered on their ‘Wish’ album and spent 6 months living with them at a fantastic residential studio in Oxfordshire called The Manor. It was the best time I’ve ever spent working in the studio, brilliant people to live and work with and great music! I’ve done a lot of other stuff with them but that was the highlight. ”

“Louder Than War: You recently supported Penetration at the 100 Club in London. What was it like?”

“Steve: Playing the 100 Club was something special for us, you could feel the history coming out of the walls. The list of people who played there are a who’s who of rock music. Penetration had sold it out and 350 people were already in by the time we hit the stage! A great atmosphere. I think it’s important that venues like this across the country are kept going and that fucking developers aren’t allowed to shut anymore. We’ve lost too many over recent years. If you want a quiet street then don’t move into the centre of a city, move further out of town! For me the high points so far have been the first tour and then playing to a packed room at the 100 Club. ”

“Poss: Yes, likewise, all gigs are special but touring is so much fun. The 100 Club was exhilarating! ”

“Louder Than War: What’s coming up next for Klammer?” 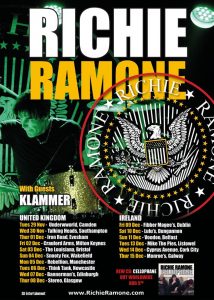 Steve: Richie Ramone has asked us back out on tour with him this Nov and Dec, but this time it’s a UK and Ireland tour. 16 dates in 17 days, so it’s going to be intense! Check our website for the dates. We’ve already written most of the next album and have started to rehearse some of it. So hopefully we’ll record it next summer. Poss would love to go to Hansa in Berlin to record some of it. ”

“Poss: I think I might I need a lottery win before I can ship us all out to Berlin but it would be so good to stay on Potsdamer Platz with Hansa just around the corner. Although it’s looking like we might do some gigs in Germany next year, so may a day or two in Hansa to get the drums done could be possible! ”

“Louder Than War: Thank you.”