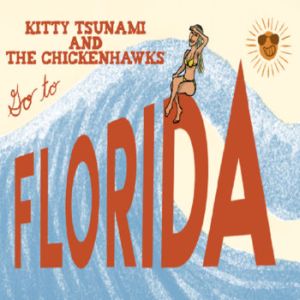 Side A of this split is Asheville, NC’s Kitty Tsunami, who connected with Ghost Drag after playing with label founder June Summer’s Plastic Pinks at Tiger Mountain on July 21st, 2015.

The name Kitty Tsunami was coined to incorporate vocalist/rhythm guitarist Megan Caldwell’s affinity for waves and cats, and unsurprisingly, their sound is light and charming, Best Coast-ish beach pop. Megan and lead guitarist Tommy have been playing music together since high school, and Kitty Tsunami spawned 2 years ago from various side projects and jam sessions, so it’s kind of like a family band.

They describe the Go To Florida tape as a ‘concept album’ done ‘vacation Chevy Chase style’, although listening to it has not yet thrown me into an embarrassing, profanity-strewn Rusty Griswold disaster predicament. With song titles like “Beechin’”, “Beech Plz”, “Shrooms” and “Surfs Up”, you already know what you’re in for; carefree summery odes to cruising and hanging out, with some occasional recreational drug use.

Side B is a little less sweet and comes courtesy of Bushwick, Brooklyn transplants to NC, The Chickenhawks. I saw them many times at Death By Audio while they were local, and remember Sam always climbing stuff, surfing on the speakers, or dismounting the stage to sprawl on the floor during a solo. This is dirty sidewalk surf with a supernatural hip-swiveling twang, or as the band describes it on their Facebook bio, “Like a shitty transistor radio playing the oldies station in a cave.”

“Chicken Fried” introduces the band with a greasy, bluesy instrumental strut and doubles as The Chickenhawks band theme. From The Soft Boys to The Monks to Minor Threat, I’ve always respected any band with their own theme song.

The Chickenhawks have the classic surf elements of big tone, heavy reverb and speedy Andalusian cadences, with some pretty typical Tiki lyrical imagery as well; “So grab your fishing pole/We’ll catch a nice fresh tuna/To make the hula girls think you’re the Big Kahuna”, Sam sings in the Hawaiian road trip fantasy below.

While it may be tempting to write a lot of this off as novelty (especially with a cover of Chuck Lorre’s Teenage Mutant Ninja Turtles theme song), “Knife Fight” is a cool echo chasm that devolves into an aqueous guitar wig out, and “Mexican Standoff” rumbles with the raucous scrappiness of Link Wray and the crazy staccato picking of Dick Dale. “Rainbow Confederate Flag” is all about rebel pride (“Don’t tell me what to dooooo!”), and beautifully shows how this familiar format can miraculously still feel insolent, contemptuous of authority and free. So just enjoy it and get wet!

Kitty Tsunami and The Chickenhawks Go To Florida is available here through Ghost Drag Records.