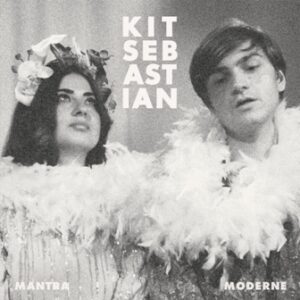 A strange thing happens to you when you listen to Mantra Moderne. The world in its current state falls away and you are placed at the heart of what is a borderless planet. Thoughts fly through time zones to meet and merge with the thoughts of another all in the name of communion. This is unifying and joyous with an added dash of beautiful attitude.

Kit Sebastian are Kit Martin (who composed all the songs and played all the instruments) and multi-disciplinary and vocalist artist Merve Erdem (who wrote all the lyrics) and is an album that mixes three languages (English, French and Turkish) together. Exploring those universal themes of love, loss, decay, language and ideology, Mantra Moderne is a pop album that fights against any perceived ideas and breaks down any resistance you as a listener may have to anything deemed that mostly irrelevant tag of “World Music”.

Over its nine tracks Mantra Moderne reveals itself to be a finely crafted and exciting pop album that walks a balanced line between sounding retro yet also futuristic. From the instantly thrilling intro to opening track Senden Başka right through to the hard hitting groove of closer Durma, Kit Sebastian takes your body on a trip through the resistance-is-futile dance moves it demands of you via a more cerebral journey into your emotional state clawing away any stagnant energy you may be withholding within and leaving you in a far stronger emotional state than when you first came knocking on its door.

One of the strongest features of Mantra Moderne is its clever hybrid of lo-fi aesthetics and hi-fi ambitions. It has a duality to its sound that bathes each track in a richness whilst retaining the essence of a duo crafting music in the most basic of surroundings. Tracks like Pangea and With A Sense Of Grace feel as raw as a White Stripes recording yet as full as something from a Broadcast album (the latter being an obvious touchstone of the duos sound). This hybrid is not only achieved by the production of the album but by that most important of elements…songcraft. Kit and Merve are obviously very skilled in the art of song writing and you get a sense that if the duo were just handed an acoustic guitar and microphone they would be able to write a song that would sound ageless.

An incredibly strong debut, Mantra Moderne is bursting at the seams with grace, wit, beauty and an irresistible groove. Its a meticulous record that allows rough edges to meld with warm pop aesthetics. A dance infused folk album that will hopefully catapult the duo straight into the homes of many across the world. Free thinking and free hip-shaking music that is captivating and addictive. Thoroughly recommended.