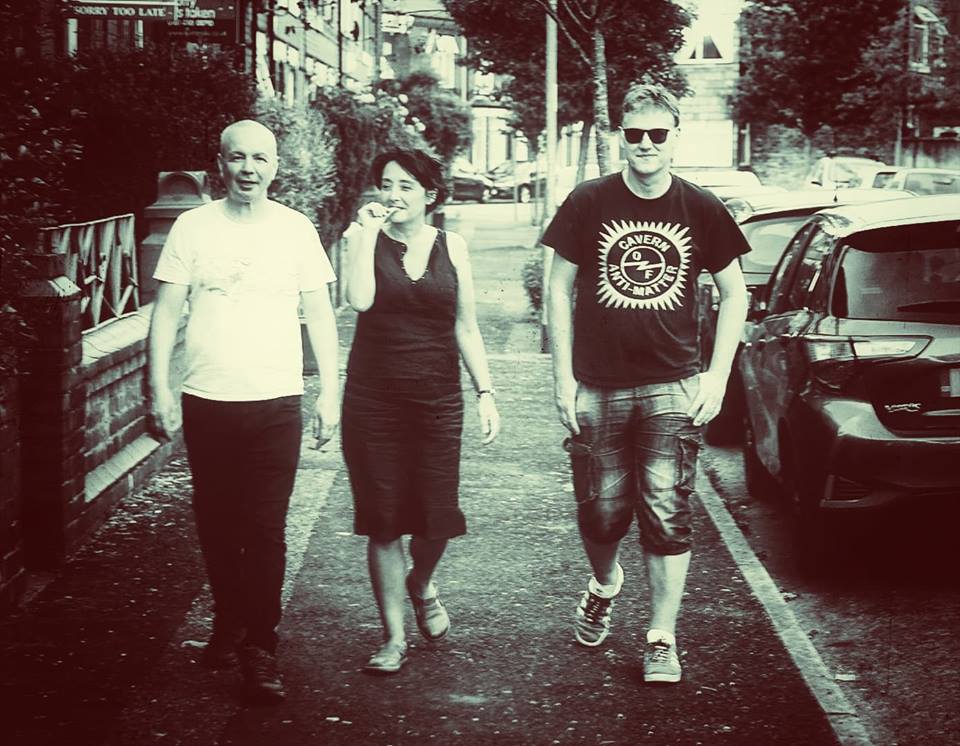 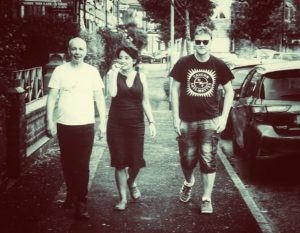 Salford underground lo-fi art-pop mavericks release their best work yet.  Which deserves to be heard by everyone, not just obscure post-punk connoisseurs.  And Ged Babey discovers a new word/expression to extend his vocabulary.

It’s kind of nerdy I guess but I do love finding the derivation of a word or phrase or expression.  I’m the same with band names generally speaking.  With KIT B I didn’t actually find out what their band name meant, if anything, because it is probably something incredibly dull and scientific. I was more intrigued by one of their song titles: Swisser Swatter.

Swisser Swatter refers to a (in)famous event involving Sir Walter Raleigh and the Queens lady in waiting: The gist is, he was having his way with her against a tree and she was murmuring ‘Oh sweet Sir Walter’ which came out as ‘oh swisser swatter ‘as she got  more and more … stimulated.

Danny Cusick of KIT B (in conversation online)

He loved a wench well; and one time getting up one of the Mayds of Honour against a tree in a Wood (‘twas his first Lady) who seemed at first boarding to be something fearfull of her Honour, and modest, she cryed, “Sweet Sir Walter, what doe you me ask? Will you undoe me? Nay. sweet Sir Walter! Sweet Sir Walter! Sir Walter!” At last, as the danger and the pleasure at the same time grew higher, she cryed in the extasey, “Swisser Swatter Swisser Swatter.” She proved with child, and I doubt not but this Hero tooke care of them both, as also that the Product was more than an ordinary mortal.

This is a nice EP.  Now, that may sound like faint praise, but it’s nice in that it’s retro-pop, light and agreeable, rather than being loud, uncompromising rock-noise.

German Shepherd Records plays host to all manner of left-field, experimental weirdness from lo-fi mavericks and releases literally hundreds of tracks every year…. which I always have a quick listen to, but this stood-out, like Toska Wilde who I recommended previously.

The title 4 Obscure B-sides is a neat nod to the content. Self-deprecating perhaps but these are not blatantly commercial ‘potential hit’ songs – but cool tracks none-the-less with a retro appeal in that they which could’ve appeared as B-sides on singles in 1980/81 on Mute or Some Bizarre records perhaps.   That said, they are not pure electronica – there is flanged guitar there and what sounds like real drums.   It’s a kinda Young Marble Giants relocated to Manchester sound with a touch of C86 and Kraftwerk thrown in.  It’s a nice (ugh! that word again) sound. An old-world charm, bedroom post-punk pop-for-The-Future.  Knowingly naive maybe. Or shy, discreet, Music For Introverts perhaps. I’m guessing, but I have met people like KIT B in the past: talented, thoughtful people who make music in private, rather than brashly in public, onstage in pub back-rooms full of disinterested beer-swillers who want to ‘party’.  KIT B would probably prefer a small audience of dedicated listeners.  (This is supposition m’Lord, lets stick to the facts…)

On this release KIT B are: Danny Cusick, John Montague, Vicky Middles and Craig Bodell. It’s Danny and John who are the main-men, the constants.

The four songs are:

Artificial Light which has a merry-go-round disco / early Depeche Mode feel to it, but gets a bit sinsisterly Psychic TV towards the end.

Vantablack is like a bedroom Magazine with great keyboard and guitar interplay. The lyrics are existential conundrums or Devoto-style paranoia parables. Move a little closer / Times are getting harder / Everybody wants their say.   Brilliant stuff.

Swisser Swatter I assumed to be a German phrase and the kind of song-title Kleenex/Lilliput would have used… until I asked… (see above). The clipped guitar is very Young Marble Giants, the keyboard pattern is wonderfully simple and effective and the vocal unassuming, but suggestive… Stir the honey-pot / Hit the sweet-spot.  The overall ‘groove’ is just incredibly infectious without being obvious.  It’s a classy, subtle, sexy piece of pop, with an interesting back-story.

Vox Hulme Anna (1985) has a distinct New Order meets C86 feel to it but overall reminds me of a lo-fi version of the Lightning Seeds (neither an insult or a compliment- Good band initially who became blander the more success they had…in my opinion). Perfect pop-song length at 3 minutes 10 seconds.

A neat, cool EP from the North which relocates sounds from the past into the here and now.

Listen To / Buy All of KIT B’s back catalogue Here.

Photo from KIT B facebook – photographer will be credited on request.