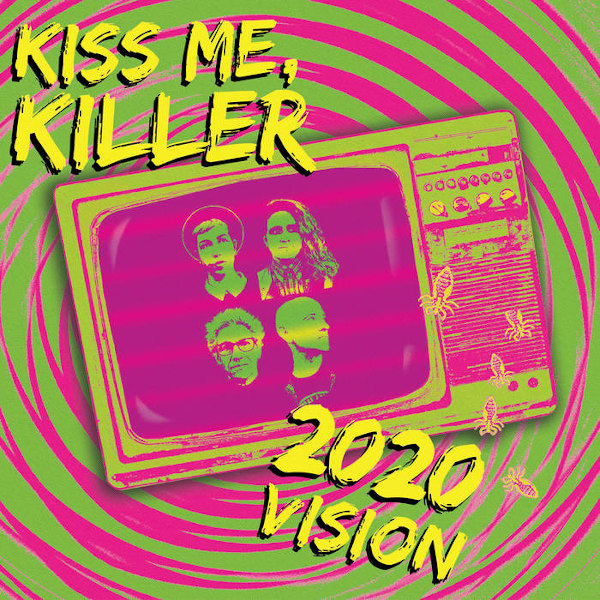 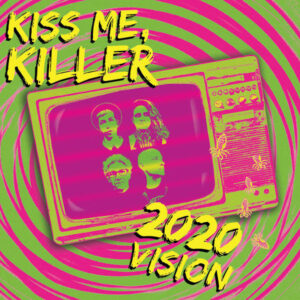 Swirling together a dayglo vortex of first-wave punk, surf, garage, rock ‘n’ roll and post-punk, Nathan Brown says that Kiss Me, Killer will appeal equally to old farts who like punk ‘n’ roll as well as the young upstarts they sneer at.

From inside a swirling pink and green cover, emblazoned with dayglo yellow writing, out pops ten inches of neon dayglo, lime-green, snot-coloured vinyl. It’s the colour of slime, if you remember that from the 1970s? With the choice of horror font on the label, it also looks a little like a set of Slimeballs skateboard wheels from the mid 80s.

Kiss Me, Killer are a breath of fresh air, while at the same time familiar. The visual look takes me back to a time before punk rock was monochrome, when record sleeves and the records themselves tried to match the neon socks the punks were wearing. Musically, they manage to swirl together in their vortex elements of first-wave punk, surf, garage, rock ‘n’ roll and post-punk, but with a modern twist, rather than a journey into nostalgia – all powered along by AJ, who was also the drummer of Menstrual Cramps. 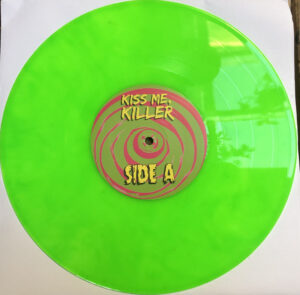 “I love lice,” singer Cat declares as the opening salvo. And Kiss Me, Killer provide a crystal-clear, critical tour of their world. With their 2020 Vision, they see all its faults clearly, and perhaps they see things other people miss. Lice, with its focus on bodily parasites, could have been written during the first wave of punk with its revolting connotations, and a suitable-sounding rockin’ guitar. Fans of X-ray Spex will dig this song, for sure.

Gentrification is a report on the blight their home city, Bristol suffers from… accurately described as “Economic Cleansing.” Alongside real-world socio-economic analysis, there is black humour: “Can’t survive on sourdough. Only want a hovis loaf, tin of beans and can of coke.” It’s a somewhat tuneful ditty with a garagey backing.

Sports Direct is a subversive, situationist take on working for a shite employer. Starting off with a decidely 60s intro, it gathers speed quickly, taking on some of the sonics of early Subhumans singles – especially the guitar solo. Surreal cartoonish horror tale, Kevin The Kitchen Crab finishes off side one.

Ego Lycra Cycle Man kicks off side two, propelled by a chunky punk rock bassline, and some twinkles on the guitar, a la Captain Sensible. It looks at another problem of modern city life that seems to go hand-in-hand with sourdough-powered gentrification. A rant that could be pure bile against bikers instead occupies the piss-taking high ground: “I’ll fix my bike with special spanners. Got no graces, got no manners and all the gear and no idea.”

In case you didn’t get all the clues (obnoxious prick, a waster, a hater, tales spun with lies), they make it clear on the lyric sheet that the song Rotten is about Nigel Farage. To be fair, it could have been about that rotter Lydon! Working up a head of steam, it grinds to a DK-esque halt, before firing up for one last round of the chorus.

Megabus is part tribute, part lament to the cheapest way of getting around, with another dose of sardonic humour. It’s not breakneck by today’s standards, but the riff makes it a speedy little number. They’ve got a catchy descending chorus in, “Riding on the megabus, no need to make a fuss.”

Rat Race starts off subdued, with harmonics on the guitar and some intricate bass noodling before the drums kick in and it builds into a twangy tune. More amusing lyrics dismantle the life of people who buy into the rat race of the title. And the chorus just nails it: “Suck it to the bankers; we all know they’re wankers.” This song reminds me of Belfast anarcho-punks, F.U.A.L. – it’s a combination of the vocal delivery and the number of words crammed in, the rambling basslines and the guitar tone. This is no bad thing. 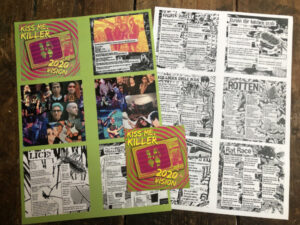 I’m predicting 2020 Vision by Kiss Me, Killer will do well. They’ve got bounce. They’ve got swing. They’ve got punk rock ingredients, but their own recipe, so they aren’t easy to pigeonhole. And most of all, it will appeal equally to old farts who like punk ‘n’ roll, as well as the young upstarts they sneer at.

There’s a nice booklet with a suitable ‘cut and paste’ page for each song and the CD version comes in an A5 envelope, with an A3 poster version of the lyric book – another release for Grow Your Own to be proud of.

Get it from Grow Your Own.