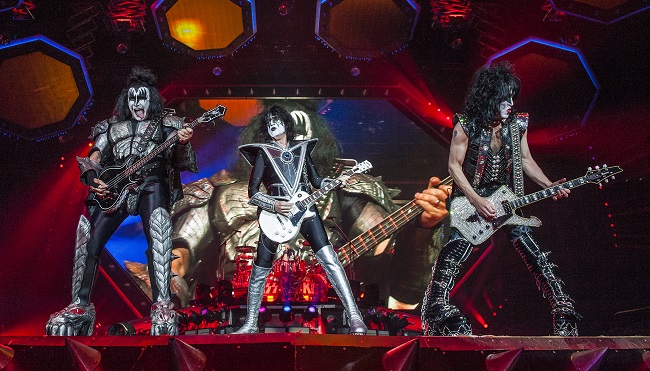 The Kiss – End Of The Road World Tour reaches Manchester and Nigel gets more than a few flashbacks! He reviews for Louder Than War with photos by Mike Ainscoe!

I’m a time traveller you know? Either that or it was someone else. His memories which have invaded my mind and convinced me that I saw Kiss in Manchester on May 13th, 1976. Apparently, me and a mate called ‘Tank’, that’s it, went to see them on their first ever UK tour. It was memorable for the fact that they looked completely outrageous (since glam had petered out 2 years previously); Gene Simmons dripped blood from the longest tongue you ever saw, and Ace Frehley fired rockets out of the head of his guitar. Along with the flares which shot from the stage and the loudest Marshall stack sound system I’d ever heard (I had ringing in my ears for days!), it was the unashamedly the daftest, most thrilling gig I had ever been to in my short life! I rushed out and bought their debut UK single Shout It Out Loud, then punk came along and that was it. 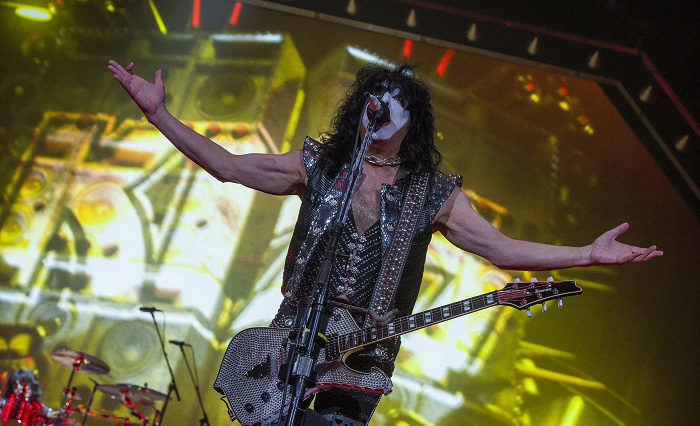 Tank, on the other hand, along with another mate of mine who I won’t shame here, thought differently. They went out and bought the album Destroyer, which had just been released. By the time Double Platinum came along in ’78, these two daft heads were still buying Kiss records; ardent fans! The subject of unreserved pi*s taking by yours truly who was entering his ‘Joy Division’ phase!

Anyway I digress, they are back! Bigger and louder than ever, on their (supposed) last ever tour. With Stanley at 67 and Simmons knocking on 70, it’s clearly time to hang up the platform boots and call it a day. That they played Manchester’s Arena before quitting was testament to their longevity and something I just had to see!

“You wanted the best, you got the best. The best band in the world…. Kiss!” growls the announcer, as the huge logo-adorned drapes drop to reveal the band descending to the stage on light studded circular platforms. Launching straight into Detroit Rock City, the beats punctuated by explosions and huge flames shooting from the stage. You can immediately feel the intense heat. As one guy said to me afterwards, ‘ How close were you? You’ve still got your eyebrows then?’.

Stanley’s voice still has the power to deliver although I wasn’t aware of his effete lisp back in ’76, and I’m sure that Simmons played much more of a pivotal role. Tonight it’s all about Stanley, the consummate rock god who is only really bettered by Alice Cooper in his stage presence and vocal ability. The ‘Starchild’ whose make-up hasn’t changed in the intervening years apart from the ‘au naturel’ phase during the early ‘80s! (OK, and apart from a brief dalliance with ‘The Bandit’ in ’73-’74!). God forbid I get pulled up by the Kiss Army! 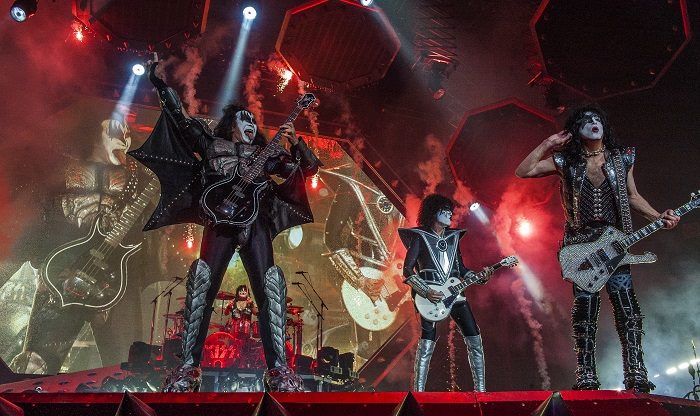 “The first time we played here was the Free Trade Hall in 1976” shouts Stanley and I nod sagely to the guy standing next to me from another magazine. “Let me check where the craziest people are tonight” he continues, before starting a shouting contest between various sections of the crowd. You can’t knock the dedication of the fans; this is high camp and they are just lapping it up! They storm into Shout It Out Loud, with its big guitar solo and Simmons, bat cape and all, boogies with the crowd; staggering backwards and forwards In his dragon eye glitter boots.  “Awesome Manchester “ screams Stanley as they lead straight into Deuce.

It’s a volley of Kiss hits from thereon in, I Love it Loud, Heaven’s On Fire and War Machine with its huge dragon backdrop video and repeated flares, and man, I’m getting hot! Calling Dr Love gets one of the biggest audience reactions of the night, “Cos we love yer, I’m gonna call the Doctor, Doctor Love!” ; Simmons on vocals and Stanley’s backing sounding more NYC and camp than ever!  There are times during the gig when Simmons visibly hangs back allowing his bandmate to take the lead and trust me, there are some epic guitar duels between him and Tommy Thayer, who inherited Ace Frehley’s Spaceman lead guitar make-up.

At one point Stanley takes to one of the platform, stage right to deliver an amazing guitar solo. Making eye contact with an enthusiastic fan in the lower tiers, he plays directly to him, waving his arms in unison. At the end of the track, he flicks his guitar pick directly him. When he sees it miss its mark, he flicks another one. It’s this kind of connection with the audience that reveals the man’s true showmanship.

With his whoops and “Hey Manchester” screams, Stanley leads his band into Psycho Circus, “At the end of our show we’re all out of our minds and at the end of the show we like to be sophisticated – but now we feel like animals!” – on one level it’s hilarious but in the moment it’s pure entertainment and no one really gives a fuck if it’s a bit cheesy – they’re just having a good time, and quite frankly with the best part of half a bottle of wine inside me I’m just going along with the fun!

With Drum, Guitar and Bass solos the gig has everything a ‘70s performance should have – at one point during 100,000 Years Eric Singer drums way up high on an ascending platform – Gene Simmons gets the same treatment, strumming his bass from 40 foot above the stage, spitting blood and playing to the crowd with that huge tongue!

“It’s awesome to be here tonight – there’s nothing I’d like more tonight than come out there and be with you. I can do it too but you have you invite me” “Say my band as loud as you can” and at the repeated screams of Kiss, Stanley is deftly transported above the crowd to a small platform at the back of the arena! Draped in purple light he launches in to Love Gun followed by I Was Made For Loving You which gets the whole crowd up and singing along.

They encore with Beth followed by Crazy Crazy Nights and those in the crowd who still have the stamina are on their feet, singing along wildly. The band closes with Rock and Roll All Night, a fitting end to an amazing gig. 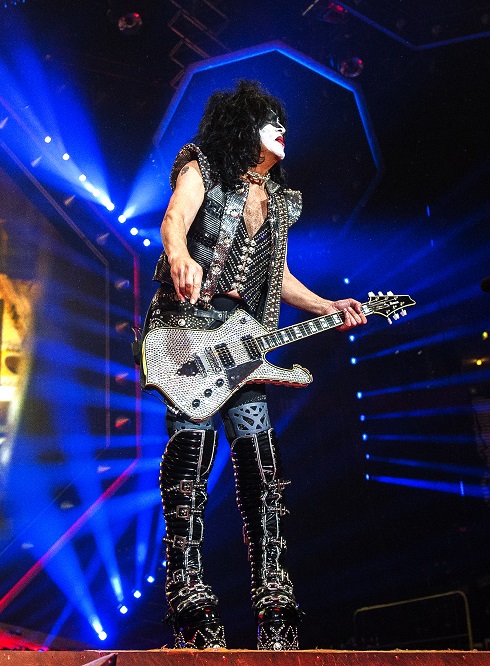 I never thought I’d say this but with age brings maturity and whilst I love the cold hard monochrome-metronomic thud of post-punk, you can’t beat a bit of circus. Kiss laid it on thick in more ways than one; their amazing performance belying their advancing years, and I bloody loved it. We drifted off into the warm Manchester night to God Gave Rock ‘n Roll To You blasting over the PA – a track they had missed out; but with Argent’s original one of the faves of my time travelling self from way back when – it was a most welcome serenade.

Shout It Out Loud

I Love It Loud

I Was Made For Loving You

Rock and Roll All Night