Kirk Brandon – Spear of Destiny 30 Years and Counting. A Louder Than War interview.

Hard to believe we know but it is true, Kirk Brandon has now been leading SOD for 30 years. To celebrate this fact a 6-week European tour in October and November 2013 is being undertaken.

These very special concerts will contain tracks from all 12 SOD studio albums, a new song from 2014’s new album “Thirty-one” and a previously little heard gem from 1984, Institution.

To coincide with the tour a career spanning box set, Spear of Destiny “Thirty Years and Counting” will be released on Vinyl, CD and Digital via kirkbrandon.com, Code7 Distribution and The Orchard Digital Platform.

Louder Than War: How are you? I mean, I know that you had heart surgery in 2011, but you have been working like a horse ever since so assume/hope that you are at peak performance?

Kirk: This old war horse will run till they drop it with a bullet to the head. I decided to continue my life as I have lived it. To the full and as a free thinker. Heart surgery in 2009 and 2011 unfortunately for some, didn’t kill it.

I try to keep a light fitness campaign going what with light weights and cycling and spurts of skipping….which reminds me….get back on it Marine!

Do you still have time or indeed the energy to oversee Eastersnow? (Eastersnow is Kirk’s recording company)

Kirk: Eastersnow comes together when its needed and when it is needed it pays attention.

I recently produced a couple of guys who write great songs, ‘Folk Grinder’. Well worth checking out.

What are your plans for this year? (Including the 30th anniversary celebration gigs)

Kirk: This year in the run up to Xmas, we have the 30 Years Celebration Tour of Spear. This is probably the biggest undertaking in decades. It’s an incredible heritage to have to live up to, from ‘The Grapes of Wrath’ through to the critically acclaimed and fan loved ‘Loadstone’ right thru to ‘Omega Point’, the last album.

A body of work spanning in its entirety, 30 years. I for one never imagined it would, or I would, actually last that long. So, for this tour, it will be from all of its ages thru the looking glass. We are also putting together a box set with unreleased material on sale at the shows.

What are you listening to and reading at the moment?

Kirk: I have been listening to a bit of ‘XX’ and have taken an interest in the Boer War and all,it’s grievances and cruelties. Brunel sent the first Pre-Fabricated buildings out there on boats which were assembled in situ…..I enjoyed the experience myself in the East End of London for a few years as a lad….a pre fab bungalow built upon a grave yard….and yes it was haunted. Very modern building concept…the living and the dead, side by side in perfect harmony.

I read a while ago that you enjoy bicycling; bearing in mind how they are treated in this country what is the seduction?

Kirk: Cycling if I don’t sound too silly, is, freedom. At least that’s what it represents to me. I’ve been over the bars a few times but got back on it asa. You have get on the old bike don’t you.

The Dead Men Walking project was a huge success; do you think you’ll ever get together again?

Kirk: Yes. But, it probably won’t be the same line up. Captain Sensible is still a good friend and always up for silliness. We played a cow shed in Scotland to 800 people and at the end in the freezing temperatures, he ran back on naked for the encores. Above and beyond the call of duty. No white feather for him! It’s bizarre but the kids love it! A gent.

I know that you are playing Brighton later this year and that you have a connection with the city, having been a tutor at the Brighton Institute of Modern Music in 2012, what was that like and what draws you to the coast?

Kirk: The tutor part is interesting as I have to translate what has taken me all my life to learn so kids between 16 and 22 can grasp the concepts and put them into effect in their own performances. Old heads on young bodies is quite difficult unless you have adequate machinery for the operation. Physically and mentally demanding.

As for the coast…I like living near water and in case I have to escape quickly. The Marina is up the road from here.

Kirk: Is Grunge, the 60s, Punk, Protest movements still relevant? The Overworld grows stronger by the minute…every single thing you do or say can be accessed by ‘Prism’.

Your Govt. acts without your consent and you have no recourse to change or stop it.

If ultimately you leave the running of your finances and food/oil/environment to these people and corporate society, then, We the People have lost. We have finally lost the right to self government. If we hide like ninnys in our red bricked rented accommodation and do not mount a challenge as and when applicable, then we are cowards in the face of these Eton educated numptys!

If you can pick and shoulder a rifle, you may have half a chance on the run. It may well come to that. History tells us of its inevitability.

And finally, why should people come and see you play live this year?

Kirk: Nothing lasts forever. Not even you. It’s heart and soul music. Music for music lovers. A celebration of a life’s work. The triumphs and the failures support each other in this pilgrimage.

All words by Ashley Gordon. More writing by Ashley on Louder Than War can be found here. 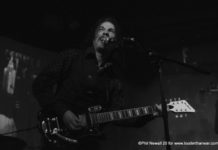 The Stone Roses at The Etihad Stadium – More Than Just...

October 3, 2013
We use cookies to ensure that we give you the best experience on our website. If you continue to use this site we will assume that you are happy with it.Ok