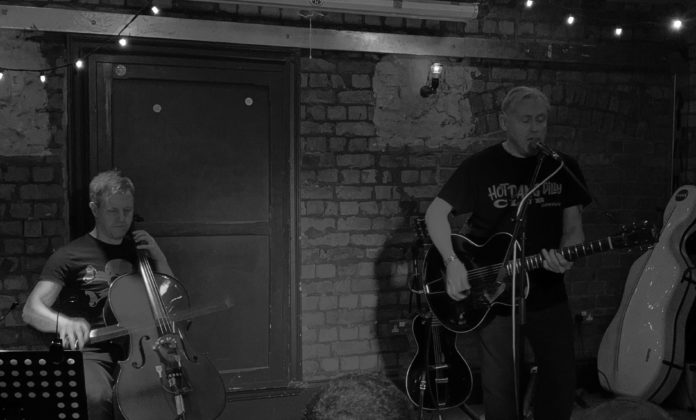 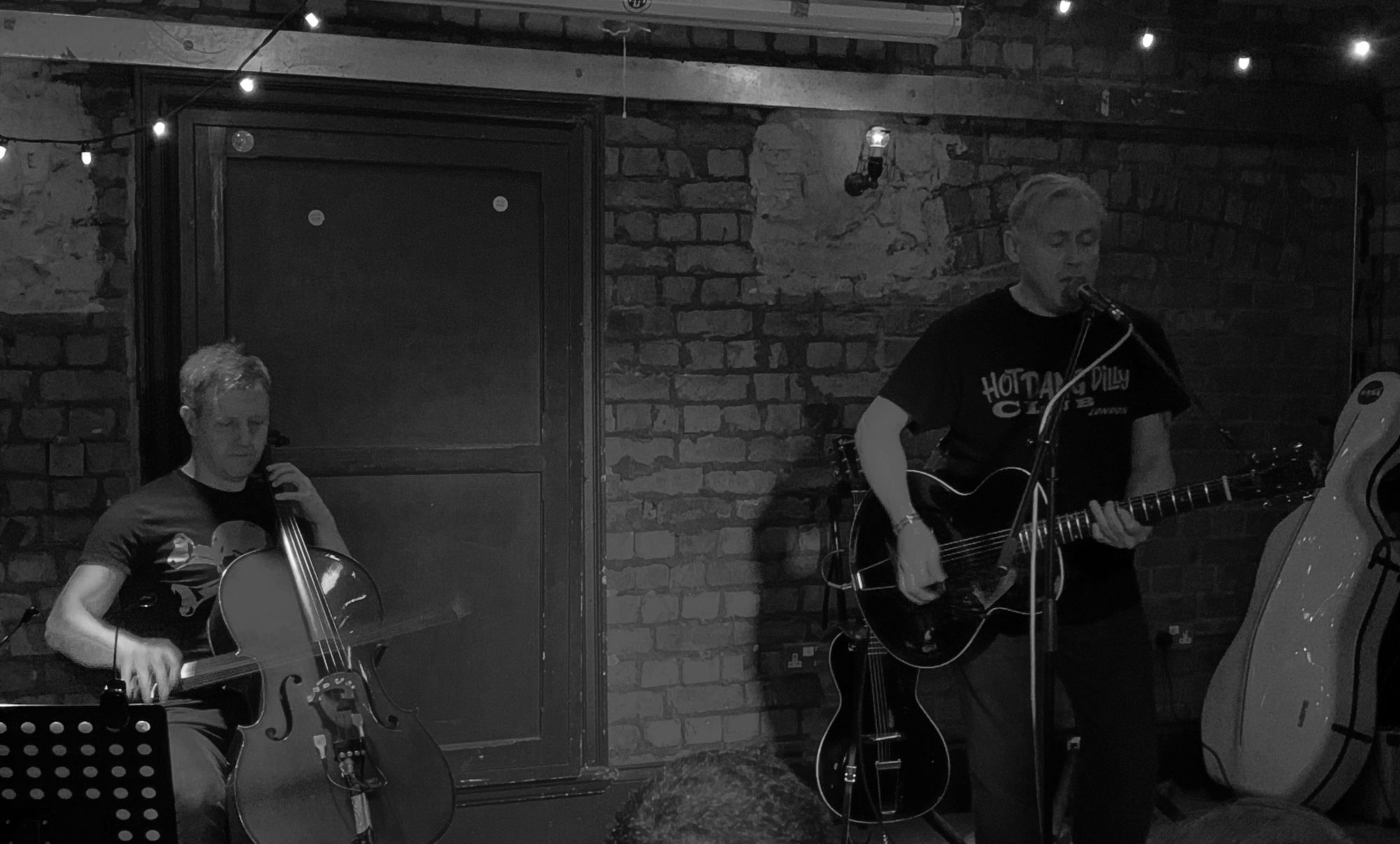 Kirk Brandon kicks off his no doubt industrious gigging year with a series of dates that fall under his ‘aKoustiK’ banner; tonight taking to the stage of a capacity crowd at the intimate Eagle Inn, Salford – the posters on the wall informing us that as a result of this show being a sell-out, he and cellist Sam Sansbury will be back at The Castle, Manchester in a matter of days.

Brandon, flanked by a seated Sansbury to his right looks relaxed as he steps onto the compact stage. Sansbury, a classically trained musician is surrounded by sheets of musical notation, apparently, he has scored all of the material that he and Brandon perform; which means he was busy ahead of these dates as Brandon had indicated he was keen to perform material not previously be visited under the aKoustiK guise.

If you haven’t visited the Eagle Inn, it’s a fairly unique venue, previously a traditional 2-up, 2-down terrace adjacent to the Victorian pub, when the building became available the pub owners snapped it up, ripped out all the floors exposing the roof beams from the ground floor, bunged in a stage, a microscopic balcony and a generous PA system – they even left a first floor fireplace in situ.

What all this does is focus the audience attention, as such when Brandon greeted us with the sincere “hello friends” a bond was immediately formed, a polite nod to Sansbury and opener ‘The Wake’ with rich cello tones blending exquisitely with Brandon’s acoustic strings transfixes all present, ahead of a haunting ‘Monday Girl’ that Brandon colours with a humorous explanation relating to a lady who insisted on being the subject matter. 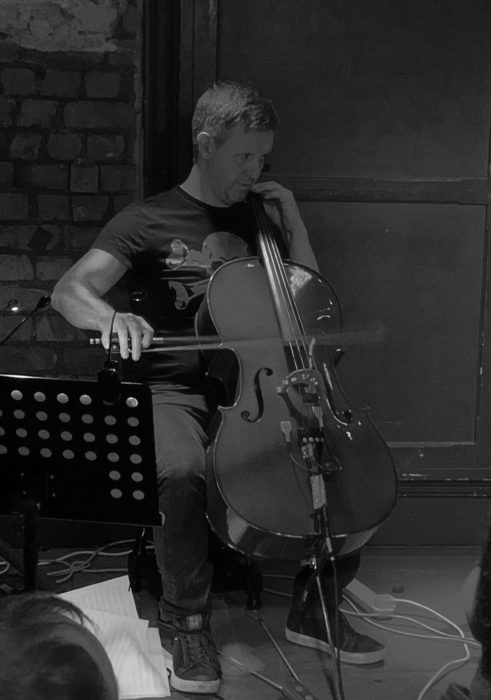 Watching Sansbury during ‘Love Is A Ghost’ and ‘At Her Majesty’s Request’ it is clear quite how much colour he brings to these shows, he has, I guess due to his background learnt each and every note, at times plucking strings, on occasion striking them, but also understanding the benefit of silence, during these moments Brandon’s legendary voice alone carries each piece, similarly Sansbury scratching at the strings cleverly creates simmering tension during ‘Last Man Standing’, and also offers subtle bass to support Brandon’s delivery ahead of a rather genteel fifteen minute break.

Brandon was as good as his word returning with the rarely heard ‘Iceman’ from the oft-overlooked Spear Of Destiny ‘Volunteers’ album from 2000, ahead of the more familiar ‘Playground Of Rich’ which was part of the recent ‘One Eyed Jacks’ anniversary tour.

Much of Brandon’s material, particularly the Spear Of Destiny catalogue is known for its grandiose panoramic sound, huge pieces like the anthemic ‘World Service’ for which Brandon abandons his guitar this really shouldn’t work when stripped down to just voice and cello, devoid of lighting embellishments; but work they do, and in triumphant style as Brandon leads the entire audience into a boisterous sing-a-long; the reason it works is due to the depth of Brandon’s songwriting. He has learnt his craft, he is still learning, as demonstrated by transporting us back to 1982 courtesy of The Pack’ ‘Brave New Soldiers’ which he introduces by suggesting Sansbury was “mad” to even suggest brining this into the ‘aKoustik’ arena. 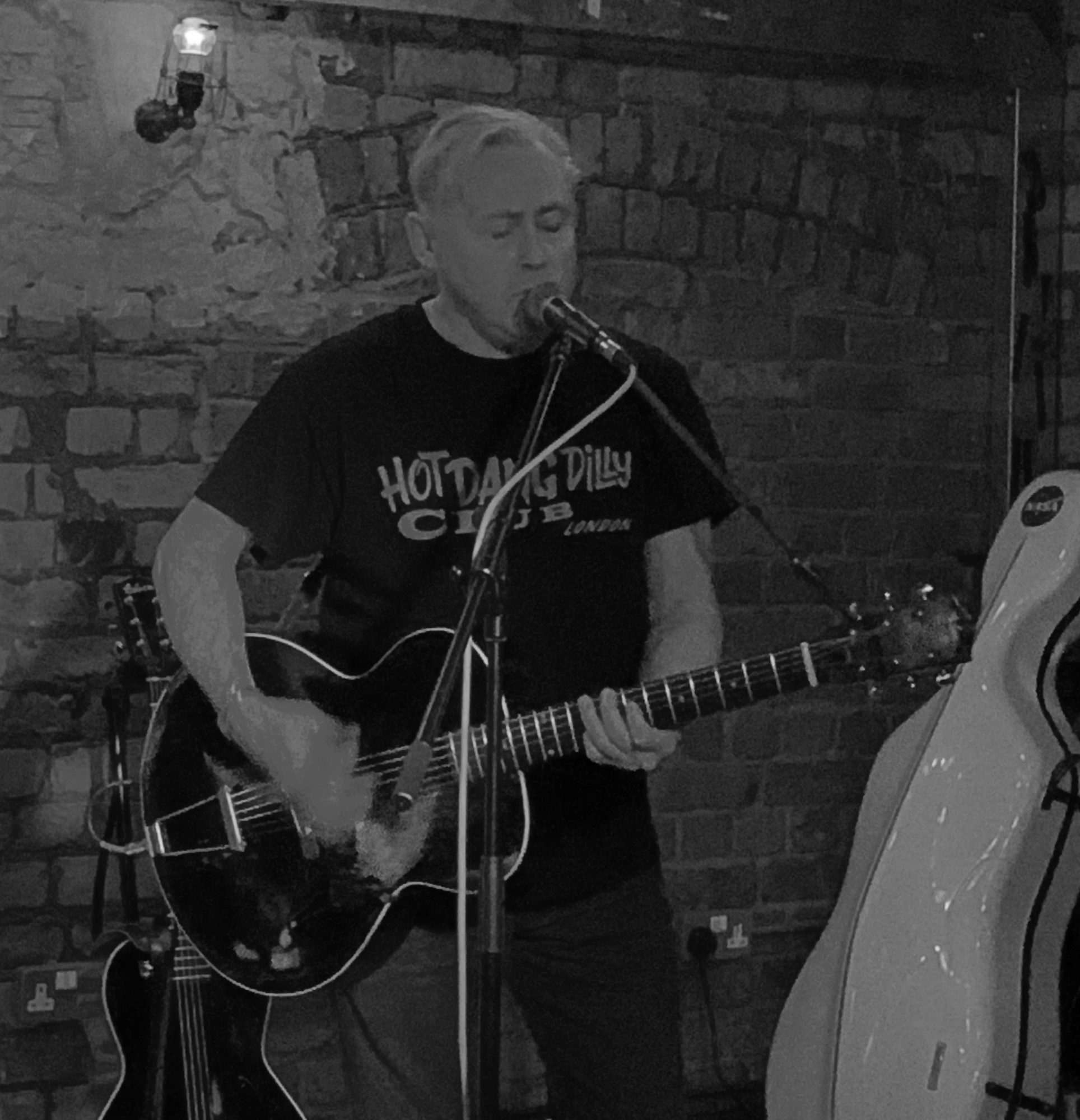 Think back to that early ‘Long Live The Past’ EP and his voice at times would veer and sway, not anymore, and with nothing to hide behind his delivery is pinpoint and compelling.

Closing with ‘Never Take Me Alive’ and then ’Westworld’ it was clear both Brandon and Sansbury enjoyed the performance, and from the rapturous applause it was abundantly clear the audience felt the same. Regardless of whichever point of Brandon’s career you favour, these aKoustiK shows have plenty to offer, the delivery whilst intimate, relaxed even, still has gravitas and the ability to shine new light on much of Brandon’s near 40yr catalogue.