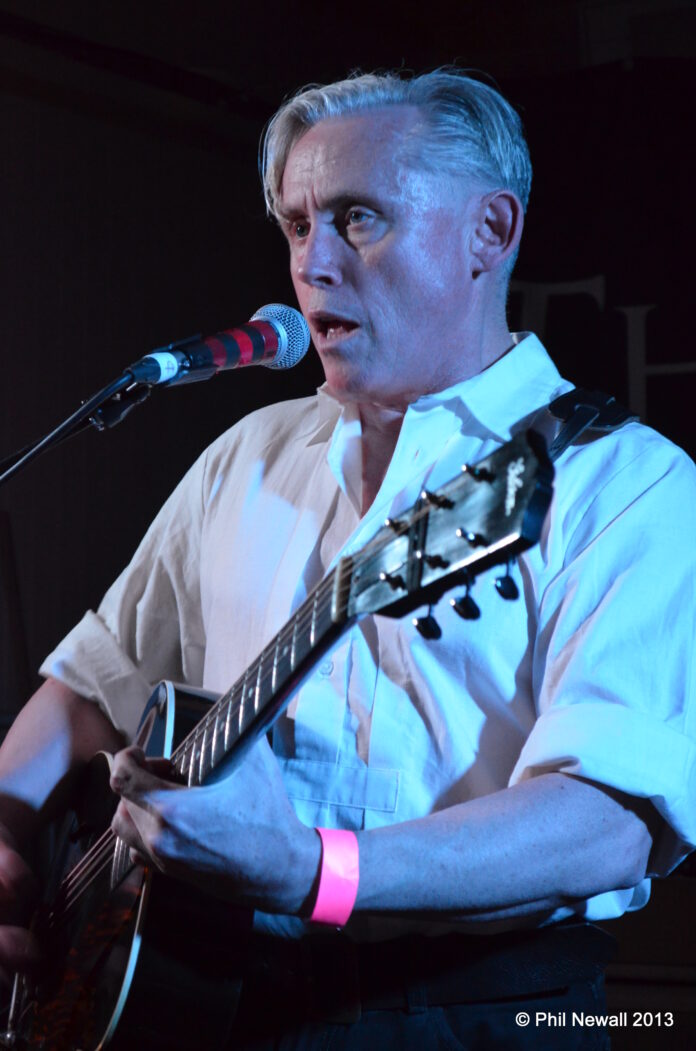 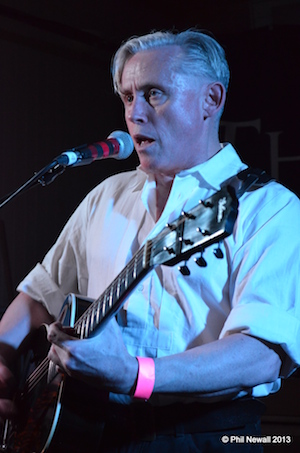 Kirk Brandon Akoustic (sic) – well that one caught my eye within the event listings, more so that the gig was taking place in Chester; not a city renowned for its live music, though back in September 77’ the Sex Pistols played at Quaintways, a venue that had previously hosted Thin Lizzy, and Parliament/Funkadelic; I recall seeing both Rapeman and The Damned there at some point…

Tonight though we were in the altogether more compact surroundings of The Compass, a well-known Chester watering hole that has tried many times to establish itself as a music venue – apparently it’s now under the control of the operators of Central Station (Wrexham) so things may start to look up. I was interested to comprehend quite how Brandon’s signature grandiose widescreen material ranging from The Pack, Theatre Of Hate and on to Spear Of Destiny would fare in such intimate surroundings; Brandon is revered for his distinctly powerful voice but also for fronting bands whose overall sound dwarfs stadium fillers like U2 – this could be the musical equivalent of ramming an Imax into your bog standard living room.

The layout of the venue is odd, three rooms knocked into one with the entrance and bar centrally positioned, the ‘stage’ at one end and the third area closed off to facilitate a merchandise area; When Brandon stepped out into the performance area he was greeted by an enthusiastic roar from the capacity crowd many wearing T-shirts chronologically mapping his career – he looks well for his 57yrs during which time he has swung between chart success, bankruptcy, health issues; tonight he looks the part, black jeans, engineer boots and a crisp white dress shirt and as ever that shock of coiffured blond hair.

Having greeted the audience in French he then leads us through a discography of material, opening with Spear Of Destiny’s ‘Young Men’ – he plays an acoustic guitar, subtly accompanied by backing tracks from the obligatory Apple laptop; before we travel further back, it’s hard to believe that ‘Original Sin’ was first released in November 1980, Brandon delivers it with the same intensity utilised all those years ago – in fact I would suggest that the minimal guitar forces you to focus on that voice, and that together with his measured delivery really is something to behold. Brandon looks relaxed, he switches between guitar, sips water between each song and regales us with anecdotes about his time on the road, we are treated to ‘World Service’ and then ‘Never Take Me Alive’ a #15 UK chart hit back in 1987 before Kirk introduces ‘Love On The Rhine’ a song he has only recently written – even in this stripped down delivery it retains all the Brandon hallmarks, its big, though not brash, brash that would suggest Brandon had lost the ability to craft a song and as we see as he leads us through ‘Aria’ and the mighty ‘Westworld’ we know that has never been the case; he describes touring in impoverished regions, struggling to come to terms with the injustice witnessed – his response? Well as he said in self-deprecating tones “I wrote a song about it” and led us through ‘Playground Of The Rich’ and onto ‘Falling In Love Again’ from his ‘Dutch Masters’ series of recordings, before revisiting Spear’s ‘Soldier Soldier’. 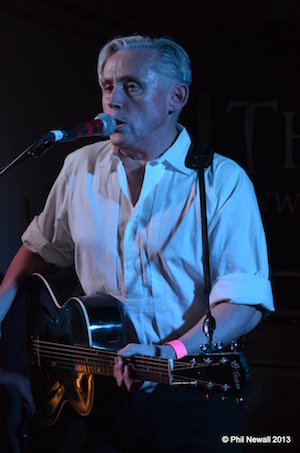 Brandon’s voice remains incredibly powerful, he has a huge vocal range and can effortlessly traverse from hushed whisper to bombastic rages; it is a travesty that his star does not shine brighter – for those present tonight though Brandon rightly remains one of the most vibrant and interesting artists to have come from the original UK punk scene; he chose to close with ‘Skyfall’ – yes, a cover of the Adele penned Bond theme which he delivered effortlessly without the overblown emotion of the original, taking the track to darker more sinister areas and was the better for it.

Quite simply a magnificent performance from a man who for many years has been critically overlooked – now is the time to address that.