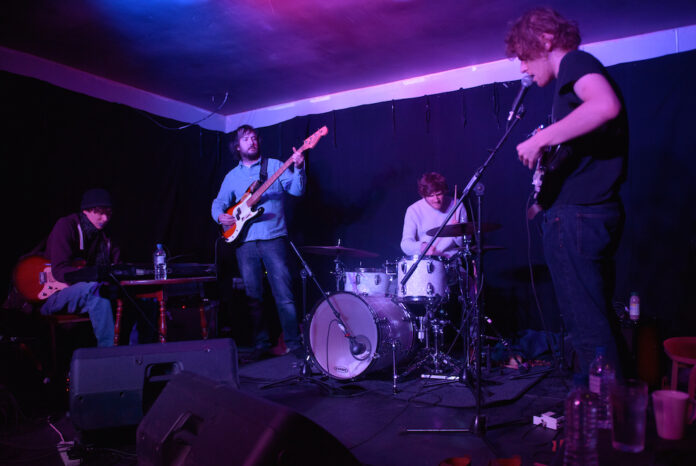 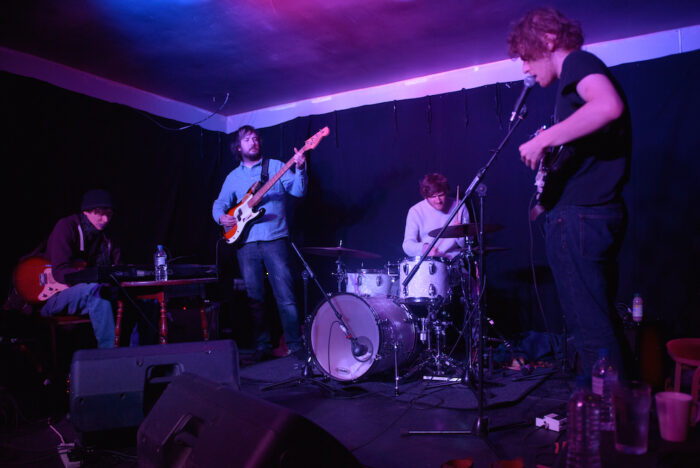 Kiran Leonard finally makes an appearance in Newcastle, he goes on to prove that it was well worth the wait. His erratic style sets this awesome little venue alight tonight, as he fires numerous new tracks at us including the almighty epic that is Grapefruit.

In the ’dead’ town of Newcastle, at the end of a balmy day this quaint room is filled with people who’ve awaited the arrival of tonight’s headline act for some eight months. However, there is a stellar supporting cast lined up first, unfortunately due to personal issues we missed the brilliant Euan Lynn. 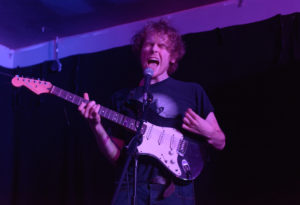 Having caught one of his previous sets, I can wholeheartedly recommend electric guitar driven; singer-songwriter jams are nothing short of brilliant. Fortunately though we’re there in time for our first dose of hotly tipped Teesside duo Mouses, they don’t fail to disappoint as their spiky garage punk tracks ring out throughout the venue.

It’s immediately apparent as to why there’s a buzz surrounding these guys, from a local scene point of view they’re the most interesting band around at the moment. It’ll not be long before this infectious duo is making waves throughout the rest of the country and beyond. By the time they leave the stage the whole crowd are well and truly hyped up, and as Kiran Leonard takes to the stage the crowds excitement is apparent.

Never to be one for convention Kiran opens his set with a monolithic track of prog influenced proportions, this track is the title track of his forthcoming record Grapefruit. It’s sixteen minutes of sheer brilliance; most people would consider it a risk to open with this, not Kiran this sprawling awe-inspiring track. He delivers this track with effortless ease, with his stall well and truly set its blatant we’re in for an incredible treat. 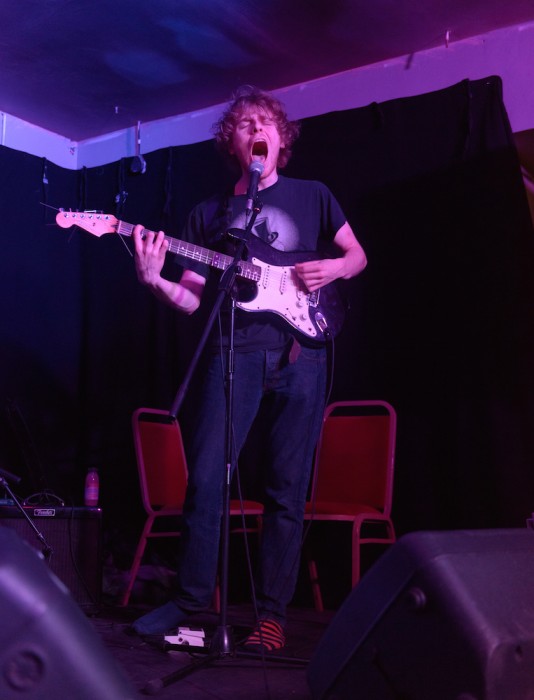 He doesn’t disappoint unfortunately there are no more prog rock epics, but it is a set that is packed with blasts of intensity, excitement and phenomenal guitar playing. Kiran exudes enthusiasm as the band power through, tracks like Oakland Highball despite its underlying sadness its an incredible two minute slice of spiky garage rock.

Kiran’s mannerisms and stage presence remind me of the incredible Jon Dwyer, there are also a variety of similarities with Thee Oh Sees these are particularly evident in Oakland Highball. However, Exeter Services is a definite highlight of this evening’s set, despite not being about Exeter Services (unfortunately) it is apparently about Buzzfeed. However, I doubt that to yet the track is one of the most intense of this evening, its sharpness and spiky guitars sound so exciting.

Not wanting to turn this into a slating of some of Newcastle’s music promoters, but Kiran does take time to mention last years cancelled show, which caused uproar on social media. He mentioned how the promoter touted Newcastle as a dead town, something that it definitely is not. Perhaps it doesn’t posses the bright lights and huge hipster population of other cities, but it has its own cliques of hardcore music fans.

This is evident in everything tonight, the brilliant venue that is The Cumberland Arms, a full crowd and the awesome promoters Prancey Dog. The latter have been putting on astounding gigs for a very long time, tonight being one of their best from my point of view. As the evening sadly draws to a close, the band leaves the stage, leaving Kiran to bestow upon us one solo track.

This evening could not have been any better, was it worth the eight-month wait? Of course and I’m sure I speak for everyone else here tonight in that we hope its not another eight months before Kiran pays us another visit.

Kiran Leonard can be found at his Bandcamp. He is also on Facebook and Tweets as @missythis.