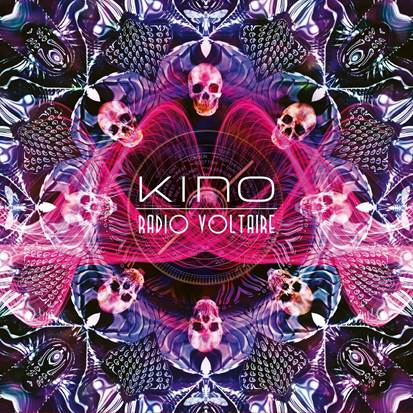 Bite down hard and do your la-di-da’s. 13 years on from their debut album Picture, Kino have returned with a new album, Radio Voltaire, featuring the talents of the core duo of John Mitchell (Lonely Robot, It Bites), and Pete Trewavas (Marillion) who are joined by drummer Craig Blundell (Steven Wilson) and special guest John Beck (It Bites).

One of those questions that John and Pete have likely been plagued with over the past decade. Heck, I seem to recall even asking myself when John was signing my copy of the first album at a house concert; probably resulting in a standard non-committal reply that it would be nice to do but of course everyone has their own schedules and commitments, blah-de-blah. However, out of the blue, all of a sudden, here we are.

Inevitably there are going to be comparisons to previous Mitchell outings as he does has a few fingers in a few pies, not only with Kino but from his tenure in It Bites, FROST* and his own Lonely Robot project.

Following pretty much the ‘if it ain’t broken why fix it’ mantra, we’re treated to some grand gestures in the form of fat slices of melodic-pop-rock songs and instrumental passages with hints of progressive leanings. Heralding their re-emergence with the title track, the bar is set ambitiously high. One that could easily have fitted the ‘big climax at the end of the album sequence’ slot packed with typical John Mitchell soaring lead lines amidst crescendo after crescendo that fans will draw comparison with the Gilmours and the Hacketts and the Rotherys of the rock guitar world. Followed by The Dead Club, the screaming synths and driving pace ensure that Radio Voltaire gets off to an impressive opening gambit.

Not an easy opening act to follow and to be fair, they don’t try, relying more on a range that shifts from slower paced atmospheres to bouncy and brightly harmonised pop love songs in the likes of I Don’t Know Why together with Out Of Time that channels a touch of blues-y R&B Traffic and a spacey Police section with sparse use of ringing guitar chords and some Copeland styled rim shots. It’s typical of the manner in which songs ebb and flow and suddenly catch your attention as they veer off track. The same sketch with Keep The Faith where the attention might drift but then gets pulled back as a seemingly mid tempo ballad suddenly takes a more interesting instrumental turn.

Temple Tudor takes the acoustic path and while it might be hard not to get caught up in thoughts of the swords of a thousand men, the relaxed mood created by the catchiest chorus on the record and the steel guitar ring fits the title and sets the mood perfectly. A departure from the general high tempo and although While I Won’t Break So Easily Anymore sounds ominously syrupy, it’s back to a driving and defiantly determined blast of melodic pop-rock (‘prock’ anyone?) whose background keyboard pattern is almost Townsend/Who-like in its sequenced patter.

Although the title track may have struck with an immediate high, The Silent Fighter Pilot closes out Radio Voltaire, recalling Mitchell and Beck’s work in a military direction on It Bites’ Map Of The Past and brings the album full circle, ending on the same sort of high that began an hour ago. Less of the bombast and punctuated by an eerie yet reflective ambience, it’s a shot of dynamics whose mid song silence emerges in a glowing sunburst and one final grandiose Mitchell solo.

The ambition of Radio Voltaire comes not in musical experimentation and progression but in the deconstruction of pop sensibilities. Reaching across and beyond boundaries, breaking them down and reconstructing the pieces into a hybrid that is the distinct Mitchell/Trewavas Kino.

You can hear the first single, The Dead Club from the album here:

You may struggle to find Kino online, but they have a page on the Inside Out website