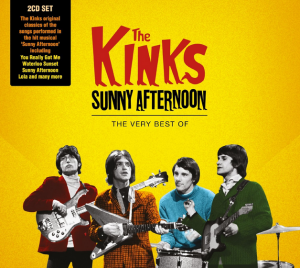 The Kinks: Sunny Afternoon – The Very Best Of

Out on October the 15th

Another Kinks compilation but one with a new twist and including some lesser known songs from their fantastic back catalogue. Louder Than War’s Craig Chaligne reviews.

The Kinks quietly disbanded in 1996 in general indifference from the media ,the new millennium saw the Davies brother’s music creeping up everywhere from Hewlett Packard adds to Wes Anderson movie soundtracks. Ray singing Waterloo Sunset in the opening ceremony of the 2012 Olympics and the musical “Sunny Afternoon” that has just finished its run at The Harold Pinter Theatre can be seen as the crowning achievements of that steady rise in popularity the band has recently been enjoying. Having witnessed the musical in its first run at The Hampstead Theatre, I found it was a very historically accurate tale of the groups beginnings (1964 till 1970) despite a few narrative short cuts for the purpose of making the story a bit more feelgood-y.

There has already been several Kinks greatest hits and box sets over the years but this one has a new angle, it revolves around the songs used in the musical and includes several interviews with the band that give you a feel of the swinging sixties. Of course most of the bands most famous songs were used in the musical but it’s the inclusion of lesser known numbers that really make a difference compared to the previous packages. The Kinks second single “You Still Want Me” opens the proceedings, the song was originally a flop, but the success of their third single (a little known ditty called “Your Really Got Me”) sealed their place in Rock’n’Roll history. If you are familiar with The Kinks history (and to a certain extent with every sixties bands history), you’ll know that the band was badly ripped off by their management and publishers,  “Denmark Street” from 1970’s “Lola Vs Powerman and The Moneygoround Pt1” recounts this in a very humorous and tuneful manner. The first disc contains so many classic songs, from the bands take on a folk song with “Well Respected Man”, the kitchen-sink drama of “Dead End Street”  or the rousing proto-punk rave-up of “All Day And All Of The Night”. As said earlier in the review this compilation rehabilitates some lost gems of the Kinks catalogue. The excellent “This Time Tomorrow” and the heart wrenching ballad “Sitting In My Hotel” (from the underrated “Everybody’s In Showbiz” album) are the two best examples on Disc 1.

The second disc opens with the title track of the compilation and its immortal descending piano lick. The band turned the opening hook in a song to an art form as many of their songs can be recognized with the first note (“Sunny Afternoon”, “You Really Got Me”, “Waterloo Sunset”, “Lola”). The only post 1972 song included in the compilation is “Rock’n’Roll Fantasy”, a good song but it sits a bit uncomfortably between two greats tracks (“Sunny Afternoon” and “Days”).  The bands “Arthur” album gets represented by two of its best tracks, the country rocker “Victoria” and the the brass driven “Brainwashed”, another great “alienated” song of Ray Davies.