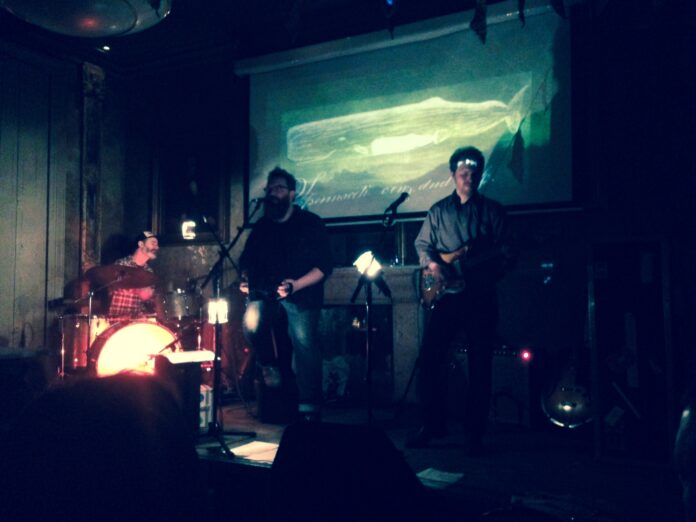 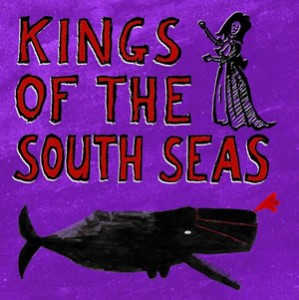 In the 19th century, sperm whale oil was a vital commodity, fuelling factories and keeping lamps burning across Britain. For more than 50 years, ships set out from London bound for prime whaling grounds in the south Pacific, chasing those beautiful, square-headed creatures, a single one of which could yield up to 2,000 tonnes of oil.

Ben Nicholls’ Kings of the South Seas project explored the songs created by the people who took those voyages, shining a light on their fears, pleasures and prejudices. Released at the end of last year, Nicholls and his group, along with producer John Parish, created dark and brooding musical settings for these shanties, ballads and hymns. The resulting album was contemporary and ancient at the same time, with fuzzed out guitar and surging drums – courtesy of Richard Warren and Evan Jenkins – providing a tumultuous backdrop for the Nicholls’ meaty baritone vocals and austere concertina drones.

The band – also called Kings of the South Seas –  are just about to head out with folk behemoths Bellowhead on a UK-wide tour and this show, in the cosy Old Queens Head in north London serves as something as a warm up.

They’re assisted tonight by fellow travellers C Joynes and the Dead Rat Orchestra, with whom they share a vision of folk music freed from its heritage music shackles. Joynes and the Rats give a sterling account of their current mongrel-global-folk grooves, though they’re a member down as violinist Daniel Merrill is off on his own musical voyage in Egypt.

They’re the perfect appetizer for the avuncular presence of Nicholls and crew, who take up position soon after, spread across the stage in a three-man attacking formation. Playing in front of a suitably cetacean backdrop, with storm lanterns illuminating the tiny stage, they waste no time casting out into the heavy seas, the heavy, ominous drones of The Coast of Peru leaving us in no doubt that life on a whaling ship was anything but a pleasure cruise.

Live, the songs are more forceful and ominous than on record, with the band sounding even more like an offshoot of the 90’s incarnation of The Bad Seeds (Let Love In is an obvious reference point). Richard Warren’s guitar is cobwebbed and brittle, sending wiry, tremolo-bent bursts of sound deep into the vortex of the songs, like the harpoons that pierce the blubber of those whales unfortunate enough to be captured by the desperate seafarers.

Nicholls is an avuncular guide through this doom and gloom. Perched on a stool between his two compadres, concertina at his hip, between songs he adds background and context, as well as reflecting on how the project evolved. He keeps it light, however, so the result is less like a lecture and more like chatting to a well-informed bloke at the bar of nice old pub.

This is a good thing, because his stories aren’t exactly full of joy and fun. Introducing Weary Whaling Grounds, he describes how dead whales were strapped to the side of the ship and stripped of their blubber while still in the sea. The blubber was then boiled down on deck, in vast cauldrons, to get the oil. Blood and gore was everywhere. “Sailors often said it was like being in hell,” he says.

There are lighter moments. King of the Cannibal Islands is positively jaunty, helped by  drummer Jenkins performing a sprightly military tattoo on his woodblocks. Jenkins’ day job is keeping time with Neil Cowley’s jazz trio, and his subtle and varied playing keeps things from getting too ponderous.

One more song – a heartfelt rendition of the old hymn I’m On My Journey Home – and they’re off. Yet the images conjured up by these old songs, rendered in stark relief by the trio’s stark and baleful music, seem to hang in the air long after they have left the stage, reminding us of the harshness of the sailor’s life on those whaling ships and the terrible carnage they inflicted.

Details of Kings of the South Seas’ tour are here and you can check out the album and the stories behind it here, on this YouTube channel, onFacebook  or on Twitter.