Home Blogs Kings Of The Wild Frontier – a celebration and more news about... 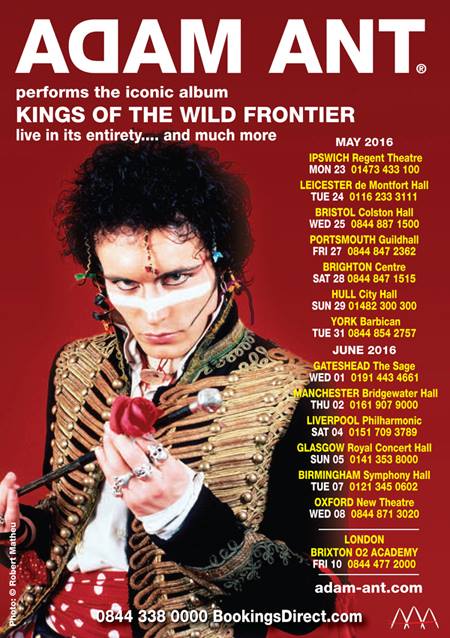 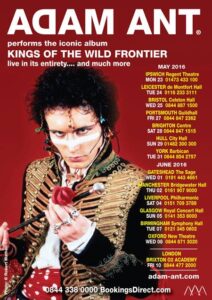 KINGS OF THE WILD FRONTIER

Adam Ant has finally announced the tour dates playing one of the most iconic albums of the 1980’s. Earlier this year he sent the fans in a spin with his successful ‘Dirk Wears White Sox’ tour. The announcement of this tour is surely going to cause palpitations through lots of middle-aged Ant fans hearts! The tour kicks off in May 2016 in Ipswich and culminating in London on the 10th of June. It’s pretty much safe to say that this tour will sell out and more dates will be added. There are rumours of a dvd now rife to coincide with the tour as the British Board Of Film Classification have just given a ninety two minute film a certificate 12 certificate with intended release date for 5th February 2016. This could quite possibly see ‘Ants In Japan’ get it’s first digital release with other unreleased gems too. It’s all about to get very exciting in the Ant world.

Thirty-five years ago the number one platinum selling post punk new wave album ‘Kings Of The Wild Frontier’ first entered the public’s consciousness in the November 1980. The month before on Thursday October 16th if you were watching UK television at 7.30pm you had a one in three chance of witnessing the impact on the British public TV debut performance of Adam And The Ants with ‘Dog Eat Dog’. It literally spawned a monster that rapidly gained momentum. By the end of January 1981 the Ants had crawled their way to the top of the UK album chart. The week previous to reaching pole position Adam And The Ants had no less than five singles in top 75 as Ant mania swept like a fire across the land much akin to the days of Beatle mania in the 60s and T.Rex mania of the 70’s. The early 80s decade had found it’s first heroes with exuberance and almighty swagger and Adam’s face adorned many a magazine in every newsagent, there was no hiding place when the ‘Ants Invasion’ was in full swing!

In 1979 the late Malcolm McLaren had stole Adam’s original ants for his Bow Wow Wow project. Adam merely shook off the upsetting momentary glitch with the upmost of sheer will and determination to ascertain his validity in the music business by forming a new band and instead of just being another new wave post punk band, Adam Ant created a winning formula, that would blow his ex-Ant rivals Bow Wow Wow completely out of the water. The formula consisted of a totally new identity, a new genre of music cleverly advertising its agenda in the lyrics and made the fans feel like they belong to their tribe. Ant people were the warriors and Ant Music was indeed their banner. He wove an image together from the buccaneers, Native American Indians and the Charge of the Light Brigade. Ant music was a euphony, a mixture of elements, the odd glitter beat of glam rock, spaghetti western soundtrack twang guitars, rockabilly, surf rock, sea shanty, African tribal chants and rhythms that do not sound pleasurable on paper, yet the reality is a completely different story on the ears. They were Ant warriors selling Ant music For Sex People. Adam wanted to live out his own fantasy not live out McLaren’s vicarious pleasures. The formula propelled Adam and his Ants into super overdrive, let’s face it, even with the previous decade’s glam and glitter of David Bowie and Marc Bolan, nothing had ever looked like this and more importantly nothing had ever sounded like this, hence the reasons that ‘Kings Of The Wild Frontier’ appears in many lists of albums to listen to before you die and the reason why thirty five years later Adam Ant is still etched in the memory of millions of people who adored him and made Adam Ant one of the biggest pop icons.

This tour gives the fans a chance to relive their carefree youth and the opportunity for new fans to get a glimpse of a time when music and image were equally as important as one another.
This is one not to miss….. ‘Don’t Be Square Be There!’
(well how else do you end an article relating to Kings Of The Wild Frontier?)