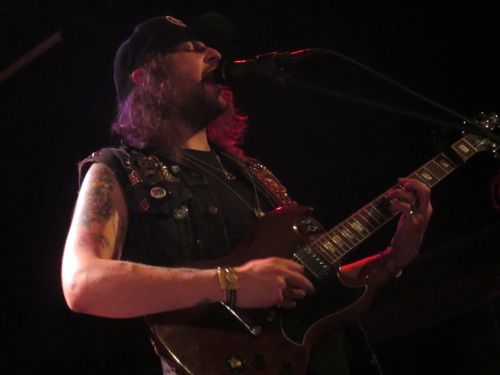 A lot of the time I like my music played by larger than life characters; characters that seemingly corporealized out of the uncurling mists of a sorcerer’s spell or accidentally beamed down from a beautiful alien starship to live among us. Southern Vermont native Kyle Thomas (AKA King Tuff), with his gold-toothed grin, customized denim and omnipresent trucker hat worn over his scraggly long hair, certainly lives up to this role. The previous night’s show in Brooklyn was full of crowd collisions and a drunken female stage diver overstaying her welcome with an extended lumbering dance routine, so I hoped The Bowery Ballroom would offer less bruising on my already tenderized legs and more of a chance to soak in the songs.

The first band to open for King Tuff was the relatively new Brooklyn quartet Roya, which features Rahil Jamalifard of Habibi on vocals and the legendary Hamish Kilgour of The Clean on drums. Roya does not stray far from the less-is-more minimalism of Habibi, and a cover of 14th Floor, the DIY 1978 first single by Television Personalities, also hints at their preference for simple yet highly effective song styles.

Next up was a solo acoustic set from Cassie Ramone of Vivian Girls and The Babies. She encourages everyone to sit down on the floor like some hippie-ish cult of new age healing crystal collectors and at first it feels a little awkward; I was having embarrassing flashbacks of school assembly halls and story time at summer camp, but hey, at least I didn’t have to hold hands with anyone, and once everyone does it, you sort of get over it. Watching Cassie Ramone alone on a stage is almost uncomfortably intimate; her feet twist spasmodically in their scuffed, white Converse high tops as if the songs are being physically wrenched from her soul. Ramone’s airy, bleating alto is mostly spare and somber but takes on a naked, tremulous lilt as the dark heart of her lovesick yearnings steadily builds power and takes hold. There is a troubled resentment and a deep, searing pain that simmers just beneath the boil on the ragged drones of The Time Has Come and Joe’s Song, and towards the end I threw a few cutting glances in the direction of whoever I heard talking at the back.

Soon it’s time for King Tuff, and cheers ripple throughout the room as he and his mustachioed superpals Magic Jake and Old Gary take their places against the flaming x-ray eye skull stage banner. Bassist Magic Jake has toned his shirt down from the permanent vacation vibes of the palm tree print he wore in Brooklyn, but his cheerful spirit remains intact. “Who was at the show last night?” he asks with a smile, and I give him a sly nod. Prior to joining King Tuff’s band, Magic Jake jammed out with his own Magic Jake & The Power Crystals, and Old Gary played with the thuggish, brass-knuckle packing pizza-themed Personal and The Pizzas.

King Tuff starts things off with the distorted monster riffs of the new album’s cocksure title track Black Moon Spell, and Tuffy’s nasally whine pretty openly announces the futility of even attempting to resist his benevolent rock ‘n’ roll voodooism’s potent charms (“You feel a sickness in your heart/’cause you drank my witches brew/you were doomed right from the start/and you know I feel it too”). They hurtle straight into the bubbleheaded youthful abandon of Wild Desire from Suicide Squeeze’s 2012 7” single series, and then onto Madness; King Tuff’s personal mission statement for everyone to unchain their brains and unleash their inner freak. 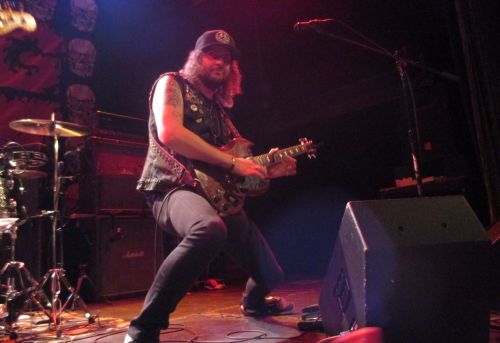 Throughout the set, only a handful of his most beloved older songs are revisited (Freak When I’m Dead, Sun Medallion, Bad Thing, Anthem), but this is no disappointment considering the mighty strengths of Black Moon Spell. These new songs are filled with fist pumping choruses, commandingly jovial drum stomps and wailing lead guitar spotlights that evoke the best of cliché-ridden hard rock with no use for any of the genre’s usual gimmickry. In other words, King Tuff has made arena rock fucking cool again.

Black Moon Spell highlight Headbanger is a life-affirming buzz for those aimless oddballs who have been given a sense of purpose and a place of belonging through music, and the shiny ballad Staircase of Diamonds changes up the pace but continues this rock ‘n’ roll love letter by channeling Marc Bolan. Somewhere inbetween songs, King Tuff’s hardworking merch witch, complete with black pointy hat and green face paint, joins the stage to sling some t-shirts and goodies out into the crowd (unfortunately I don’t catch any of it, but what can you do?).

King Tuff does not see the point in staggering an encore with the whole going away and coming back charade, so not long after the blissed-out romp of Anthem, we’re treated to the whimsical strums of I Love You Ugly (an affectionate catalog of hideousness which sounds like it could be a Nobunny outtake). Finally, the band leaves us with Alone and Stoned, but no one present in this room can possibly feel alone right now…The denim-clad Tuffy, properly flared with pins and patches and pyramid studs, stands in the pose passed down through generations of kick-ass weirdos who have ever graced a stage with their otherworldly greatness; the classic split leg rock stance. He tilts his head back and closes his eyes, enraptured by the noises coming out of his silver Vox Phantom guitar. And at that moment, he is a true vision of rock ‘n’ roll magic made incarnate in fabulous living flesh. 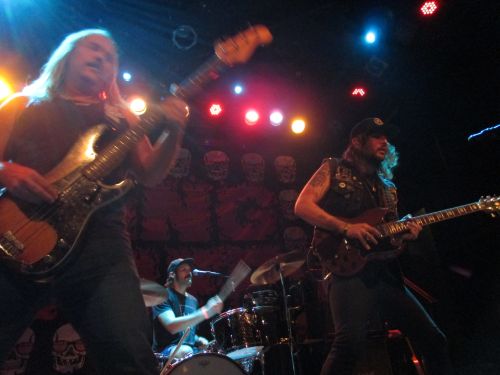 King Tuff is on Facebook and Twitter. Make sure to catch him on his remaining US tour dates or during his upcoming visit to the UK and Europe next month!