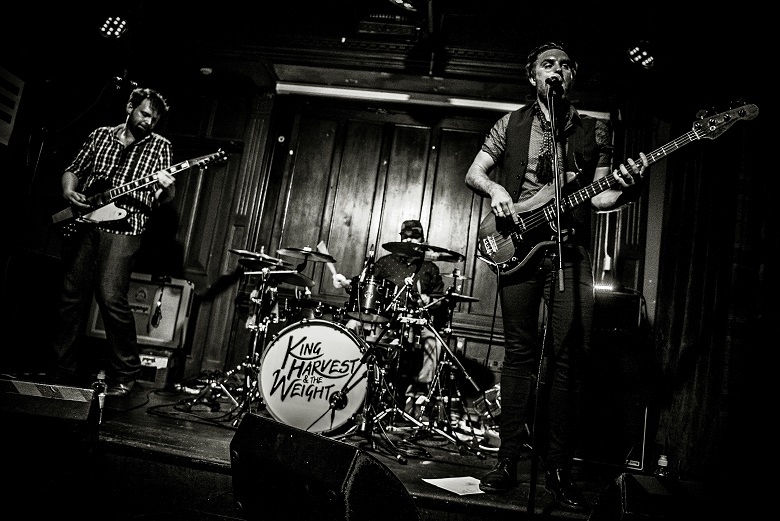 King Harvest And The Weight

A day ahead  of the release of their debut  album (LTW review here ) and following the successful launch gig a couple of nights before, the Ben Adey project known collectively as King Harvest And The Weight hit one of the hotspots on the Manchester circuit to share  the album to a live setting. Quite a transformation it was too.

Possibly  the pressure was off having launched the album at the famous  Hebden Bridge Trades Club, but every gig of course is an opportunity to impress and attract  out a  crowd whose word of mouth can  spread the message.  A few bucket hats might have been  in evidence down on Oldham Street with The Stone Roses at the last of their mega gigs just out of town; either that or it was just a concession to some last minute cheap headgear to stave  off the drizzle. Anyone with a modicum of taste may have been best served not squashed into the Etihad but  in the famous intimate  back room at The Castle –  the perfect setting  for some sweaty loud rock and roll. King Harvest Ben’s nod to stage gear, a smart little neck tie, not lasting too long in the heat radiating from stage.

Anyone familiar with the pre-release outings of material from  ‘maps’ might have expected a reasonably sedate evening, but in the live arena, KH&TW are aren’t so much a different band but without question a different proposition to what you hear on record. ‘maps’ is just the beginning. The  players who make up The Weight on the album gets filtered  down a trio.  Of course Ben Adey is King Harvest himself, songwriter and main force, joined by two of the numerous players on the album  in Olly Smith on guitar and Justin Edley on drums to form a well drilled tight outfit. They literally  yanked  the songs from the album, smeared the song book in the dirt  and injected them with some serious volume and attitude. 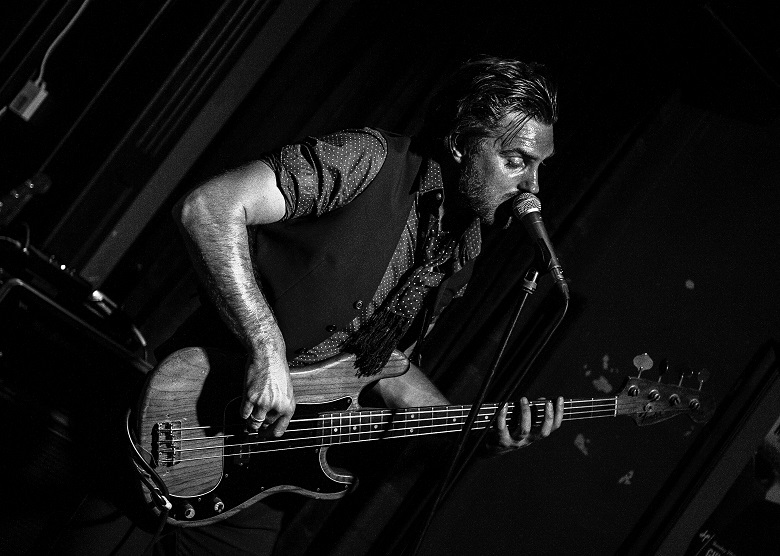 The more poppy ‘Diana’ and the low key ‘New York Is Dangerous’ took on a new coat of raw hard rock to sit comfortably alongside the more out and out rock songs from the album.  ‘This Town’  paired with the  the new ‘Snakes And Ladders’ might ultimately give an idea of the direction the band will take next. There’s no time being wasted in talk of the  next release being on the schedule for the end of  October and if ‘Snakes And Ladders’  is a taster, then those who might draw comparisons with a happening band like Rival Sons (not just in the visual department too with Olly Smith brandishing a classic Gibson Thunderbird, preferred axe of the aforementioned  Sons) might not be far from the mark.  Stripped back and stripped down to a basic power trio,  KH&TW look like they have the potential to  be worthy of the ‘ones to watch’ label.

Words and live photography by Mike Ainscoe. You can find more of Mike’s work on Louder Than War at his author’s archive and his website is www.michaelainscoephotography.co.uk