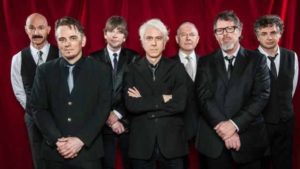 Of all the unpredictable things about King Crimson’s latest reunion, perhaps the most unexpected of all has been the clear evidence of Robert Fripp – the stern, headmasterly keeper of Crimson’s jazz-rock-improv flame – showing clear signs of enjoying himself. Since resolving his long-standing contract dispute with his record label he has not only appeared looking cheerful and relaxed on All-Star Mr and Mrs, but then reactivated King Crimson in a three drummer formation which for the first time is playing predominantly older material, and furthermore seems to be having a fine old lark as he does so. What next? The new face of the Waitrose ad campaign? A Twitter account?

So anyway, here we are again, the stage strewn with drumkits of varying widths and complexities, numerous guitars, basses and wind instruments propped up on their stands on a stage to the rear. It looks like the undiscovered tomb of a particularly musically ambitious pharaoh.

Over the tannoy come the measured West Country tones of Fripp. In the manner of an avuncular neighbour returning a football to some children and asking them to play elsewhere, he politely entreats the audience not to film or photograph the concert. The recorded voices of the other band members – sounding perhaps somewhat obliged to contribute to this whole procedure – dutifully follow, then the lights dim and on they walk, seven-strong, smart-suited to a man, a fearsome array of talent. Ladies and gentlemen, King Crimson Mk8: Guitarist / vocalist Jakko Jakszyk, his guitar decorated with the famous face of Crimson’s first album; bassist Tony Levin, a Peter Gabriel stalwart and Crimson recruit since the ‘80s; returning sax / flautist Mel Collins, a prog veteran with a CV including Camel and Roger Waters; the drum trio of Pat Mastelotto, a Crimson veteran of 20 years; the fiendishly talented Gavin Harrison; and former Ministry / REM man Bill Rieflin, also entrusted with the crucial mellotron role.

A flurry of tuned percussion and swirl of cymbals suddenly lurches into the revered Lark’s Tongue’s In Aspic, and it becomes more clear how the jumble of instrumentation will function, with waves of synchronised percussion rattling across the three kits like the legs of a millipede, Fripp and Jakszyk alternating squalls of noise, each holding back when Collins lobs in a sax solo, and Levin coaxing a menagerie of low-end noise from his various basses.

If this weren’t statement enough, next up is the apocalyptic jazz-swing of Pictures of a City from 1970’s In The Wake of Poseidon (Collins’ original entry point to the band), previously as likely to be in a Crimson set as a Kanye West covers medley.

From there it’s on to a brand new song, the instrumental Meltdown, in which the three drummers fire up like pistons in a steampunk supertanker. There are times in the set, it must be said, when the work of a single Michael Giles or Bill Bruford would be more effective – but the drum trio is no mere novelty and wins its place on merit.

Level Five (from the otherwise under-represented Adrian Belew era) features spider-fingered interplay between Fripp and Levin, and a rare outing for 1971’s The Letters gives Jakszyk a vocal star-turn before Sailor’s Tale allows Fripp to unleash one of his best solos. For all manner of reasons it’s breath-taking stuff, crowned with a majestic closer of Starless from 1974’s classic Red album, latterly covered by The Unthanks and here given a close to definitive rendering – or it would be, had Levin ramped up his bass levels to the juggernaut volume of John Wetton’s original performance.

And finally, an encore…and a proper encore at that, in which the band play two genuinely epochal songs, In The Court of The Crimson King and 21st Century Schizoid Man, each from the 1969 debut album but the latter in particular sounding full of contemporary menace and vim.

It’s a suitably amazing end to an evening which has thrilled and challenged in the manner only King Crimson can. Next time, who knows? Perhaps Fripp will strip things back down and return with just himself and two accordionists. We trust his gift and his unpredictability.