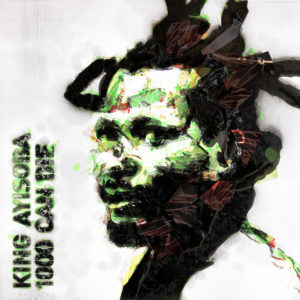 King Ayisoba may not be a household name in the UK but in his homeland of Ghana he almost is. On his debut album for Glitterbeat he enlists the help of the likes of Lee ‘Scratch’ Perry and has been produced by Arnold de Boer of The EX, the legendary Dutch post-punk band.

It’s an album that is hard to label. Opening track Africa Needs Africa is an angry, energetic track which steamrolls the album into being from the opening bars. There is shouting (and probably profanity) and an undeniable lineage to traditional music which is given a completely modern overhaul to create one of those tracks which is difficult not to hum afterwards. A heavy bass and frenetic percussion accompany King Ayisoba’s playing of the kologo, a traditional lute, with added rap from guests Wantov da Kubolor and Big Gad. Wekana continues the feel and sound and kicks the album of to a tremendous start.

On the title track, Perry appears. His unmistakable voice making an charge well into the track around the three minute mark, but it is wondrous as the backing begins to reverb around him which also features Ghanaian rapper M3nsa. To compare to anyone else would maybe be unfair but imagine Tricky meets Keith LeBlanc meets Fela Kuti and it will give you some idea of what to expect.

Repetitive rhythms blend with infectious beats and voices, and the several guest appearances add depth and variance to the proceedings. It’s an album which doesn’t tire, particularly on tracks like Dapagara (featuring Nigerian saxophonist Orlando Julius) and Wine Lange which are raw to say the least. The later has looped or repeated melodies which bring about an almost mystical quality.

Anka Yen Tu Kwai again brings forward an eclectic range of sounds and melodies in a cacophony of noise which somehow just falls into place. Once more, given that the vocals are foreign tongue to most of us, the chorus and verses are incredibly infectious.

It’s a varied and unusual album and one which marks a turn in the career of King Ayisoba blending traditional with modern and even hints of the future.