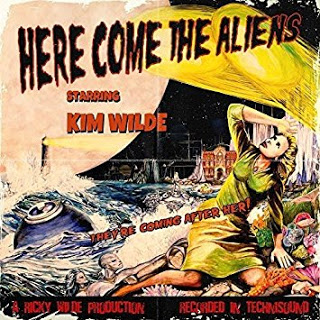 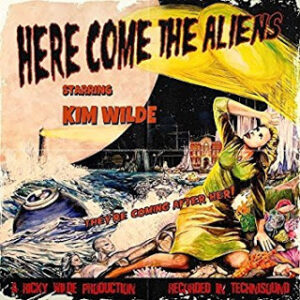 It’s nice to hear an album opening with a sample of an older track, almost through some busted old speakers and especially when it’s Kim Wilde. Not only that ‘1969’ has a Super Mario sample in it underneath the pumping rock guitars and thumping Adam Ant drums. Kim singing ‘Here come the aliens’ reminds us to stay barricaded indoors with her new album for company.

‘Pop Don’t Stop’ has a super-pop feel to it and could be forgiven for being lifted from a 80’s Romantic Comedy starring Patrick Swayze that was never made. It doesn’t sound current at all and that’s quite charming with all its glittery synths and U2 bass lines. It’s a stark contrast to the driving rock beats of ‘Kandy Krush’ which has all the ingredients for an anthemic, end-of-the-night celebration of fists in the air after listening to Foreigner. Either that or the ending credits to a Japanese Anime.

‘Stereo Shot’ is a real Blondie moment and has some flashes of Genesis in places too, flanging guitars and synths and rock n roll delayed vocal effects. ‘Yours ‘Til The End’ presents us with a fretless bass. It’s a hard sound to and feels rooted firmly in the 80’s but it does work on this track. It doesn’t feel modern and the production is very heavy with lots of reverb and effects all over the place. It would have been nice to hear something a little more stripped back on this track.

‘Solstice’ opens beautifully with Kim Wilde’s vocals and sounds like a cross between Bjork, Madonna and Marc Almond somehow. It’s a well placed track after ‘Yours ‘Til The End’ and has a much more minimal approach to the production, giving Kim’s voice an opportunity to shine. It has quite a musical theatre feel to it and wouldn’t go amiss in The Greatest Showman soundtrack. Definitely a highlight of the album.

‘Addicted To You’ smacks us right back into a driving, synth-fuelled goth tune that sounds like a cross between 90’s britpopsters Garbage and Republica and ‘Birthday’ is a birthday sing-a-long. In short this an album which feels locked into the 80’s and tries hard to feel modern. It will please Kim Wilde fans no end, especially with it being a brand new album but it could have been so much more without the big production values. It makes it sound dated and that’s a shame because it may prevent it from appealing to a younger generation of up and coming music fans.