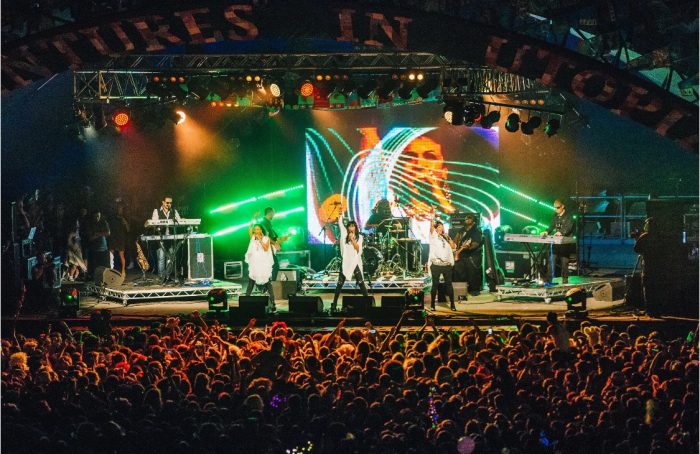 Sister Sledge is about to embark on a massive tour, embracing the 40th anniversary of disco. It will take them to three continents, beginning in Australia, middling in the Netherlands, followed by the U.K. There’ll be a New Year’s Eve extravaganza in Atlantic City and then they’re back to the U.K. again. Artists also included will be, Tavares, Rose Royce, Boney M, The Real Thing, Odyssey and George McCrae.

With clubs like Studio 54, disco became popular in the early 70s and exploded in 1977 with the Disco Fever album, and Saturday Night Fever in 1978. Anthems such as We Are Family by Sister Sledge and YMCA by the Village People have lasted through the decades, and are still played at every party throughout the world.

Vocal group, Sister Sledge originally consisted of sisters Kim, Kathy, Debbie and Joni Sledge. Symbolizing radical family ties and values, the faction celebrated US and international success at the height of the disco era with their album and single, We Are Family, which earned a Grammy nomination. The group also performed for Pope Francis in 2015 at the World Festival of Families in Philadelphia, where they are originally from. After Kathy left the group, Sister Sledge remained a trio, until the death of sister Joni in 2017. Kim and Debbie remain still strong and ready to tour.

I had the pleasure of speaking with Kim Sledge while on her way driving to New York City to visit her sick Aunt in the hospital, and picking up sister Carol on the way, proving that family ties are still held in high esteem. Despite her present anxiety over her Aunt, Kim was warm and friendly, with a very special spirit that you couldn’t help but fall in love with.

LTW: Aside from your upcoming Australian and U.K. Tour, you will be celebrating New Year’s Eve at The Tropicana in Atlantic City?

Your song, We Are Family became one of the biggest anthems ever. What was it like for you the first time you heard it on the radio? Do you recall that feeling you had?

I absolutely do! I remember the day. It was surreal. We were so excited because we looked at this little radio and heard our voice coming out of it. It was like, ” Oh my gosh,” it was just so exciting; I remember it to this day.

Your song was adopted by the LBGT community. It’s played at every party, wedding, set 16, musical gatherings, community events…

You know, when I really think about that I am so… I can’t even describe the words. I am beyond grateful. The gratitude and the privilege and the honor… seriously, I’m not just saying it… like we were chosen to do that song. I’m a believer and I really believe that things don’t just happen. I think that there is a God and I really believe it. For him to have given us that song to sing, I’m just so eternally grateful for that. I’ve seen what it does to people. I’ve seen what it does to families and groups.

Well if you believe that music can influence the world, that would be the song to do it.

I believe that. Music is a uniting, healing force. It brings everybody together. That’s actually what disco did too. When we started singing it was just music. Even when we went through the disco era, it was still just music. Because music, I don’t care what category you put it in, good music is going to heal the soul. It’s going to bring folks together. It’s going to make you happy, it takes you to another place, and that’s what it should do. You want to be transformed for a minute, and just say, “We’re ok, and we’re really ok together.” Let’s drop all of our differences and embrace each other through music. That’s what it’s really about, we’re a family.

How old were you when you found that you could sing?

Our grandmother used to walk up to the keyboard. She had one of those old wooden pianos. She would bring us up to the piano and say “perform”. We were three, four, five and seven, and she would teach us breathing skills, and tell us it was an instrument, show us the different levels and areas of the vocal chords, tell us we’d have to use it properly through the chest. She said also, “I want you to be able to sing acapella. If everything else fails, then hit a tune. It’s your instrument.” But it was fun. She made it fun. She was a real jokester. It was a discipline, but we loved to sing. So for us it, was a form of recreation. We just did it. So it went way back, way back.

Singing with your sisters all these years, did that ever become a challenge in terms of getting along together?

We got along exactly as sisters get along, but I think we were a little closer. We were each other’s playmates, confidantes, because when you’re coming up in that environment you are each other’s recreation. We were sheltered from a lot of things when we were little and when we were on the road. We didn’t know anything. We had everyone with us, our uncle, our aunt, grandmother; we were literally a family on the road. We were each other’s sort of peer group. Not that we didn’t all go to school and everything. I remember when I was in high school, I was really into team sports, but we had rehearsal. So I would get in trouble every day because I would just go to basketball practice, volleyball practice or I used to run too. We had a normal life, which was a little crazy. You might be in Japan, seriously, that weekend, but on Monday you were in class. It was the real deal, it really was. But why would you share details like that because nobody believed you. It was fun, we had fun, and I tried to savour every bit of being a normal high school or junior high school student.

It seems that you still have a very close family. (Just then sister Carol jumped in the car).

Nice to meet you Carol.

Carol: Nice to meet you too.

How many are there of you?

Kim: There are five sisters and of course Joni is in heaven. Carol would come in and out every time we needed her, like when there was a pregnancy or something. Actually Carol was the one that really started us. I mean it was my grandmother and everything, but when you talk about singing in the business, we were her back-up singers. She would be in the mirror and we were all lined up. She was the lead singer and she was singing her little songs, and we would be her back-up singers.

If you could say anything to your fans, what would it be?

I would say, be encouraged. That’s the first thing that came to mind – be encouraged. We all have our different faiths, and my faith, I’m not impressing any faith on anyone, but I’m just saying for my own, I know that I see miracles. I’ve seen God do amazing things.

I saw your testimonial video.

Ok, cool, and I really believe that with faith you can move mountains, and I really believe that you should never give up. Our mom would always say, “Finish the work.” Finish what you start; stick with it. I was watching this speaker on television. He was talking about not procrastinating. There’s a lot of things that I want to do, all kinds of different projects and things, but I’ll put them down and say, “I’ll get to it.” But here’s the thing; after I was listening that night, I got up, I lifted up all the things I was working on. You know you have that closet that you want to clean out? Or you promise yourself you are going to try something, like take a tennis class, but you never get to it. Well do it. Just do it, because you don’t know what’s going to happen the next day, and an opportunity might open up from that thing. You never know what’s down the road. Be encouraged, finish what you start, and go for it.

Watch their classic, We Are Family here: