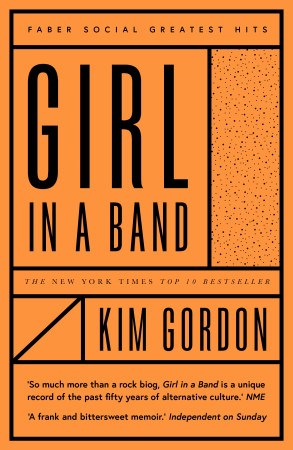 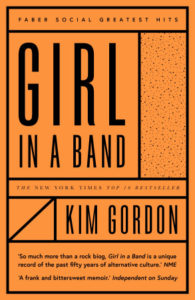 Kim Gordon: Girl In A Band

Founding member of Sonic Youth and solo artist Kim Gordon’s autobiography has been reissued in a new paperback edition. Dave Beer takes a look for Louder Than War.

There is a no-nonsense bluntness to Kim Gordon’s writing. No litter, no unnecessary detours. Few frills, just straight storytelling. Maybe that is no surprise for fans of her music. Yet Gordon’s autobiography Girl in a Band  –  which was originally published in 2015 and has recently been republished in a new paperback edition  – is even more disarming than those songs. Raw but vulnerable. Arch but honest. Questioning but assured. Neat but not tidy. This is rock memoir at its best.

Early in Girl In The Band, Gordon recalls a comment about people paying to see bands so they can watch people being confident. By contrast an autobiography is quite different. They are at their best when they give the reader a view behind the facade. And this is what Gordon does so well, she readily switches from confident artist, bassist and singer, to revealing and tender writer.

The cropped chapters tell of the unknown whilst adding layers to the better-known. Framing the memories and reflecting its urgency, the book starts with a kind of false ending  –  the final Sonic Youth appearance and the collapse of the relationship at its centre. It gets moving straight away, with Gordon posing questions that echo through the book. At one point she asks if she is really as empowered as she seems. The story isn’t delayed or clogged by overly long descriptions of growing up or by the minutia of the everyday. It is pacey and selective. Gordon largely draws out the things that seem important to what came after. The book’s rhythm is pretty quick with lots of short chapters. It never hangs about for very long.

There is also a real openness to the accounts. Unsettlingly personal in places, the book moves seamlessly between the music making and the very human experiences and relationships of those involved. The result is an inseparable blending of the personal and the artistic.

As might be anticipated, the book describes a network of artists and collaborators – from the art and film world, through musicians and industry figures and to her own fashion label. These characters bump into each other at different times, building up the background context for Gordon’s own creative endeavours. We also hear of her influences and sources of inspiration, which are eclectic and unexpected. Through the gestation of Sonic Youth in the early 1980s, we follow Gordon’s career and eventual move away from the band after 30 years. The book is built around the story of the demise and tearing apart of these relations.

Moving beyond an account of her life, the book occasionally switches modes with reflective asides on creativity, the power of culture and gender politics. Take for instance this powerful passage as Gordon reflects on the perceived roles and restrictions placed on women:

“In general, though, women aren’t really allowed to be kick-ass. It’s like the famous distinction between art and craft: Art, and wildness, and pushing against the edges, is a male thing. Craft, and control, and polish, is for women. Culturally we don’t allow women to be as free as they would like, because that is frightening. We either shun those women or deem them crazy. Female singers who push too much, and too hard, don’t tend to last very long…But being that woman who pushes the boundaries means you also bring in less desirable aspects of yourself. At the end of the day, women are expected to hold up the world, not annihilate it”

This type of social critique finds its way into the stories and lifts it above a standard rock bio. It gives the book a reflective tone whilst also placing Gordon’s experiences in their wider context. There is quite a bit in the book about expectations – including  those placed on Gordon along with those placed on the band and the music  –  and how they were defied. This is a book as much about defiance as it is about expectation. As the above passage shows, Gordon’s book is about her experience of boundaries and limits, and how her creativity sought to circumvent or push at them. At one point Gordon admits that she has “always felt uncomfortable giving people what they want or expect”.

Occasionally the choppy chapters leave you wanting more detail ,  they tend to move on a little too quickly at times. The first half of the book sets the scene whereas the second half focuses mostly on particular records or artistic manoeuvres. It is the second half where I occasionally found myself wanting a bit more of an insight into the writing and recording of the songs. There is plenty of that, but it remains a bit tantalising in the volume and depth of detail.

The understated storytelling on display here fits with her view that “the radical is far more interesting when it looks benign and ordinary on the outside”. It also fits with a sense that Gordon doesn’t see herself as being all that important – three or four times in the book she expresses surprise that different people have actually heard of her and her band, like she is constantly confounded that anyway has paid any attention to the music. Gordon seems to like to catch you out, to subvert an expectation or upset an underestimation. This is a rock bio on the surface but it has powerful ideas hidden within it.