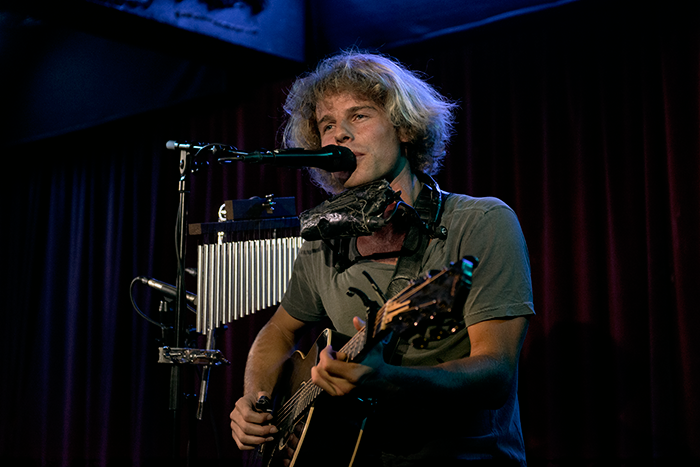 Kim Churchill photo © Tess Donohoe, as are all other pics on this page.

Nick Holmes (words) checked out the opening gigs of a 12-date trek around England and Scotland, alongside Tess Donohoe (photos).

At the sold out Borderline Che Aimee Dorval was palpably nervous before her first ever UK solo gig. The Canadian played in England last year with Casualties of Cool, her “space-country” band featuring Devin Townsend, debuting at the Beautiful Days festival before a highly acclaimed show at Union Chapel. It would be a quite different prospect taking to the stage alone. Despite the butterflies Che endeared herself to the packed venue with self-deprecating humour, mostly aimed at herself. Introducing “Back Again” she raised laughs claiming she was once a “loose woman”, but assured the audience that is no longer the case. The majority of the crowd seemed enchanted by her rich, soulful voice and confessional songs drawn from debut LP “Underachiever” and recent “Volume 1” EP. A real show-stopping moment was her stripped down version of Casualties of Cool’s “Flight”, the lyrics of which were written by Che. What was a gentle lament on record became a primal howl of anguish live. After that outburst of raw emotion she closed her set with delicate strains of “Lights Out” and judging by the cheers and applause she had made a whole lot of new friends. The following night in Bristol she was also rapturously received after a noticeably more confident and equally emotive gig. 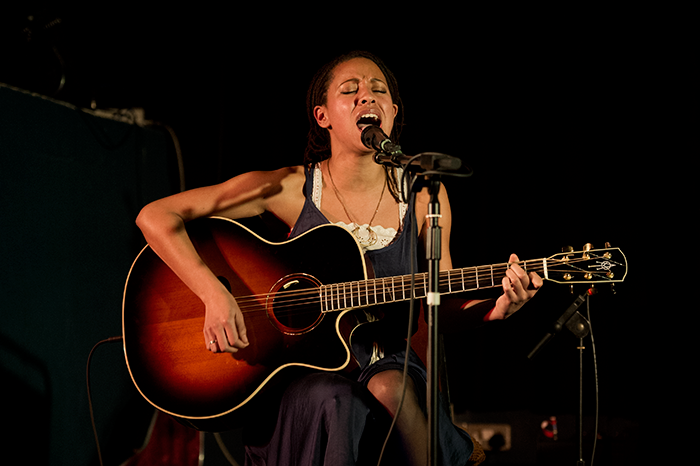 The London crowd gathered to see Kim Churchill varied from students to suited and booted City-types to middle-aged women to elderly gay guys. It must be said the young Aussie is almost unfeasibly good-looking with a wild blond mane and warm manner. The 24-year-old revealed he always dreamed of the touring life when he was a kid and has spent the last half decade relentlessly pursuing that goal. His recordings are an easy and often fun listen but the Kim Churchill live experience is something truly incredible.

The stage looked like someone had abandoned setting up a rehearsal space but it quickly became obvious why this odd layout was so. Churchill is literally a one-man band. Sat on a chair with guitar on his lap he plays a kick drum with his left foot, tambourine with his right foot and occasionally waves a hand or an elbow to hit chimes hanging beside him. He also wears a gaffer-taped contraption across his chest containing a harmonica and vocal effects. 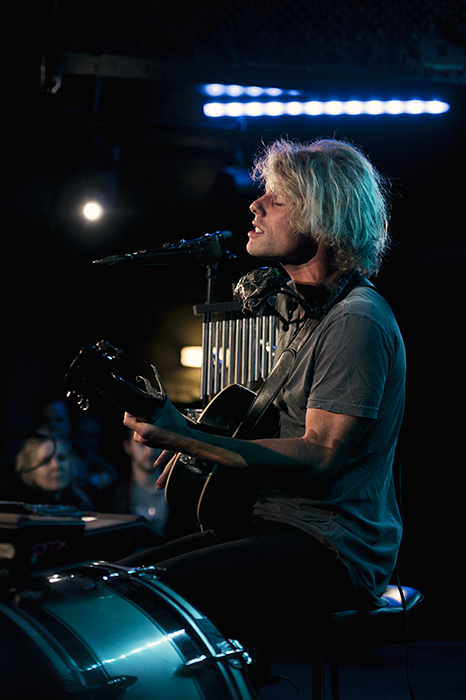 When Kim started up the effect was mesmerising. Songs including “Backwards Head”, “Canopy” and furiously catchy “Single Spark” were driven by thunderous percussion played with perfect precision and the walls of the club were rocking. Throwing in a cover of Led Zeppelin’s “The Lemon Song” and a nod to Bob Dylan, the set flew by at a mighty pace. There were brief interludes where Kim paused to pontificate on life and also pay moving tributes to his grandparents, who inspired two of his songs. By closer “Loving Home” the audience was buzzing with everybody wearing broad grins, as well as the man himself. Twenty-four hours later he added an energetic re-working of Red Hot Chilli Peppers’ “Californication” to his set.

In their own distinct ways both Che Aimee Dorval and Kim Churchill are extraordinary talents. They should continue to win new admirers wherever they go. In an age saturated with manufactured acts and cheesy TV “talent” shows these two young artists prove there is real skill and passion to be found.

Kim Churchill is online at kimchurchill.com. He is also on Facebook and tweets as @kimchurchill.

Che Aimee Dorval is online at cheaimeedorval.com. She is also on Facebook and tweets as @cheaimee.

All words Nick Holmes, all the photos © Tess Donohoe. More writing by Nick on Louder Than War can be found at his author’s archive and more photo’s by Tess can be found either here or at her website: tessdonohoe.com. Finally, Nick tweets as @oldenick666 and Tess as @tess_donohoe.