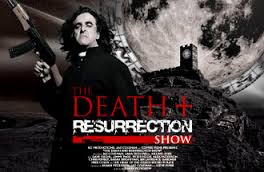 The Death and Resurrection Show

“Patterns I’m finding, as pain and joy and sorrow mingle”

Like all truly great bands, Killing Joke don’t just have great songs, great albums, and a definitive sound, they have their own mythology. From the dark hints of occult rituals cementing the band at their origins, to the chaos that surrounded their collapse and rejuvenation during the whole Iceland episode, there are things about Killing Joke that have taken on the feel of creation myths told around a campfire at night. If they aren’t true, perhaps we’d all rather not know.

The result of ten years of filming backed with a wealth of archive footage, ‘The Death and Resurrection Show’ is film-maker Shaun Pettigrew’s exhaustive (and presumably exhausting) attempt to cast aside the curtain of pagan mystery which surrounds this most apocalyptic of bands, and provide a band history, both musical and magickal. And if you’re here strictly for the facts and figures, be warned – at the film’s outset it declares itself as based on Jaz Coleman’s dense, labyrinthine ‘Letters From Cythera’ book.

But a documentary this nevertheless is, and there’s perhaps a danger of de-mystification, that having these tales of great renown explained may render them ordinary and unexceptional – however, it says much for the band that this isn’t the case. For example, the legendary exodus to Iceland as the band fractured following the release of Revelations in 1982 turns out to be an appropriate cauldron of weirdness. Jaz’s mum kicks things off with a suitably down-to-earth perspective (“We made him a birthday cake and he disappeared”), Big Paul and Youth offer their (still) bewildered takes on the subject, before Jaz and Geordie and a collection of Icelandic associates relate stories of interpreting Aleister Crowley and levitating on glaciers. And there you go – like a scientific explanation of the fog that shrouds the mountains, everything has been explained, and yet still nothing is clear.

As the chronology moves along the years, wild ideas and fantastical anecdotes ping about like atoms in an explosion – out-of-body experiences onstage at the Reading Hexagon, haunting apparitions and dreams while recording in the Great Pyramid of Giza, Dave Grohl managing a wide grin while physically holding Jaz back from aggressively haranguing a bewildered fan on the street.

And of course, what a soundtrack! Anthems of great, thudding menace and ecstacy, the perfect backdrop to the unfolding personalities on the screen. There’s lots of great live footage, although technical musical insights are far outnumbered by mystical ones.

An impressive array of commentators are assembled – each member of the original band talk at length, Jaz’s mum settles round her kitchen table to offer recollections (calmly observing at one point that her son thinks too much and “verges on paranoia”), while there’s also a great coven of occult associates, from the band’s astrologer to various fellow seekers after mystical insight.

From an earthbound point of view, producer Chris Kinsey and Malicious Damage owner Mike Coles offer the best insights into the nuts and bolts of the band machine. If you want to know how Big Paul and Youth felt about leaving and rejoining the band, you’ll get that from the men themselves, but you’ll get plenty more on Jaz’s research into Rosicrucianism and the alternative realities of Universe B. The camera generally focuses on just the singer’s mouth for his interviews – and laughing wildly, he guides the film’s direction, as he has so much of the band. With a running time of over two hours there’s scope to cover an awful lot of ground, and yet also at times the film can seem frustratingly sketchy – part of the price of tackling a band that in all ways possesses serious depths.

At the conclusion you may feel in many ways enlightened, but in many other ways more disorientated than ever. There’s a sense that the larger entity of ‘Killing Joke’ – possibly the entity referred to obliquely by Coleman as the fifth member – is something that it may be best to witness from a safe distance.