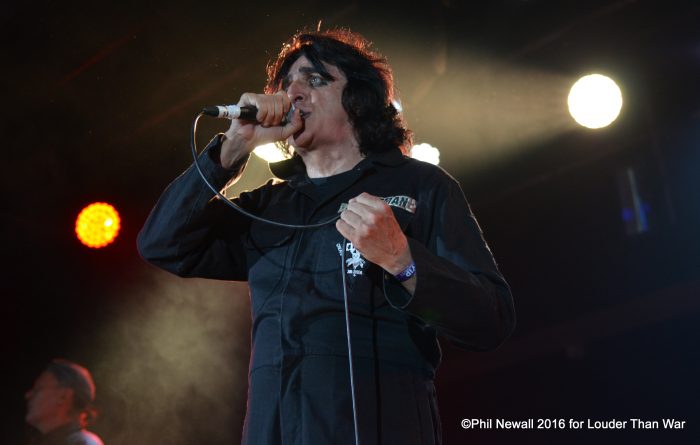 Could this be the best I’ve seen Killing Joke?

The final headline band of the great Rockaway Beach Festival is on powerful form. The set list is cool with a visit to the rarely heard “Complications” or the enormous version of the recent “I Am The Virus” – one of our favourite Killing Joke songs.

The band are heavy hypnotic and tight. Everything is in place. Paul’s pounding drums that are a great crank of groove, tribal patterns and neo-prog complexity that are always perfect to dance to (we have a in depth interview with Paul here) , Geordie’s guitar is that most unique of tones – that wall of sound with so much detail that even one bar of a song will keep you hooked for hours whilst Jaz is palms outstretched, preacher man perfection with eyes burning holes and words delivered with a rare intensity. Youth’s bass lines are steeped in black music with funk groves, Motown rush and dub space combining to give the band its own unique energy and it’s at this point it hits you that the reason the band so good is that live sound is perfect. The PA is totally cranked and pulverisingly loud; but also oddly clear with every instrument breathing and audible, and the four corners of what makes Killing Joke so damn great are all present and audible.

This has been a day spent deep in the dense thicket of Killing Joke – a band that remains utterly compelling after nearly four decades.

First there is their film, The Death And Resurrection Show, which is a sprawling, complex and enthralling work detailing this most unique of bands and their curious relationships and that powerful and dark and deeply intelligent worldview. The jagged thought processes keep you on your toes with each member of the band dabbling in dark intellectual arts and thinking out of the box ideologies that are provocative and dangerous and keep you alive with ideas.

The best part of the film is the Iceland episode when Jaz quit the band to avoid the impending apocalypse and the shots of that strangest of countries, with its wild and unfettered landscapes and dark, glowering landscapes perfectly matches the band’s own music just like it had done for the Stranglers famous Black and White launch a couple of year earlier.

On one level Killing Joke are not an easy band and that’s a good thing – who wants easy – but on another level they somehow manage to cram all this madness and wild and powerful music into a type of pop.  Jaz can sing like a choirboy -a  fallen angel with a deceptively sweet voice alternating with the preacher man gone  The Shining at his most impassioned apocolypto visionary delivery. The band also have that dark funk undertow and tonight they are the greatest dance band in the universe. This is a music to dance to!

That they also manage to combine this with the intensity and claustrophobia of punk at its most dangerous and with a performance that is terrifying and compelling which part of their genius. The terror now, of course, is that Jaz Coleman’s dark visions now sound like news bulletins instead of wild visions and his truth is everywhere in the totally fucked up world. Now Killing Joke are dancing on the bones of the collapse of everything where once they were a heavy decibel Ides Of March with a wild vision they are now a tsunami of raw power and vision that fills a room with its treacle of dark energy.

The set list is a lesson in controlled fury and fierce intelligence -kicking off with the anthemic Love Like Blood and the almost pop of Eighties before getting 21st century dark and heavy with Autonomous Zone and then a blistering take on 1994’s Exorcism before a run of the classics that were the foundation of this institution – Requiem, Change, Turn To Red and then bang up to date with perhaps the night’s highpoint – the tribal avalanche of  I Am The Virus and then back to the template songs – Bloodsport and Complications
before cranking to the climax with Dawn Of The Hive, Whiteout, Psyche and
Pandemonium.

The encore is staggering – a suite of intense power with Empire Song, The Beautiful Dead, Unspeakable, Wardance and The Wait.

Long term gatherers are talking fast and wild after the show, claiming that this could well have been the band at their best ever and it’s hard to argue with that. History has made sense of the group and the long term is good for them. In 2016 Killing Joke are still out there on their own – a rock band that sounds like a pounding electric take on the dark classical music, a funk band that is also high decibel loud, a rock band turned inside out that you can dance to, a dance band that stares the darkness in the eye and dark and wild eyed visionary take on the surrounding madness and carnage of 21st century bit also  party band and a perfect antidote to a world gone mad.