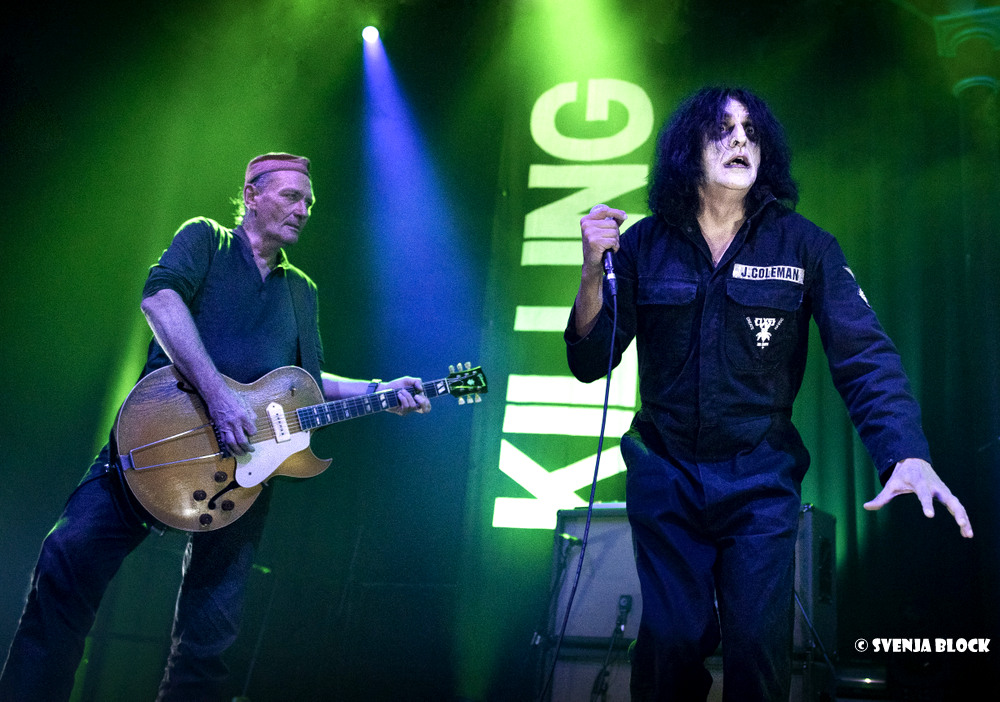 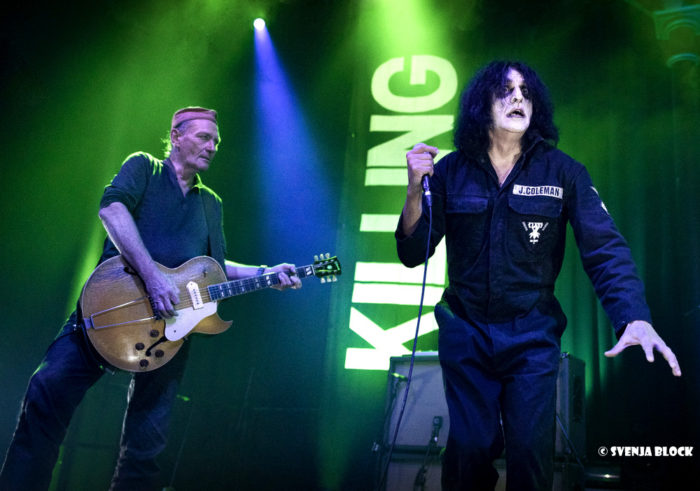 We were all out tonight, standing alongside blokes in their Motorhead T-shirts, their mates, sons, daughters, wives and re-acquainted school mates in their newly purchased Killing Joke T-shirts as well as the odd Eagulls ,Fat White Family, five Siouxsie and The Banshees, four Ramones and seventeen T-shirts bearing the name of Nirvana on display (we didn’t really count them).

For a few of us this is a time to remember one or two absent friends who would have attended this if they were still around. Forty years is a long time, most of us here will have friends we raised a jar to tonight before returning to the perimeter of the mosh pit and realising we can’t go any further forward without the risk of getting injured in some daft way. The band themselves raise a glass to the departed Paul Raven. It’s one of the unfortunate realities we share after such a long time. 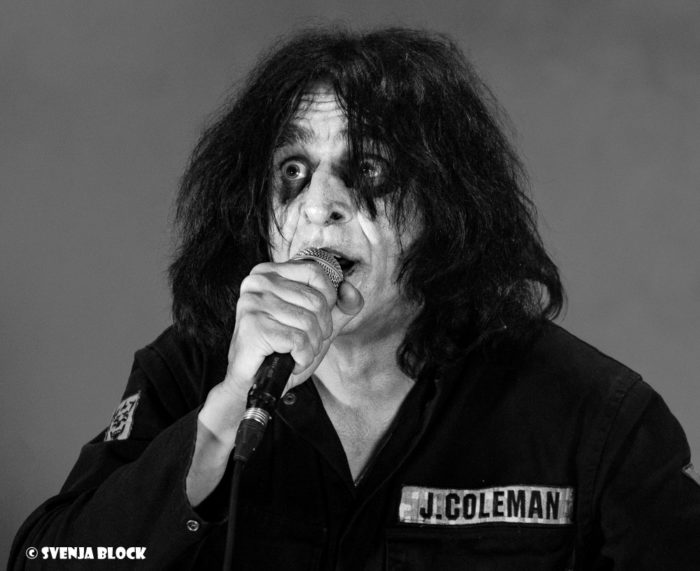 What makes an evening such as this a great occasion is the recognition that whilst the years may have not been kind to some of us the music of Killing Joke has continuously got better and anthems such as Love Like Blood, Change, Requiem, Eighties, Wardance (there’ll be a set list up on the ‘net somewhere) still don’t sound terrible, long past their shelf life like so many other bands’ music that we’ve crossed paths with in the distant past. Then to top it all off we still have a band currently in possession of a barrel of new tunes that a few of us haven’t been making enough effort to get familiar with yet. Tonight it is reinforced that this band are still just as brutal, fierce, sincere and thrilling as they were when we first witnessed a few songs at a CND rally in London’s Trafalgar Square in 1980. . . . .

‘ This aint gonna change anything, bombs aren’t gonna be stopped being made, they’re still gonna be dropped, what’s the point ….? we might as well just have a laugh instead’ – Killing Joke, CND rally 1980.

That was an afternoon that we doubt has ever been matched by anyone in the capital. The Pistols at the 100 club would have been rubbish. The Stones in Hyde Park was probably rubbish also but witnessing Killing Joke’s appearance in front of every leather Jacket wearing, crazy hair coloured fag smoking teenager on a Sunday afternoon has still never been bettered. One of the biggest demonstrations in London ever according to some reports and somehow underneath Nelson’s Column where earlier speeches by amongst others, Tony Benn and Michael Foot had been taking place were Killing Joke (and The Pop Group).

That’s where all this began for some of us. 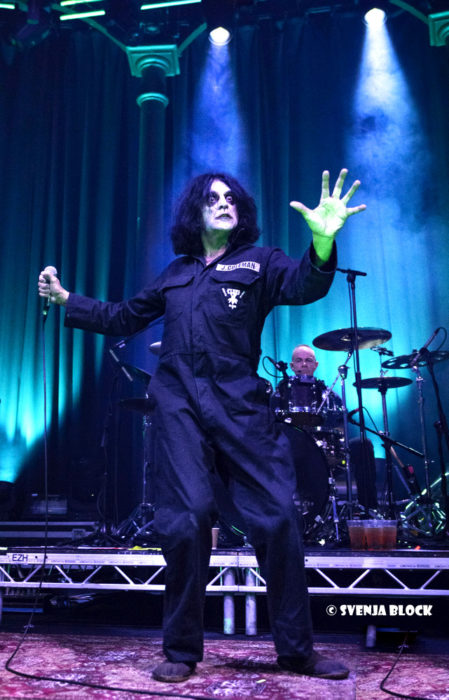 A big Saturday night out a few decades later then. One that precedes the over ambitious breakfast, glass of water and return back to bed the next morning. This isn’t a night of nostalgia though, this is another Killing Joke gig. A gathering of people still ‘preying together and staying together’ and celebrating the new tunes as much as the old songs from past albums.

The band themselves still look as magnificent as they ever have done. Jaz Coleman in his now trade mark boiler suit, white face make up, big eyes, big voice and master of the room as he maintains an intensity that he’s never let go of over the past four decades.

Drummer Paul Ferguson plays the drums as they were intended. No sloppy fills that annoy and slow down. That would be terrible, this is the opposite of terrible thankfully. Imagine being able to plug your guitar in every night and play the intro to Requiem. You can see why they do this on a nightly basis (tonight is the final night of the ‘Laugh at your peril tour’). It looks fun, we would all love to be in this band, they make it look easy but we know it certainly isn’t.

Killing Joke have reached the tail end of 2018 as the best of the old lot. A new generation already exists of twenty somethings referencing this band, a band that currently sit comfortably amongst the bands we hear today when we switch on our radios or wander along to one of the many small venues that have always been as instrumental in allowing us to reach evenings such as these as the bands and entourage themselves.

The idea of going to see Killing Joke yet again can also be a horrifying one for some of us. Its a kind of defence mechanism one has to posses in order to prevent getting onto Eurostar, booking numerous hotels and seeing as many of this bands shows as you can cram in. There’ll be many people that do this, we were tempted ourselves and you can spot the people in the room that have achieved it as they say their farewells and take more photos of each other as the rest of us go searching for a last pint before participating in whatever it is we will wake up regretting the following day.

Attending a Killing Joke gig is one you can still rely on though and this is something you cannot expect from many acts that have been active for this long. We still don’t know which of today’s young bands will still be able to tread these same waters themselves in three decades time, the statistics aren’t great, there won’t be many. Watching a band (still) in their prime is very different to watching a band with a wry smile, a puff and a pant. Killing Joke, thankfully fall in the former category. A unique position to be in especially with over fifteen albums to chose their set from.

Like a Factory Floor show or those techno nights we went to in the 90’s we know what we’re getting before we walk through the doors. We know we won’t get the chance to nip away for ten minutes whilst an acoustic guitar comes out so we hit our groove from the first four bars and are still lost in this for a couple of hours until the guitar stops, the bass has stopped prodding us in the chest, the lights come back on and we are told to leave, just as some of us have done over the years or in some cases many times over recent weeks.

Another thunderous display by Killing Joke then to savoir amongst the others we will never forget. Still throwing out a set of angry loud mid paced tunes full of twists and turns that no one else has come close to bettering. Still here and still in their prime. 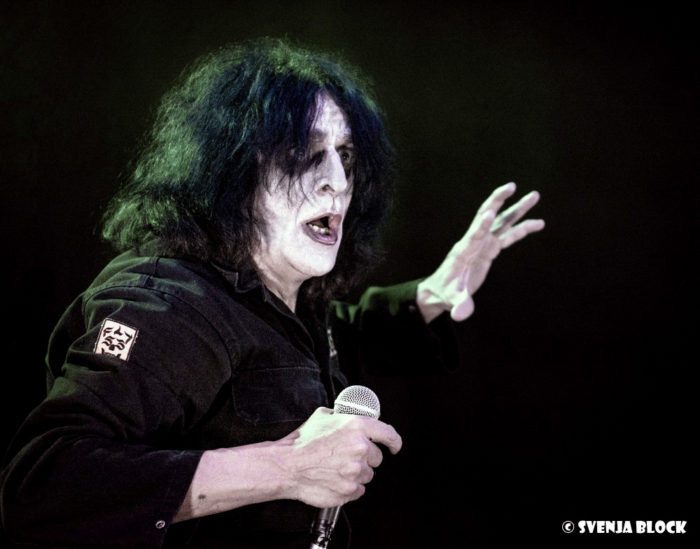 Tonight’s show just like many other Killing Joke shows around the world was another night full of familiar faces we recognise but are unsure if these are people we ever met. The same people we imagine who marched against bombs nearly four decades ago, attended many other events that we all raised our pints too and all know a decent tune when we hear one. Forty years and still getting better, still being one of the most earnest and committed bands around today, still reminding us that there’s nothing wrong with going out and having a laugh whilst the big wide would is still just as fucked up as it ever was.

Everyone in this gathering, out again on a Saturday night still ‘ avin’ a fukin’ laugh’ as requested back when we still lived at home with our parents. Powerful, brutal, still brilliant and still not over.

Here’s to the next ten. 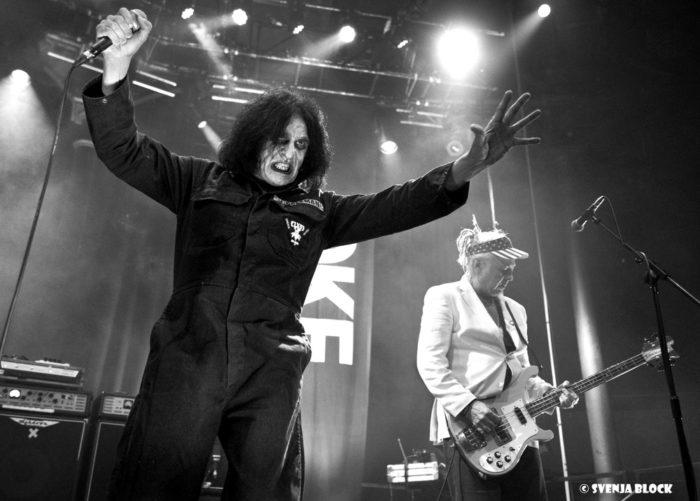 All photos © Svenja Block. You can find more of Svenja’s work at her Pixieset, Facebook and at her Louder Than War author’s archive.