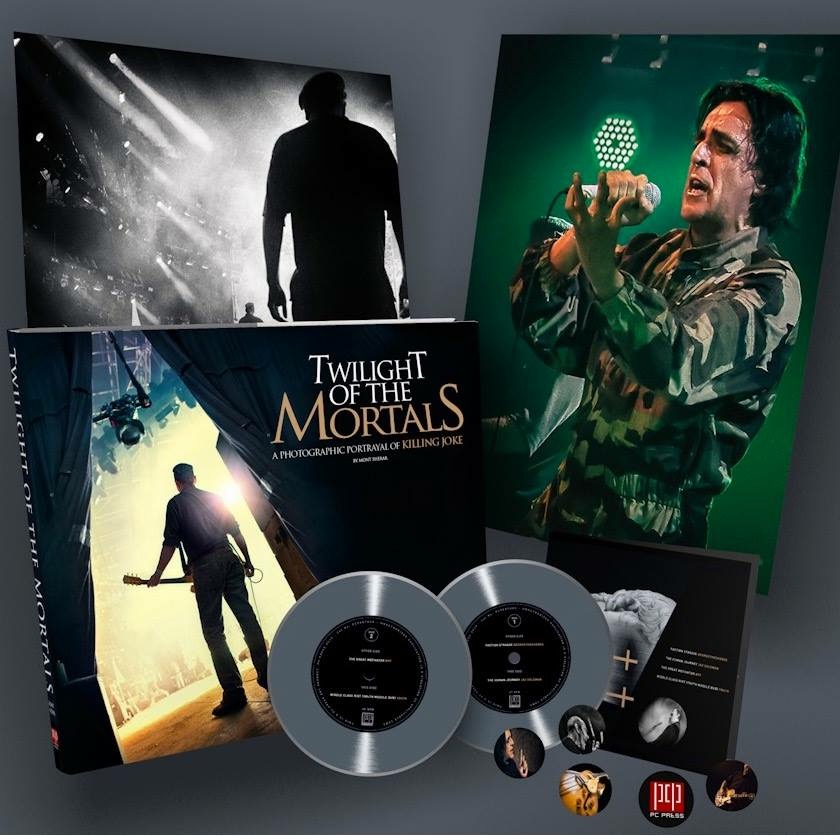 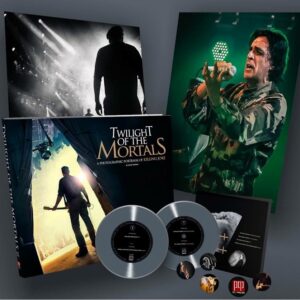 The new photo book of Killing Joke by Mont Sherar looks like a work of art. Great photos of one of the great bands – it’s a beautifully packaged insight into one of our most mysterious bands.

Pre order the book from here

In the past, is was an unusual, or perhaps unheard of practice to review and discuss (in artistic terms) any sort of promotional media. Media that was viewed as advertisement in any way was seemingly stripped of artistic merit. Not always, but most of the time. The 21st Century has changed all that by allowing those with vision to have a digital platform to present their works to a global audience upon. This phenomenon results in producers of amazing things being able to express themselves without corporate compression, naturally showcasing what they produce with individual style, pride and craftsmanship.

What happens when one of these visionaries happens to have a lifetime of interest in one of the most powerful, enchanting and enigmatic bands ever formed? The art explodes in every direction. Maestro manifestos, portraits, poetry, percussion, voltage, strings and divine orchestration between the visual, aural, spatial and spectral elements coalesce. They dance to a divine cacophony laden with textures, timbres and tonal intrigue. Indeed, I am describing the dynamic new audio-video production for the Deluxe Collector’s Edition of Mont Sherar’s Twilight of the Mortals (limited to 350 copies). This tome of tangible analogue media is not only the definitive photographic portrayal of Killing Joke, it is also a double 7” limited vinyl set with exclusive tracks from Jaz (spoken word), Geordie, Martin ‘YOUTH’ Glover, and Big Paul Ferguson.

To add weight to the equation, this media is presented on an independent publishing/pressing label that puts quality and presentation above quantity and profit. We are talking about PC Press. This unspeakably enveloping multi-media experience requires no internet to get immersed. You simply open the book and drop the needle… and we are drawn towards the hum… which is where the video begins…

The pulsing static of Jaz Coleman’s Prophet Finger filter-sweeps us into droning captivation, setting the scene. Eerily beautiful, iridescent stone figures float crucify-eyed, looming from cavernous sockets of infinite scope. Those caught in the crosshairs of the gaze are transfixed. These visual elements can only be the magic sleeve art direction and design by legendary Steven R Gilmore – a seasoned master of his craft in the art of iconic design and vision.

The Human Journey begins with an urgent, gauntlet-lay-manifesto by Jaz. Like the music of Killing Joke itself, a kind of raw conviction and genuine aura-of-awe are apparent in his tone. His excitement is palatable as he describes the ethos, lifestyle and practice of Killing Joke. You get the sense that Mont captured this inspired speech straight after a triumphant creative session and that is because… he did. Actual photos of the session fade in and emulsify, further hurling us into the inner sanctum of the session that became the masterwork now known as Pylon.

All the sudden, the needle drops into a groove entrenched deep in primal draw. The circular percussion evokes a primordial sense of vertigo as we spiral into an implosion of low atmospheric tonnage. The beat has serious weight, power and drive that could make a cadaver dance back to life. The unflappable groove is accented by low, loose and earthy shovels of hefty bass riffage that brutishly bury us deeper into the tale of The Great Motivator. Big Paul Ferguson poetically describes the ecosystem of fear and how it gets fed like a flame that perpetually burns and consumes all around it as he savages the skins in that way that only he can. Mont’s video treatments dynamically react to the music in a way that isn’t merely beat-synced, but nuance-synced. A flash of feedback from Mark Gemini Thwaite’s enthralling guitarchestra atmosphere can knock the camera into a tiny epileptic fit that shrugs off back into the beat as the bent-mirror reflections in the revolving record pin reflect the ghostly statues leering from beyond. Their warped stone figures appear waxen, melting into the mind, propelled by the otherworldly rhythm and gyrating atmosphere. MGT and BPF make a fantastic duo and I would love to hear more of this pair in the future…

As Big Paul’s words trail off in a climactic segue, a portrait of mighty bass throbber and sonic visionary floats into view. His intense demeanour is cast in shadow so that he appears Mask-like in mid-spliff-draw – almost as if he is a shamanistic spaghetti western desert dweller eyeing up his next target. Mont spins the photo reel downward as the titanic beat of Middle Class Riot (Youth Muscle Dub) drops us into pure electronic groove. The beautiful silver vinyl disc spins us into hypnosis as YOUTH’s characteristic Mega-FI mix undulates and zaps us into hyper consciousness with every rhythmic synth stab. As surf-spy guitar rakes ripple into the track, the video reacts in beautiful bends and shimmers like a shaking melting mirror of alternate reality. The sound and vision dance in harmony, with YOUTH dismantling conclusions all the while. Glimpses of YOUTH’s beautiful paintings and creative lifestyle flicker forth in time with the music, showcasing his multidimensional scope of talents as the song plateaus into a mystifying musical mesa of earthy percussion… then the needle lifts.

The crackle and hiss of vinyl anticipation gives way to a sinister synth sequence of Wagnerian scale. As the synth line plummets, a singular guitar sound harmoniously lifts into orbit. The texture and locomotive propulsion of the riff reveals the source immediately – the gorgeous hypno-grind of the Transcendental Tone Titan. This is the timeless timbre of Geordie Walker, only this time he will be known as Geordesthechords as he takes us on a tonal trip down Faction Strasse – his first ever solo track in-which he performs and programmes every sound. Geordie’s iconic figure dominates the frame through live photos leaking into view. This gives us a peak into Mont’s incredible photo-art journey and shows the legendary guitarist from a vantage point yet unseen… the stage, or in this case, The Golden Lion’s Den. As the track tantalizes and etches itself into our consciousness, visions of Geordie’s battle-worn Warhorn glide into view. The ES-295’s iconic crackled landscape is viewed up close, revealing the patina of a near lifetime of cacophonic conduction. As the film draws toward closer, we experience a rare plunge into the glacial intensity of Geordie’s eyes up close (captured as only Mont Sherar is capable) and the mystery only deepens. Finally, the now iconic cover of Twilight of the Mortals brings the journey to its end as we witness Geordie standing at the gates of his kingdom… ready to unleash heavenly fire on the masses…