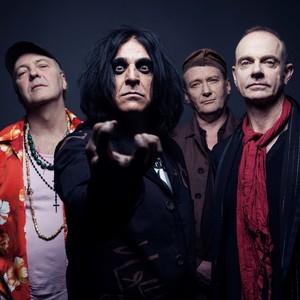 When it comes to iconic British bands Killing Joke are right up near the top of the tree.  From their post-punk roots to the heaviest industrial rock Killing Joke have remained relevant and fresh across five decades and last years smash album Pylon shows that they have lost none of their anger, energy or honesty.

Anyone who attended their sell-out tour at the back end of 2015 will testify that Killing Joke have lost none of their legendary stage presence either.  As a result fans will be delighted to hear that Killing Joke have announced a special one-off show at London O2 Academy Brixton on Friday 4th November.  With just a couple of UK festival appearances across the year this will be one of the few opportunities fans will have to see Killing Joke this year.

Jaz Coleman, Geordie Walker, Youth and Paul Ferguson, will be returning to London on a high following a hugely successful 2015 and their critically-acclaimed album, Pylon, given the honour of Album of the Year from Vive Le Rock magazine and featuring in many other top 10’s from Rolling Stone to Metal Hammer . Their fifteenth studio album release also peaked inside the UK Top 20 charts topping off an exhilarating year.

With a legacy spanning nearly 40 years, the true greats of post-punk and industrial rock had already marked their long history with the 2013 releases of ‘The Singles Collection 1979-2012’ as well as a career-spanning film, ‘The Death And Resurrection Show’.

Tickets on sale Friday 1st April at 10am  from www.myticket.co.uk / www.seetickets.com