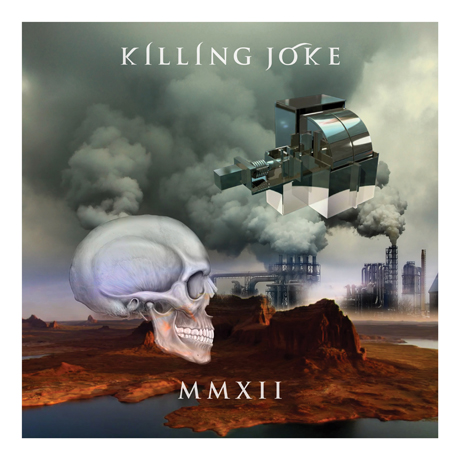 There are rule breakers and there are game changers but there are few bands like Killing Joke.

This deep into their journey they still have that insane intensity that most bands can’t even get close to at their peak and their black Magik darkness and brooding malevolence is as captivating as ever, no wonder they are Jimmy Page’s favourite band.

Tonight’s gig at the Roundhouse is perhaps the best I have ever seen the band, there is something about their primal power and sheer ability to capture a swirling and dangerous atmosphere that seems to get better with age, they have gone beyond rock and into some other deep, dark space.

The sound in here is perfect, the cavernous Roundhouse really suits their huge sound from the demonic funk of their early songs to the multilayered brooding melancholia of the new album which sounds fantastic as it is unfurled tonight. Opening with European Super State, the darkest piece of death disco ever written, it stomps in like some sort of Euro disco song from hell, insanely catchy with a great hook line chorus as it deals the Jaz Coleman politic.

The frontman is on fire, in his black overalls he is dressed for business, switching into his shamanic character and getting the audience into a spell with the stage light shining into his face creating an intense smouldering caricature, he is Nostradamus on steroids, calling the end of time, at one point saying that we better enjoy ourselves now as we may not be here next year, he stalks the stage, his body twitching at one with the music, clawing their air in the maelstrom of sound, his eyes burning with the power of band and the power of his message. His untamed intelligence rising about as he welcomes the gathering into the space.
Killing Joke are like no other and this line up, the perfect four, create an alchemical heaviness as they fill the room with their unique voodoo. Geordie’s guitar scratches and scrapes in a way that make no sense, at once simple and yet complex, it has it own evil funk and when locked in with Big Paul’s muscular pounding drums and Youth’s disco bass it makes one of the last distinctive sounds in British music.

The history of rock painted by the so called academics seems to have severed Killing Joke from their post punk tomes which don’t seem to have much mention of the band but their influence far out weighs many of their contemporaries. Few rock bands can match their power and intensity, they are the yardstick for heaviness, the meter of primal and the way they combine this with a fierce and iconclastic intelligence marks them out as a dangerous and thrilling unit.

When you lay it all on the line like this there’s going to be damage, not just mental and emotional- the gig is ear ringingly loud, not for the cheap sensation but for the visceral power that it provides in the right hands, the pit at the front is mental, there is blood, sweat, ripped clothes and wild eyes, non of which can match Jaz in the intensity stakes but they are having a good go. Sometimes it’s Ã‚Â great to get this tribal, to strip away the straightjacket of in-civilisation, the sexless pretend morals of birth, work and die of the thin veneer of religion and to get lost in the physicality of humanity and yet still keep the mind sharp and feel the spirituality of something else in the high decibel.

Tonight from the minute they take the state and lock in there is no letup, the music is mesmerising and Jaz Coleman is total charisma. They play a clutch of old songs but they don’t need the classics, this is still a band evolving and moving forwards- the last three albums have seen the back on fire and pushing their music to the brink.

The songs from the new album are the real stand outs with their end of the world message and defiance married to the hypnotic layers of sound which are amplified in the live arena. The sense of space created by the venue makes them sound even bigger and even more dangerous than the claustrophobic recorded versions. Fema Camp is dense and dark, a black hole of a song that is already welcomed like an old friend, it’s almost like a challenge to create a mosh pit from music as on the edge as this but the pit are up to the challenge, Corporate Elect and Asteroid are further examples of the band’s current epic journey Ã‚Â and of how the new songs sit perfectly in the set whilst the autobiographical Ã‚Â In Cythera looks over the burning years of this most intense of units

The new album itself is a masterpiece, it’s no easy ride and takes 4 listens to immerse yourself into its unique world view. It’s worth the work, there’s to many easy records in a time when words like alternative and indie have no meaning, when they have become bywords, words that slot into radio formats and are handy marketing handles. Killing Joke are a reminder of just how alternative rock can get with a powerful music and a powerful message. Modern culture is too full of instant fixes, fast food solutions to moral hunger, music full of additives and zero content.

Killing Joke won’t play this game, they don’t make music for so called alternative radio, they are the bigger picture- this is a serious business and the band’s current success is down to their fierce honesty and the abrasive nature of these four completely different people somehow operating as a unit. And as you watch them play live you realise that this is the key to their genius, the fact that four very diverse people can argue and work together Ã‚Â and somehow make sense of their opposing personalities is somehow inspiring- maybe the politicians can do the same.

They encore with Requiem which is an arms a lot moment and Wardance which comes with yet another great video on the backdrop- the visuals have been perfect all night matching the music with their message and their black humour and artistic brilliance. The ban cleave the stage and the crowd troops out in a trance only for the band to return five minutes later for Love Like Blood, causing a mini rush back into the room for the final Killing Joke of the evening.

At the peak of their powers the noisenik alchemists are the perfect soundtrack to these dangerous times, no longer the madmen in the corner their truth is coming home to roost.