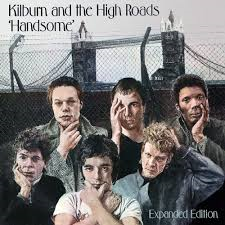 Kilburn And The High Roads – Handsome

Expanded reissue of Ian Dury’s first band’s sole album, bolstered by the wonderful “Rough Kids” single and a 1974 Capital Radio session of the Kilburns at full throttle….LTW’s Ian Canty finds that their troubled relationship with record companies which dogged their steps couldn’t quite mask the chaotic splendour of the Upminster Kids…….

“I stood with Fred (Rowe), our handler, one either side of Malcolm McLaren, whilst watching the Sex Pistols, who had safety pins, which was a sartorial eloquence I’d inspired. Leaning forward and growling and holding the microphone like I did was Johnny Rotten. Malcolm had got me on one side, Fred on the other going “What’s all that about Malcolm? He’s copying me isn’t he?” Malcolm was just there squeaking”. That quote, which featured in the documentary programme “On My Life” and in Jim Drury’s excellent “Ian Dury And The Blockheads Song By Song” book, tells you all you need to know about Ian Dury’s influence on Punk Rock. I could also say (in fact I think I’m going to) that when Chris Thomas was asked to produce the Pistols he was told to make their first single sound like “Rough Kids” (their calling card which introduces this fine re-release).

Thus Kilburn and the High Roads were hugely important to the dawning of the new age. But let us not forget what actually happened to them during their lifespan, because I feel there is a danger that they are seen now as just a footnote, a mere adjunct to Ian Dury’s further success. In fact the, by now quite overused, term “Proto-Punk” is selling them short – they had far more to offer than the average Glam Rock wannabe who managed to purloin a little of Iggy Pop’s act. Though harking back to the primal power of Rock ‘N’ Roll with little time for the frippery of the Progressive Rock scene, they drew on far more diverse elements, incorporating Music Hall, Funk, straight 50s Pop and even Blue Beat at the drop of a pork-pie hat. Though far from the well oiled machine of Dury’s next outfit the Blockheads (musicians like Humphrey Ocean were recruited for their visual image rather than their musical ability), the more anarchic Kilburns were not just hell for leather merchants, with the eclectic backing they provided perfectly complimented by Mr Dury’s ingenious verbosity and extraordinary stage charisma. Plus they pulled off the difficult trick of bringing things back to the “street level” whilst having what some might see as an Art Rock outlook.

Formed in 1971 by an arts lecturer and some of his pupils, Kilburn and the High Roads from the start looked an outside bet for success in a youth obsessed music scene and for the most part it was very much an uphill struggle. Managing to gain a foothold on the burgeoning Pub Rock scene in London, they in truth did not have too much in common with their fellow bar bands. For the most part all was pretty laidback in the hostelries, but even the more up-tempo outfits involved never had anything like the depth of song writing or bizarre visual imagery of the Kilburns. The look of the band was highly important to Dury as I mentioned above, sometimes they would be dressed to kill decked out in “Let It Rock” finery (their manager Tommy Roberts had employed Maclaren and Bernie Rhodes and his “Mr Freedom” shop was based at the same address as “Sex” for a time a few years prior) and on others they look as though they had just spent a night “over the rope” in their stage gear.

They gradually gathered a sizable following through their unique presence, theatrical performance (during an unrecorded song “I Made Mary Cry” which was about a psychopathic attack at a bus stop, Dury would whip out a gleaming knife as the number neared its climax) and off-beat music, supporting the Who on their “Quadraphenia” tour and interesting more than a few record companies. First to take the bait were Raft Records who put the band in the studio during 1974 just before the imprint went under. Subsequently nothing by the Kilburns was ever released by them (though the recordings did briefly make an appearance on the back of Ian’s “New Boots And Panties” fame on Warners in 1977 entitled “Wotabunch” – unfortunately some plum thought it was a good idea to layer strings on top of the original tracks). Still a good live draw (having by this time moved on a little from their humble Pub roots but not too far), after this mishap they really were at last chance saloon as regarded a recording career. Enter the Pye Records off-shoot Dawn. Dury was tickled to be on the same label as Max Bygraves, but this was a company very much on its uppers a long distance away from their 60s golden era of the Kinks and other successes.

At first all looked well, with the excellent Chris Thomas produced single “Rough Kids”/”Billy Bentley (Promenades Himself In London)”. Though not a hit it was well received in the press, though there was a feeling even this diamond-tough recording toned down the rawness of their live act. Reasonably encouraged by the decent critical reception though, the current line up of Dury, with long serving saxophonist Davey Payne, guitar player Keith Lucas and drummer David Rohoman bolstered by relative new boys Rod Melvin at the keyboard and bass player Charlie Sinclair, commenced the recording of “Handsome” (the projected title, “No Hands Signals” was nixed by Dawn as being in bad taste). Which is where the problems really began…..

To say that the recording process was fraught may be understating the case more than a little. Scuffles in the studio were a regular occurrence and over the first 3 weeks not much progress was made. Dawn were skint by this point and in order to hasten the recording process and thereby save money they drafted in session players to complete things in a fortnight. This took a fair deal of the skittish appeal of the band out of the equation and as a result this album has always been one to polarise the fans. Taken just as a record of the time, it is in truth pretty damn good and few other artists at this point in the 70s presented the kind of subject matter, depth of thought or such a British-centric approach as shown here.

For my part, it is more of a frustrating listen than a bad one. In the sense that there are thrilling pieces of prime Kilburns contained therein, but these are sometimes a bit stymied by the middle of the road elements grafted on by outsiders at the behest of Dawn Records. The LP version of “Rough Kids” is unnecessarily slicker, but it still has great drive and bounce. “Father” is a classic bit of low-life Dury observation, a man who “drops his toffee after lunch”, family life caught by an eagle eye. The following companion piece “Thank You Mum” with Melvin on vocals is more problematic, being way too smooth for this most knotty of bands. For a long time “Handsome” was all that Kilburn and the High Roads fans who were too young to see the band had – it is what I fell for and it will always have a place in my heart, despite the imperfections. On this first disc containing the LP, we also get all the associated single tracks and other errant offerings recorded around the same time.

By the time “Handsome” was released there wasn’t a band left to go out to promote it and Dury himself later disowned the project. Keith Lucas, angry that his guitar did not show up much in the final mix, quit the band among unpleasant circumstances, but quickly bounced back with hardy Punk outfit 999 (changing his name to Nick Cash in the process). Dury put together a different line up of the band and called them “Ian Dury And The Kilburns” but despite some TV appearances no further records emerged, the band folding after the Sex Pistols gig mentioned above. In the final throes of the Kilburns, Dury encountered a young man called Chaz Jankel and his future was assured.

What makes this reissue really special though though is the inclusion of eleven songs from the 1974 “Sarah Ward And Friends” session for Capital Radio. Much rougher than the “Handsome” versions (You can even hear some chatter from the producer to the DJ early on!), sometimes the songs go down a different path entirely with Dury’s spoken asides being deft and valuable too. “Rough Kids” here is completely differently structured with a rolling piano intro and altered sax part, but the raw power of the Kilburns in full flight being captured makes it count (especially when Dury shouts “I’m gonna smash your face in”!). Ideally this is how the Kilburn and the High Roads first album should have sounded – funny, raging, lurching musically in all directions and with more than just a hint of menace.

“The Roadette Song” is a tighter skank than on the album and “Upminster Kid” benefits immeasurably from the looser approach. R’n’B standard and staple of their early set “The Walk” finally makes a welcome appearance on disc, “The Old Bang” which also never made it to the LP is a mid-paced rocker with a jazz flecked sax accompanying Ian’s screaming vocals and the cod-Jamaican Reggae of “More Than Fair” is suitably rude and raucous. This is a lovely snapshot of the band in the “live” setting that was their strength and Dury is on top form here, obviously enjoying things in this environment. Now that is “Handsome”!

Beautifully turned out with an excellently detailed sleeve-note by Alan Robinson with some great photos, this reissue finally delivers the Kilburn and the High Roads that all their fans wanted, warts and all and all the better for it.