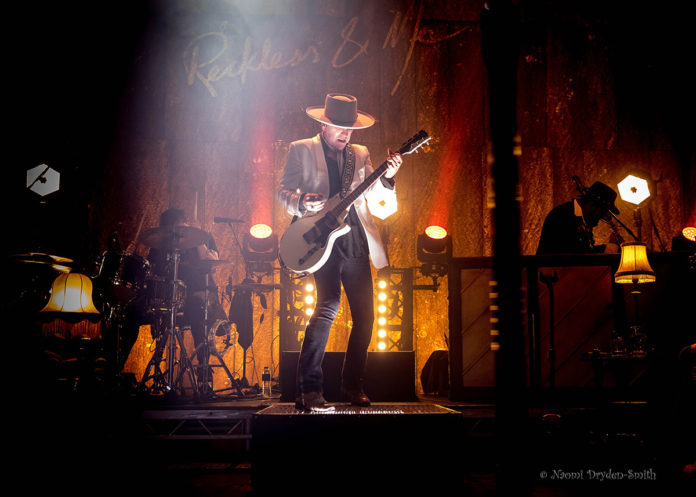 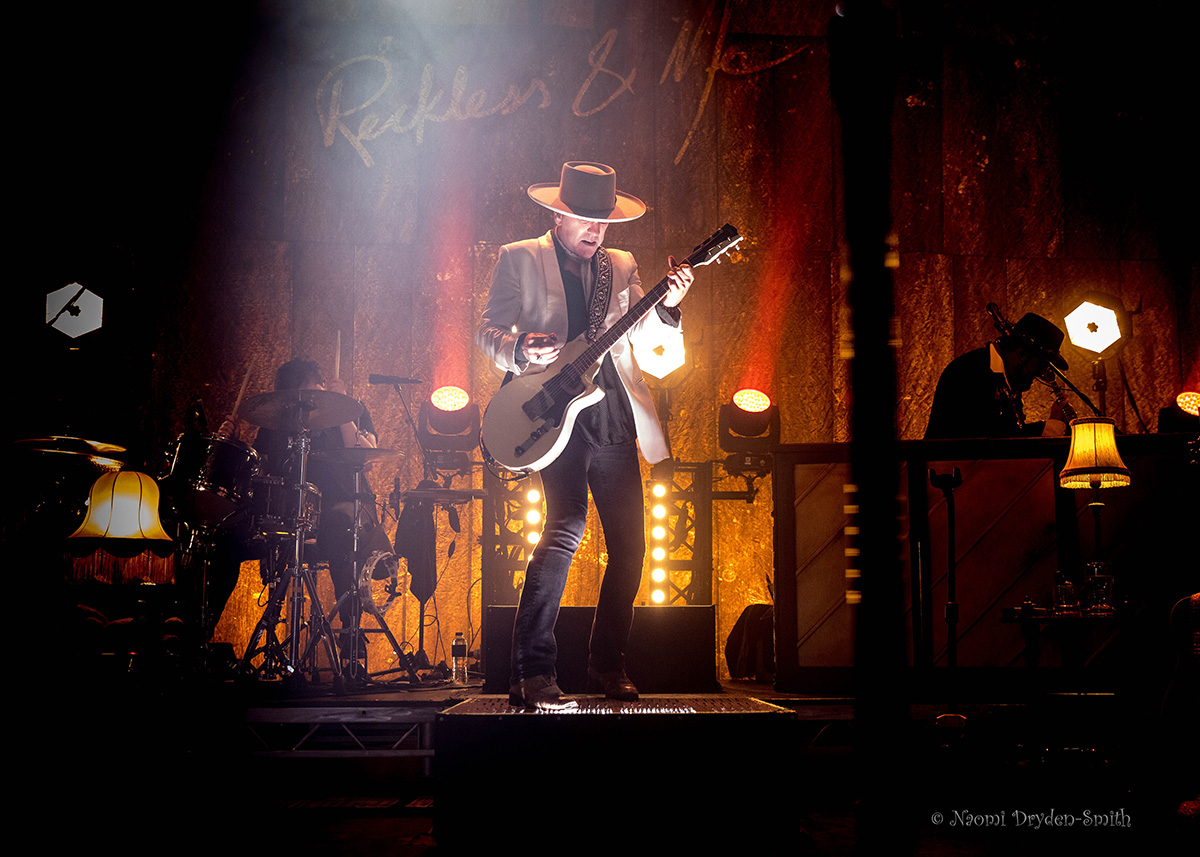 Phil Ross jumps at the chance to see 24 star and Hollywood legend, Lost Boy Kiefer Sutherland in his new persona as a country rocker, while Naomi Dryden-Smith captures him in action from the photo-pit.

“I think you’ll be pleasantly surprised,” says Vince, manning the merch desk in the foyer at The Shepherds Bush Empire. Vince is veteran road crew. A salt of the earth London geezer with slick-backed hair, a big gold earring and a mug of tea. You’ve probably seen him on the side of a stage tuning the guitars, or managing the change over between bands. He’s a safe pair of hands, well known on the live circuit, and I first met him on a Theatre of Hate tour a few years ago.

“I don’t really know what to expect, I haven’t listened to Kiefer’s music”. He looks at me carefully. “Until tonight, before I came out”, I hastily add. “It’s quite country-ish”.

The warm flush of my cheeks, informs me I may have said something stupid. “I’m reading a Johnny Depp biography at the moment”. I blurt out. “He originally started out in a rock band. Before he was an actor”. I’m trying to dig myself out of a hole. 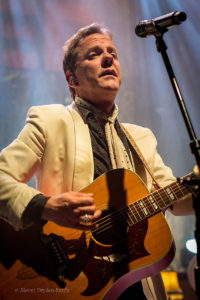 Vince has a forgiving tone in his voice, “I’ve not worked with The Hollywood Vampires, (Depp’s band) but I’ve worked with several actors who wanted to cross over as musicians,” he says. “And Kiefer’s one of the better ones. He’s a very good performer and a good rocker too”, he knows my taste, “I think you’ll like him”.

A couple in their 30s save me further blushes, approaching the merch desk to buy some shirts. I scuttle off, up the narrow wood-panelled staircase, to emerge on the third level. A plush vista of red velvet, ornate balconies painted cream with gold leaf and Edwardian grandeur opens before me.

The Empire was built in 1903 as a music hall by Oswald Stoll, a theatre manager and movie mogul of the Silent Era. He founded the now-annual charity show the Royal Variety Performance in 1912 (originally the Royal Command Performance), and early appearances at The Empire included Charlie Chaplin and his then understudy Stan Laurel.

It was sold in 1953 and became the BBC Television Theatre, where programmes such as Crackerjack, That’s Life, The Generation Game, and The Old Grey Whistle Test were filmed. From 1985 it became the exclusive set for Wogan until it was again sold by the BBC in 1991, before opening as live music venue in 1993.

So tonight, it’s perhaps the most perfectly appropriate setting for a star with such impeccable showbiz credentials. London-born Kiefer Sutherland is the film star son of actors Donald Sutherland and Shirley Douglas, and grandson of  Tommy Douglas the late, Scottish-born Premier of the Canadian Province of Saskatchewan. Since his iconic teen vampire David in The Lost Boys (1987) and regular appearances in blockbusters such as Young Guns (1988), Sutherland has become a consistent star of the big and the small screen. Known in particular for his award-winning role as Jack Bauer in the critically acclaimed series 24, he will reportedly be paid $40m for seasons 6, 7 & 8, making him the highest paid actor on a television drama.

“I didn’t know he was a singer,” says Karen, a Danish woman who sits down to my right. “I liked him on 24 and I quite like rock music, so I listened to him on YouTube, and I thought ‘yeah, why not’”. “Same here!” I exclaim in a semi-relieved, semi-conspiratorial fashion. 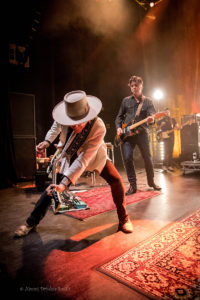 “I haven’t seen 24 or heard his music at all” confesses Karla, her girlfriend, “But I really liked him in A Few Good Men”. Just at that moment a huge cheer goes up as the house lights go down.

I look out over the balcony and into the blackness illuminated by a hundred smartphones poised to capture Kiefer as he comes on. The stage lights up to ear piercing screams from the audience. He rushes to the front of the stage. He is wearing a white, bolero-type cowboy hat, long white jacket, silk polkadot scarf and black drainpipe jeans. There are about twenty photographers in the photo-pit snapping frantically. The stage is adorned with table lamps, Persian carpets and acoustic guitars but he is brandishing an electric. A Fano Alt de Facto SP6 ’boutique’ guitar with distressed white paintwork, slung on a Mexican, cowboy-style, studded strap.

Flanked by Telecasters Sutherland rocks out. All three guitars blaze Rebel Wind, a big grungy wall of noise that Tom Petty would be proud of. “Black lives matter, and so do the blues” he sings. He turns to run up the the podium platforms between the bearded piano player in the cowboy hat and the drummer with the sheriff badge on her waistcoat. The western themed band dressed in black, contrast the well choreographed showman in white, stomping, star-jumping, kicking high.

Uplights and downlights illuminate a huge ‘Kiefer’ backdrop bearing the name of his new album Reckless and Me as he hangs his hat on a stand. He sheds the electric for an acoustic guitar and returns to the Persian rug at the front of the stage for Can’t Stay Away, a big power ballad with husky vocal delivery and a beautiful slide-guitar solo. 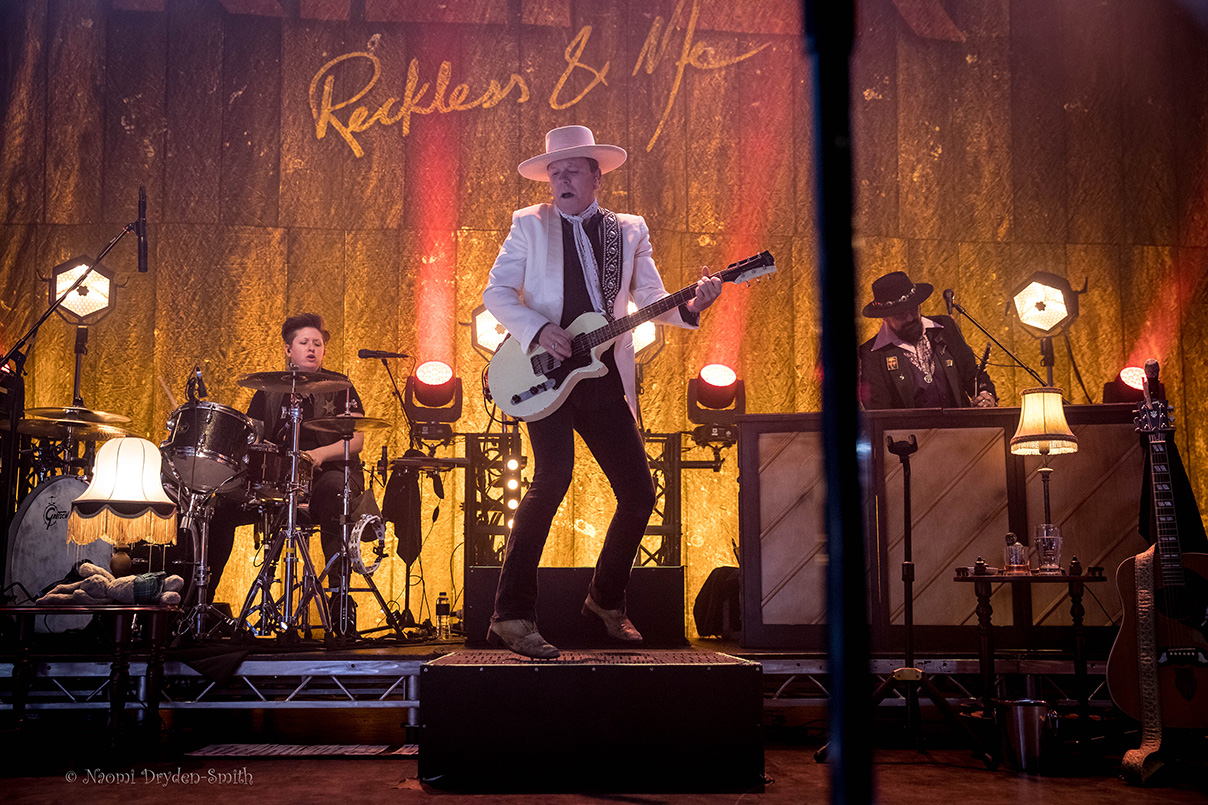 “Life’s too short not to do Something You Love” Sutherland tells us before they blast into another track from the new album. A fine song with a stonking big chorus that would satisfy Steve Earle, and a sentiment that would sit happily on an early Springsteen album. “That’s when he told me about the company setbacks, the budgets and cutbacks, boy you’re on your own” he croons.

The backing vocal “Oohs” are perfect and there is some snazzy legwork from Kiefer. He’s running again, more star jumps, rock guitar poses, he’s in very good shape. “This is a dream come true” he confides, “Thank you so much”. He’s enjoying himself immensely and so are the crowd who scream Beatlemania-style as he reminisces of his years as a Canadian rodeo cowboy in the 1990s. This is a cue for Reckless and Me, the album’s title track. The photographers have been cleared now apart from a few steady-cam men around the building, and I guess that some good concert footage will be made available soon. 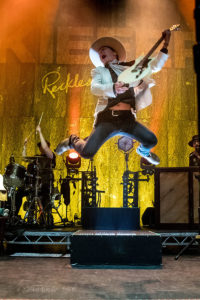 Professing his admiration for Johnny Cash and confessing his remorse for time spent in jail, Sutherland tells the story of a prisoner’s last night before facing the electric chair. And how Shirley Jean from his first album was inspired by the condemned man’s letter to his loved one, “The only girl he knew”.

It’s no surprise that the seasoned actor, convincing as a country rockstar, is also a master storyteller. Each crafted section of the show is encrusted with heartfelt anecdote and insight into Kiefer the man, his family and his humility. As he dedicates Faded Pair of Blue Jeans to “All the couples who put in the work, the blood sweat and tears to make it last”, I look across the sea of enchanted faces. They are delighted when he mentions his Netflix show Designated Survivor. They are enthralled by the touching and soul baring explanation of Saskatchewan, the song he wrote after hearing the news of his mother’s cancer.

Between screams, they hang on every word of his Bridget Jones’ Diary story, which introduces I’ll Do Anything. A sentimental ballad with an “I love you just the way you are” theme, performed in traditional Nashville style with tasteful guitar work.

As Kiefer sings the gently fading outro, “If you’ll take me as I am girl…”, a woman down below shouts “TAKE ME”, in the brief pause before he ends the sentence.

I look in the direction of her voice as he completes the line, “…I’ll do anything”, and the audience erupts in huge appreciative applause. ‘Perhaps she made the moment?’ I think.

I look around. A woman to my left is standing. She is stroking her man’s hair. He is sitting, resting his head on her bosom. Arms entwined, they are smiling, gazing contentedly at Kiefer. I see row after row of satisfied expressions, a broad cross section, young and old, men and women, teens and parents. Illuminated by the neon stage lights, their white faces flicker blue, mesmerised, as if enjoying Haagen Dazs and box sets of 24 at home on the sofa.

I wonder how many people, like me, love Sutherland the actor and were intrigued to hear he was in a band? And I wonder how many people, like me, listened to his music for the first time today? If you like Americana and movie stars, Kiefer is as wholesome as apple pie and ice cream and well worth the price of a ticket. I think Vince is right, “You’ll be pleasantly surprised”. 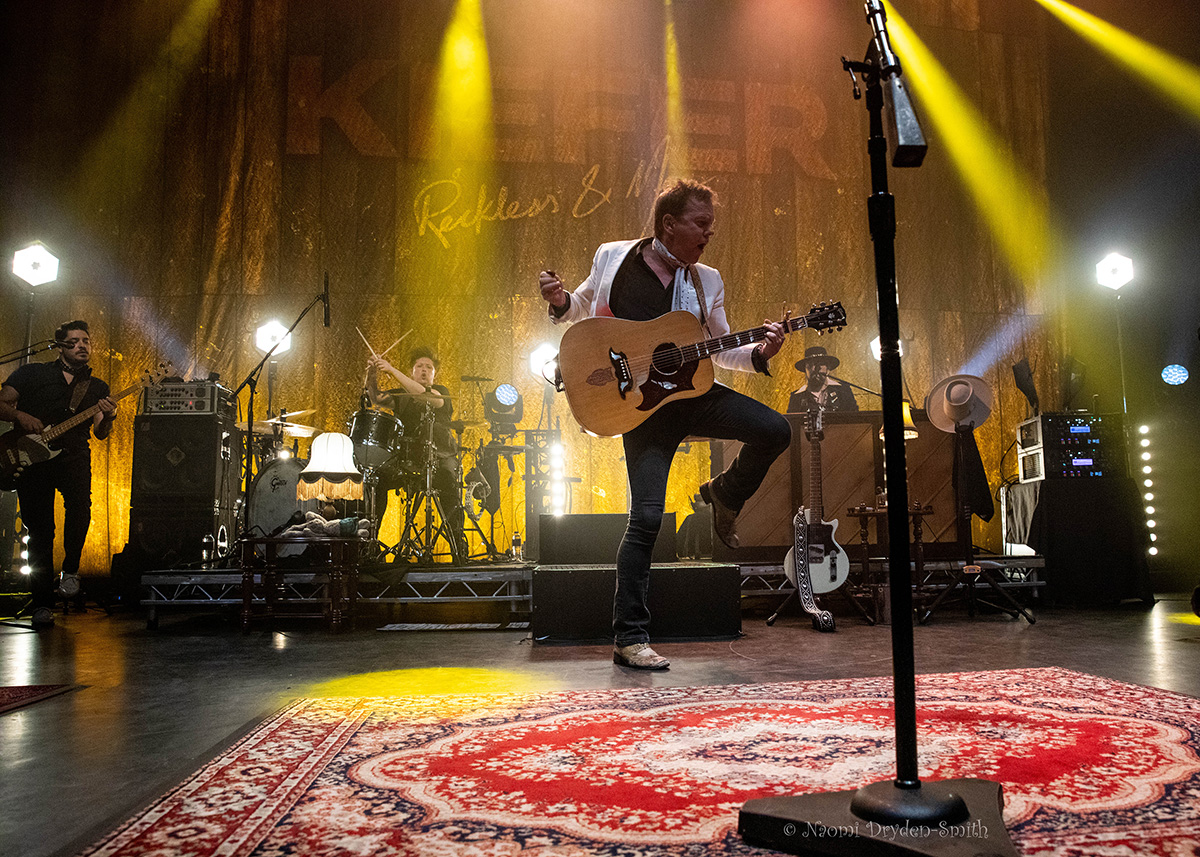