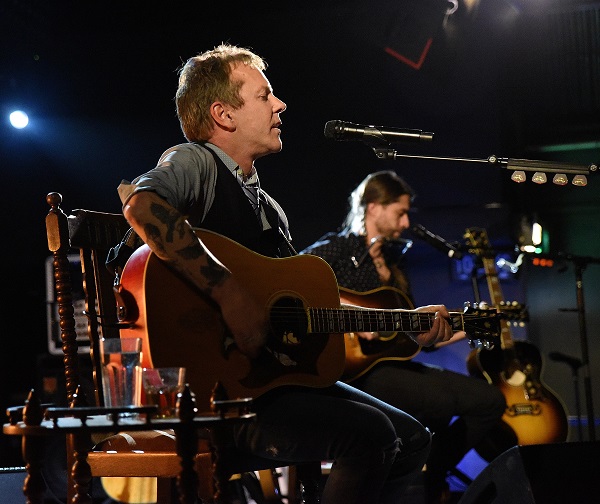 Hollywood’s Jack of all trades rolls into Manchester on a promotional tour for his second LP.

Having been a part of the some of the biggest movies of the 1980s and redefining binge-worthy TV in 24, Kiefer Sutherland has now turned his talents towards making music. With an upcoming album (his 2nd) due, the aim of this low key tour was to play some of the songs stripped back in the way that they were written. Although billed as stripped back, Sutherland was still flanked by his band of top musicians.

A dimly lit lamp adorned the as Sutherland ambled on stage to the strains of The War on Drugs’ Under the Pressure. Taking up his acoustic guitar, Sutherland opened with a solo salvo in Calling Out Your Name. Then over the course of the next few songs, the band gradually joined him making up a premier bar room band.

Sutherland’s first and foremost talent is acting, so it’s no surprise that some of the higher vocal ranges elude the man, but with that being said, the gritty and unpolished delivery of the reflective and personal songs about drinking, driving (not together) and loss made for an intimate night in the company of a star.

Nods to the outlaw country stars of the past, Cash, Kristofferson and Haggard, were noted as key influences on Sutherland. These stars all had brushes with the actual law, and the musical law of Nashville; something that Kiefer himself laughed off as having experience of! In-between each song was a long introduction that was steeped in humility, sincerity and a genuine love for this career diversion. Stories about rushing home to see his potentially dying mother, being a professional rodeo, age-old relationships, his daughter, bars he’s frequented, and ensuring that you look after yourself on latest single, the moving Something You Love.

This is a man who has seen and done a lot in the entertainment world; to hear his stories really does feel like a privilege. The music is rough and ready, and will probably never scale the heights of Cash or Kristofferson et al, however, the passion is undeniable.

Passions overflowed when Sutherland got a little antsy and got himself up and about on the stage for more upbeat numbers like Down In The Hole, a cover of Tom Petty’s Honey Bee and the forthcoming Agave (a rare sojourn into drinking Tequila rather than Whiskey – for which there could be a movement of songs!).

Poignancy is something that Sutherland really delivers on. Truth In Your Eyes was introduced with an anecdote about how a fan had heard the song and it had moved her and helped her through a tough time. The power of music really is special to many people – the power that Sutherland puts into his songs would ring true with many a music fan.

For every poignant interlude, fun is never far away. This Is How It’s Done is a fun drinking song where Sutherland lets the shackles off and lives up to the reputation of being a drinker and a party goer.

A rare moment for the crowd came during a Q & A section of the night where Sutherland answered questions about cooking (FYI – he’s good at stew), his favourite tattoos (FYI – it’s his latest one), being open to returning to Jack Bauer (FYI – if the opportunity was right), the learning curve in the music business (FYI – he’s still learning), being a vampire or a cowboy (FYI – vampire) and whether people come to see him as he’s an actor, or whether people are fans of his music (FYI – he doesn’t care; he’s just glad people show up!).
An encore of Dylan’s Knockin’ On Heaven’s Door sent the capacity crowd of a few hundred home happy with plenty of stories, talking points and most importantly, an excitement about Kiefer Sutherland’s forthcoming album.

Pictures courtesy of Steve Hampson. His website can be viewed here. Steve tweets as @rangerpeg.