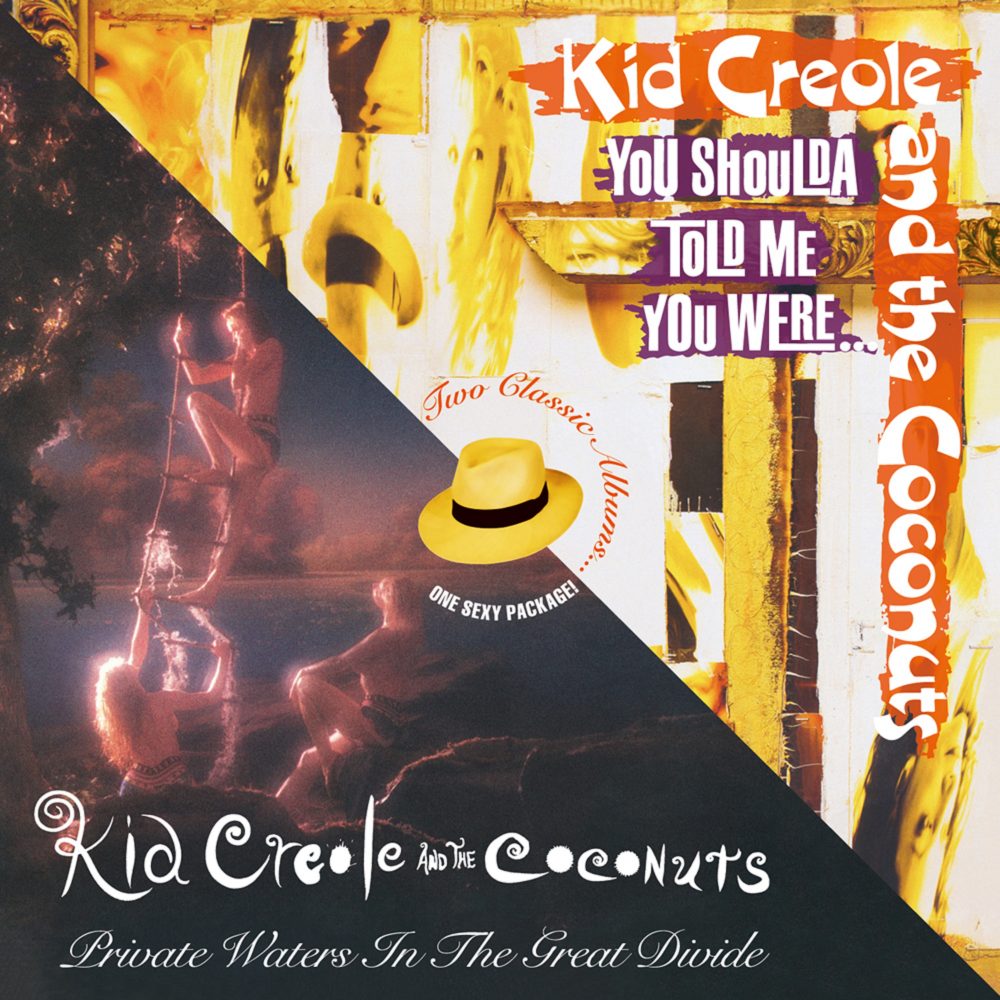 Kid Creole And The Coconuts

Twofer including a couple of early 90s albums recorded by August Darnell aka Kid Creole with his revolving line-up of Coconuts. Private Waters included the hit single The Sex Of It, written by Prince…LTW’s Ian Canty has a nose for trouble in paradise…..

The Ze label, founded by Michel Zilkha and Michel Esteban, had by 1980 become one of the hippest imprints on the planet. Launched in 1978 in order to chronicle the No Wave coming out of New York, they had released early material by Lydia Lunch/Teenage Jesus And The Jerks and James Chance and the Contortions. These artists looked to fuse the attitude of Punk with the groove of Disco to produce something different and new. The results were often stunning, but still a bit too “out there” to push the label beyond cult status, although Island took up distribution for ZE, seeing some potential. Enter Thomas August Darnell Browder, soon to become better known as Kid Creole.

Darnell had previously been a member of Dr Buzzard’s Original Savannah Band, a pioneering outfit which took the popular Disco beat and combined it with Pre-Rock Jazz and Swing styles. This band also included his brother Stanley and achieved a big US hit single in 1976 with Cherchez La Femme. With Kid Creole And The Coconuts, Darnell looked to take things a stage further.

He sought to take on the ideas he had been a part of with Dr Buzzard and update them in line with the No/New Wave. He developed as his alter ego the Kid Creole character, a slightly sleazy reprobate devoted to La Dolce Vita. Darnell gradually put together a visual look for the band of of sharp zoot suits along the lines of 40s Cotton Club Jazz/Blues legend Cab Calloway. This gave them a decidedly different and cool edge. With a big band format including three glamourous female singers under the collective name of the Coconuts on backing vocals (who would often chide the Creole character and point out his failings) with his long time foil/second banana Coati Mundi (real name Andy Hernandez), they presented a colourful alternative to the more doomy aspects of the 80s music scene.

Their first album Off The Coast enjoyed a rapturous critical reception and the follow up Fresh Fruit From Foreign Places, that came a year later in 1981, pushed Kid Creole And The Coconuts to the verge of chart success in the Britain. The music press fell head over heels in love with the debonair and witty Darnell, the NME in particular buying into the ZE hype machine. The third LP Tropical Gangsters made the breakthrough in a receptive UK. This record put Creole high in the charts, a big seller garnished with hit singles like I’m A Wonderful Thing Baby and the rather cruel Annie, I’m Not Your Daddy.

After this all-conquering high, the inevitable backlash took place. This was not helped by the weak TV special There’s Something Wrong In Paradise, which was tied in with the Doppelganger LP. By the time of the first of the albums here Private Waters In The Great Divide, Kid Creole and the Coconuts commercial profile had dipped markedly since their 1982 heyday. Coati Mundi had also flown the coop. This record, their first for Columbia after leaving Island’s auspices, looked to arrest the downward spiral. Efforts to steer them towards the charts included The Sex Of It, which bar Darnell’s vocal, screams Prince (even if you didn’t know he wrote it and put together the backing track). Though it sent the Kid and his merry band back into the UK Top 30, it misses the crucial element that set them apart in the first place.

A further attempt was made at boosting the band’s chart potential and relevance to the Pop scene at the dawn of the 90s, with an English language version of the Lambada. It is nicely sung by Cory Daye, one of Darnell’s old muckers on Dr Buzzard who contributes quite a lot of good vocals to the LP, but this track reeks of a cash-in on the brief dance craze. Happily the album itself as a whole is a return to form and should have fared better, it seems only the Netherlands and Switzerland were listening, being the only places the record charted. (No More) Casual Sex is a witty and humane response to the AIDS epidemic, with a fast and catchy hook-line and trademark frantic Latin American rhythms.

Reggae plays a big part of this LP – Jamaican guitarist Eugene Grey role in this can’t be understated, some great work garnishing When Lucy Does The Boomerang and My Love. He’s Taking The Rap is a sassy look back to Stool Pigeon and second single I Love Girls is natty and catchy, great Electro Funk that updates the Coconuts’ sound well. Of the bonus tracks included on this one, the House remix of The Sex Of It has that piano that was everywhere at the time, but the fluid bass-line keeps it from being too faddish. There’s some lovely trombone on Ode To A Coloured Man, a really good song that would have bolstered Private Waters if it had been included.

You Should Have Told Me You Were…. is the lesser of the two albums presented here, mainly due to having tracks like Your Move, which is a bit of head-scratcher with its standard 80s Pop/Electro approach and sappy ballad How Can I Forget You?. Much better is My Soul Intention, which gives the Go-Gos a run for their money. It’s Automatic has a great tight Funk groove and Something’s Incomplete is a cool duet (Cory and the Kid again). Perhaps the best song on this one is Consequently, a great commentary on slavery and imperialism in the Bahamas.

Darnell himself writes some engaging and witty sleeve notes for this set. These give an insight into each song and also grants a vivid picture of the machinations of their management/record company, forever chasing at elusive hit. Though not a band at their peak on these records, Kid Creole And The Coconuts could be generally be relied upon to entertain lyrically and knock out something danceable. This new compendium shows that while the Kid and his band were far from fashionable in the 90s, they never really let the quality drop.

Kid Creole And The Coconuts are on Facebook here