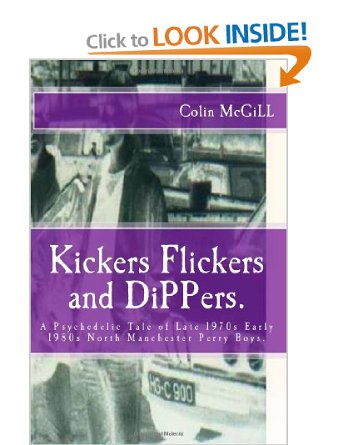 Far too often the history of youth culture is told through the eyes of the students and the bric a brac of their own rites of passage culture – which is fine. The only problem with this is that whole swathes of British culture have been missed out in the increasingly linear narrative of what happened.

The so called causal culture of the manchester’s perry Boys and Liverpool’s scallys is the key to the nineties UK mainstream. Pioneers of casual they ended up dressing agnation down and dominating culture and yet have been removed from the narrative.

When a young mani joined the Stone Roses he spoke punk rock and dressed perry boy – he’d the wedge, the trainers and the whole look- he was one of the early perry boys and he is featured partly in this book- one of the lads who happened to be one of the greatest bass players in the UK and helped carry the look into the mainstream.

As the media has become posher in the past few years this story of street culture has been removed more and more to the point where a city like Manchester has a two tier music culture- with the scenesters running round the northern quarter or Islington Mill producing some great music and been given two page spreads in the NME and a fast track to 6music radio play and the local bands who grew up in the city even up to the level of the stadium selling Courteeners being ignored or sneered at by most media channels.

This process started in the splintering of post punk with the Perry Boy culture that emerged in the wake of punks and mods and skins. Along with the scales in Liverpool this was a discernible youth culture with its own dress codes, music, lifestyle, drugs and all the other factors that dictate a style revolt.

This book gets right to the heart of the matter and traces the roots of the Perry Boys, ponders the eternal debate over whether Manchester or Liverpool was first city of the new style and examines the trainers, the trousers and nicking sprees in Europe. The thrill filled jaunts for football with grabbing jewellery and good times before the slammer came down and the real world got in the way.

It’s a fantastic energetic rush of a read, written from the heart and in the street language of the North Manc youth tribes. It’s funny, poignant and full of untold stories of the so called other side of the tracks where all this stuff really matters and is a first hand rampage through the streets and terraces and trains travelled for free looking for kicks and thrills. It’s the story of being dressed in so called casual wear as a new youth culture that eventually permeated the whole of society came together on the northern streets of Manchester and Liverpool – or as they say ‘four teams, three stripes, two towns and one lifestyle…’ in a rare olive brach stretched down the M62 to Liverpool- a tale of two cities that respect eachother far more than any banter lets on.

This book is the crucial missing link in the history of Manchester music and pop culture and gives you the whole balance and perspective and is stuffed full of anecdotes and facts and funny tales of the great music wars of the early eighties and puts the whole tale into perspective and reminds you of why clothes and music really matter.