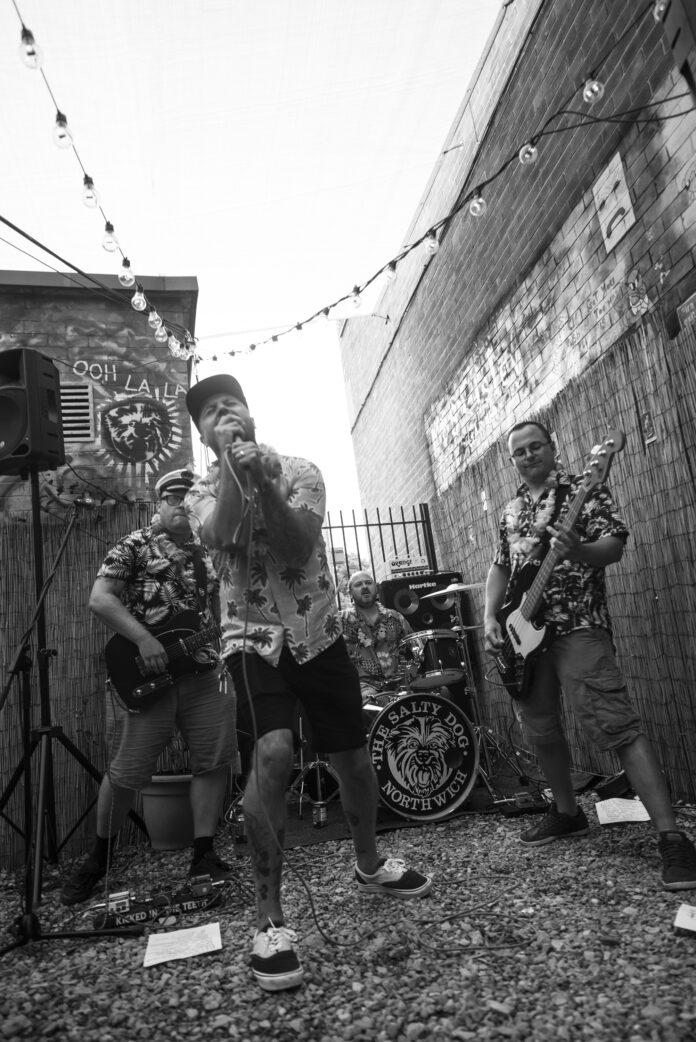 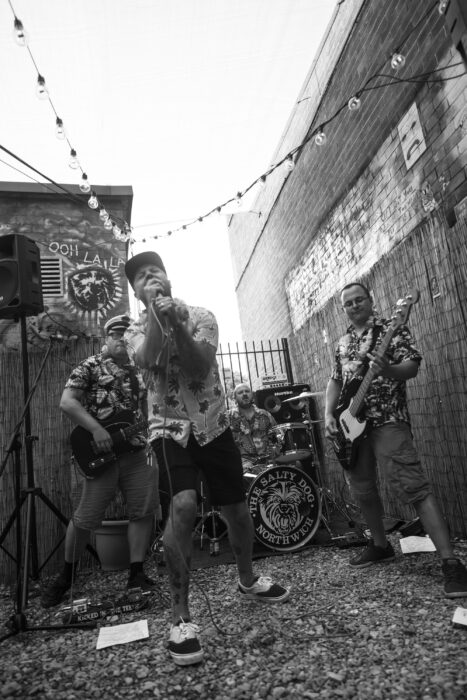 Kicked In The Teeth live review.

Kicked In The Teeth provide an afternoon of hardcore punk for 30-ish lucky punters at The Salty Dog, providing the first post lockdown gig since March in the newly decorated Tiki Garden. Wayne AF Carey ventures out and dusts down his gig attire…

How will this work? Will people be sensible? It’s a punk gig for fucks sake, probably the most sensible gig goers around, an older generation who have respect for other people and are passionate about their music. KITT provide us the soundtrack for the afternoon and it’s a party from the start.

When I arrive I score a pint from the bar which has been made into a one way system and works well. A few old gig friends have turned up which is a relief after the long wait since March. We are all given wrist bands and offered a garland which is all part of the Hawaiian theme of today, being the first gig held in The Tiki Garden at the side of the venue which is like a decorated ginnel (2 metres wide of course) and a unique setting which looks great.

The band themselves are all dressed in Hawaiian attire for the occasion, Mike on bass donning a captains hat. You’d think we were going to witness a Beach Boys tribute act! Fuck that! They kick off with a new number 1983 which piles straight in our faces, Jay’s rasping Lemmy like vocals complimented with Mundie’s pile driving drums all held together by the guitars and bass combo of Joe and Mike. They don’t let go and blast into the excellent Relieve Yourself and Patient State which speed along into a hardcore tsunami. They have a little breather and a bit of Covid banter before belting out the new single Death Adventure which sounds as good live as on record if not better.

The small but dedicated crowd are loving every minute and the only let down is the social distancing rules means the usual pogoing and moshing is limited, yet this is not the death of enjoying yourself, just a new way of showing it for now. They slow down a bit for their ‘mellow’ number Boys In The Back Room if you can call it mellow as it slows down to thirty miles an hour rather than the normal ninety. Don’t let it fool you though as they fall back into the pummeling tunes including One Way Street, another new number is revealed and an excellent Fill The Hole with that great guitar solo blasting out. It’s funny as fuck watching people walk by the back of the venue and stopping for a nosey, grinning in the back ground at the whole spectacle.

A short but sweet set that ends with a proper full on No Apologies, the first track off their must have album. A proper blast to end a great debut gig to celebrate the return of live music. Such a shame that Covid has fucked with this great scene. They could have easily doubled the audience for this one. A proper hardcore start to the gig season and a date that will be etched in my mind after a topsy turvy fucker of a year.