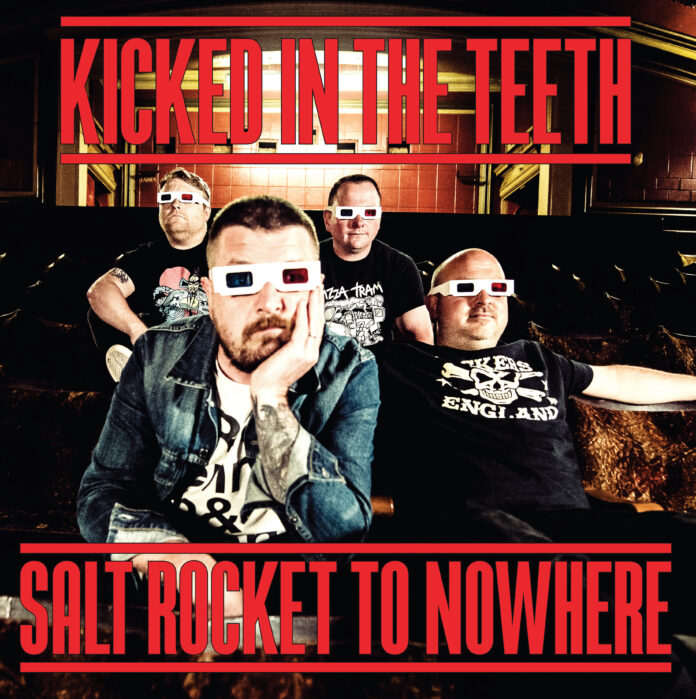 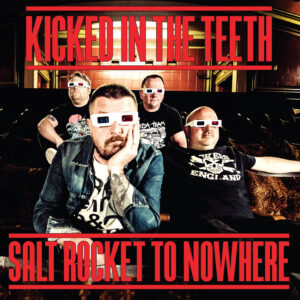 Second album from Northwich hardcore punk band.  ‘That’s a real kick in the teeth’ -means ‘a grave setback or betrayal’. But this, K-I-T-T is the sound of the fury of picking yourself up, getting angry, getting even and punching back – hardcore style.  Ged Babey gets pummelled by Kicked In The Teeth, metaphorically that is… unless they don’t like the review.

Fourth punk release I’ve reviewed this month. Die IV You – Misfits meets Fang style Horrorpunk with a Metal edge.  The Crash Landings -traditional punk’n’ Oi! singalongs with Motorhead wallop and Ruts skill.  Wine Moms – young pups playing pop-punk with Nirvana style angst and IDLES influenced fervour. Point is: no one ‘punk’ band sounds the same. Each are different from the last but all brand new.  And Kicked In The Teeth are the hardest, heaviest, meanest and most brutal of this batch.

Wayne reviewed their debut album from 2019 here, calling it steel-toe-capped punk for motorheadcases. The fact that drummer Chris spent some time in Oi! godfathers The Business is a bit misleading. Kicked In the Teeth are no common-or-garden Oi! veterans. There is a strong American Hardcore influence: a dozen bands from Black Flag to Cro-Mags influence their hard and dynamic sound.  They also keep up with current new UK hardcore heroes like Pizzatramp giving them a bit of competition.

Salt Rocket To Nowhere gives younger hardcore bands something to aspire to musically in terms of concise, match-fit, controlled rage and aggression with no flab or excess. The guitar-playing is phenomenal without being show-offy and too metal.  The rhythm section are like a machine (The Terminator rather than a dishwasher that is…)

It’s a strange album title. I asked the band about it.

Where does the title SALT ROCKET TO NOWHERE come from?

(Chris) As far as the title, we are one of those bands that struggles to come to any sort of consensus on things, so it’s a bit of an amalgamation of a few different ideas, it’s a slight play on Rocket To Russia, the salt reference is for Northwich where we are from, everything is salt related here, the Nowhere bit was just a bit of good old British self deprecation. At least that’s how I remember it, the other guys probably have a totally different recollection.

Loving the album needless to say – lot of energy and anger in it for old-fellas!

(Chris) I don’t think we intentionally set out to write a more aggressive album, but that’s just how it came out.

It’s important to us to be as good as we can be and hold our own with the growing number of great young bands, none of us want to be the band that’s just going through the motions. in that respect I’m really proud of this album.

Can you give me a bit of background on the songs MONACHOPSIS BONES and BORECORE – interesting song titles!

(Jay) Monochopsis bones is inspired by the life of a family member, and the pursuit of living a truly free existence outside of society’s reach whilst highlighting the good and the bad of living that way.

This section from the short, sweet and unpretentious press release sums up Kicked In The Teeth well:

The record follows the blueprint of the first with 10 songs clocking in under 30 minutes, so there’s no time to be getting bored. That said for all it’s punchiness it sees the bands song writing and lyrical content progressing quite a bit… it marries up the bands sense of urgency with their enduring ambition not to be shit.

Break My Neck has the rage and dynamics of UK Anarcho’s Conflict.  Borecore has the brevity and pace of Minor Threat but a bizarre bit of spiralling out of control guitar-noise. There must be a story behind the Dag Nasty go Oi! stormer called ‘1983‘. It really is a hit-after-hit album which doesn’t let-up for a second.

The last song,  threateningly entitled We Will Take You With Us is probably the single most ferocious 3 and a half minutes of UK Hardcore you’ll hear this year.  A couple of false endings and a stratospheric echoe-y three-note guitar figure –  the target of the lyrical aggression, ‘choose to face your fate / wipe your bloody nose’ is not made clear, but their demise is not gonna be pretty. Every crack on the snare seems to match every imagined punch in the face.

The violence is in the music and songs where it is exorcized. The members of Kicked In The Teeth are probably loveable teddy bears as individuals in real life.  The band is their release for all the pent-up anger, frustration at rage at government, institutions and society.  The video for Hometown Showdown is proof, as the band send-up what could be their ‘image’ as hard-men with hammy acting and a Batman & Robin style fight sequence.

Salt Rocket To Nowhere is a solid steel (as opposed to heavy metal) hardcore punk album that proves there is still a vibrancy and power in the genre. And still a need for it as a pressure-valve and that the best stuff doesn’t necessarily come from the USA.

Other Tour dates in May (supporting The Queers) and festival appearances at;
– Manchester Punk Festival
– Rebellion Festival (Sunday)