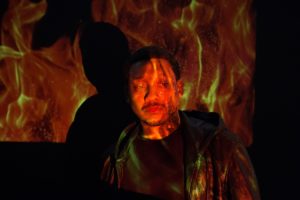 Kain is also a poet and writer. His dad Gylan Kain was the founder of “The Last Poets”, and he believes his own writing is innate. Kain is also a play-write and director. Most recently he is about to release his debut single, “Lil’ Duckie” from his highly anticipated album, “Lambs to Slaughter“, via True Groove Records on May 28′ 2019.

Khalil Kain is an Urban Icon who has a message. What he says is important, and it sounds important when you listen. He is providing America with his testimony and experience of race, equality and justice, imperative to the climate of our country. “Lambs to Slaughter” is actually the score to his theatrical play as he pens and delivers an urgent and explosive memorandum to the planet…

Louder Than War: What came first, acting it rapping?

Acting. But, I’m not a rapper. I’ve never been a rapper. I’m a writer! I appreciate music like the next man but I never learned to play an instrument. Not that I didn’t want to but I never got around to it. I worked in the clubs here in New York when I was younger. There was always music playing from the DJs that were working at night that I was friends with, so there was new stuff always coming up. I worked at the “Roxy.” I saw Madonna when she was first getting started get up on stage and perform live. It was her and two dancers. It was interesting because it was like an all black and Puerto Rican crowd mostly. They really dug her. But it was a different time. The music stuff that I do came out of a play that I wrote that is still in development. There are poems  in the play. So I contacted Thomás Doncker about doing the music for the play. He read it and liked the play, but as far as the poems went he said he would have to hear me recite the poems for him. He needed a better idea of what the vibe was so that he could compose some music for it. So I recited a few of the poems for him. Immediately he insisted that we go to the studio and record them. So we did, and as we were recording those I was just kind of inspired to write more. So I would come into the studio and show him something else, “like I wrote this last week”….and we just started recording stuff that I wrote. My father Gaylen Kain was one of “The Last Poets.”

When I was a kid about four I was hearing all of this pro-black, political poetry. It influenced me. I never felt pushed in any way or prodded to go that route, but I guess it was in me. But I have always written. I have always written stories I have always written poetry. Now I have that play and I have another play done, and I have three screenplays written. A film that I have just directed I did a complete rewrite on that, I’ve been writing a lot. I have been writing a lot more lately. So the music thing for me…. I just did regional theater. It’s like getting up in front of a live audience and performing a piece.

So what do we call it because it’s not spoken word either?

I heard it, I don’t know if it’s rap or not. It’s great whatever you chose to call it.

I think the fact that it does fall into some sort of hybrid category onto itself it’s making people kind of perk their ears. Like you. You don’t quite really know what it is. There are a lot of different elements and types of music, kind of like Americana. It is American music, it is Urban, it is social, it is political. But what I write definitely deals with the black experience in America. Without a doubt.

It also deals with Trump, and lots of other stuff. There are so many facets involved, that I really don’t know what to call it.

Yeah. If we put our heads together eventually something rings out. Something true will ring out. I don’t know what you can do with it because it wasn’t something that was conscious. It wasn’t like I looking to do this, be a musical artist or do this thing… I really was only going to the studio and recording stuff and Thomás said “well, you’ve got an album.” I said, “ok, what does that mean?” Then he has me performing with the band, The True Groove All-Stars. I think he was just curious as to what would happen, how it would go down, what it would be like. I’ve been performing for a long time on stage, on television, and in films. I wasn’t daunted in any way and it was cool, I had a blast. The band is great. I started playing guitar this year from hanging out with the band. In rehearsal, I was like “damn I’m the only one ain’t playing nothing.” I really became inspired to want to play. So now I’ve been playing guitar and it’s been great. It’s really good therapy also. I’m in it…I’m so in it.  I just got home, I’m talking to you, I’m going to play with my dog and get on my guitar in a little bit.

What do you want to come out of this?

I don’t want anything. That’s really how I kind of work. Want is not something that I deal with on a daily basis. Once in a while, something will come along and I’ll see it and I’ll want it.

So you just let the universe do its thing?

I really do. I looked at my girlfriend eight years ago and when I saw her I said: “I want that.” So generally I don’t really do that. Most of the time when I see something or feel something that I want, I get it. Having a career as a musical artist was not really on my radar. I’m excited about the music, I love performing with the band, I definitely anticipate writing more stuff and creating some music on my own now that I’m playing the guitar. There is another play that Tomás and I started working on, and my thing was that I was going to write play, and Tomás was going to write the music. And we got together and he said, “ok we’re going to write a song today.” I said, “no, you’re going to write the music.” He said, “no, we’re going to write a song.” And we wrote some songs. I’ve learned a lot in the last year, hanging out with the “True Groove All-Stars”, from a musical standpoint, which has been great. I love to learn. But as far as want, I’m not into want.

So you’re a real artist in other words?