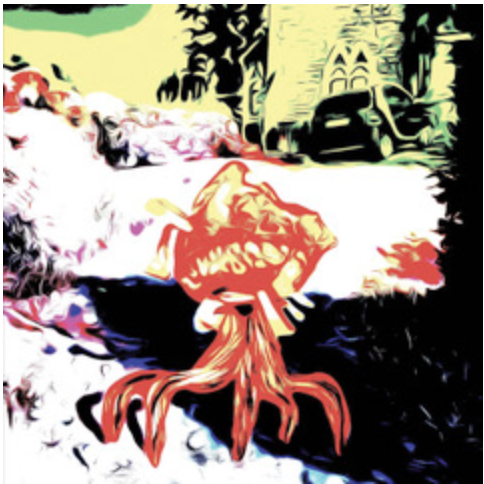 KEV HOPPER
“Sans Noodles”
The new album from former Stump bassist, and digital sampling innovator
Dimple Discs
March 18, 2022
listen to album here
Watch “The Dog Walker” video
Kev Hopper is probably best known as the bass guitarist with Stump, the much beloved Irish-English indie/experimental/rock group formed in London in 1983, who released a number of genre-bending albums and EPs in the late 80s. Since then he’s amassed an incredible body of solo works, his mainly instrumental output has been diverse and best described as a hybrid style of experimental and melodic pop with his distinctive fretless, “squelchy” bass playing often to the fore. His best know solo works are probably “Whispering Foils” (Duophonic/Drag City, 2000) and “Stolen Jewels” (Ghetto, 1990) and as a collaborator, he was a member of the audio/visual electronic quartet Ticklish (with Phil Durrant, Richard Sanderson and Rob Flint) and currently plays bass in the odd-prog-crypto-funk trio Prescott (with Rhodri Marsden and Frank Byng).
His debut for Dimple Discs ‘Sans Noodles’ is a musical delight, at turns playful and surreal, but always surprising and intriguing. Weaving together digital sound collages with live instrumentation, Kev creates a musical universe where guitar twang co-exists with processed voice rhythms and song narratives can take on a life of their own. The album features the two singles “Aroo R.A.” and “The Dog Walker”, a cover version of the The Shadows classic “Theme For Young Lovers”, and ends with a disarmingly beautiful and off-kilter piano balled “Fruit Flies” featuring the only traditional vocal performance on the record by Sharron Fortnam.
Also a very talented visual artist, whose paintings adorn the new album artwork, Kev’s work was used most notably for the High Llamas albums “Santa Barbara” and “Hawaii”.
On the new release Kev notes…”As it’s the 32nd anniversary of my first solo album ‘Stolen Jewels’ I thought it might be fun to revisit and update the methodology that I used on that album and apply it to this new 2022 release – namely the naive ‘pots and pans style’ (as I call it) sampling of the era which I’m still incredibly fond of. With new technology and greater computing power the art of sampling has changed a lot since 1989 but to this day I’m still excited by the early notion that you could pluck a sound from nature and pitch it on the keyboard to make tunes. This characteristic remains the original source of intrigue and wonder for me. On ‘Sans Noodles’ the odd sounds that result from this process are mixed in with twangy guitar, bass and a lot of faux vocal sequencing and ‘formanting’ (or vowel sounds) to provide a surreal and sometimes perverse, organic source for the melodies”.
— Kev Hopper on social media —
Facebook  Twitter  Bandcamp  Spotify  YouTube