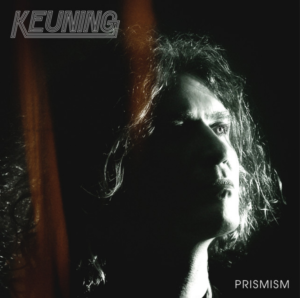 Up to this point Dave Keuning has been famously known as the lead guitarist and founding member of legendary rock band The Killers. Now, with his debut album Prismism, he puts his stamp on a new arc of his career and displays his song writing chops, proving they’re adventurous enough to fly solo.

Stylistically the album is a departure of sorts to the work Keuning played his part in with The Killers but, familiar sounds are still to be found within Prismism to fans of the aforementioned band. This is most apparent in the more keyboard-heavy tracks, such as Restless Legs, the lead single of the record. This track features one of the more infectious choruses on the album and it’s already clear to see that the song will be a massive moment at future live shows.

Huge, synth stacked choruses are one of the great strengths to the record and in spots that could have been held back due to keuning’s limited vocal ability, his powers as a songwriter shine through and come to the rescue on multiple tracks. The vocals are however, consistently good throughout the record but, as to be expected, they don’t match the variety of a vocalist such as Brandon Flowers.

Songs Pretty Faithful and Boat Accident are home runs for Keuning. The finest moments on the album come with the guitar-centric tunes, which is no surprise due to the star studded history Dave Keuning has with the instrument. Boat Accident is the album-opener and for sure one of the most enjoyable songs on the tracklisting. Lyrically, the track’s verses revolve around a relationship in bloom, before exploding into the highly memorable chorus section that you’ll struggle to get out of your head.

Prismism tackles a few different subject matters throughout it’s 14 songs. The main focuses of the lyricism are relationships and love, which play a big part in achieving the youthful sound of the album, along with the pop-infused instrumental delivery.

The title track sounds like a missed opportunity due to an annoying vocal effect during the song’s verses. Its lyrical ideas are there to be explored but, with little to no change of tempo throughout the entire song, it’s hard to keep the patience that’s needed to get through the lengthy output. It’s certainly one of the odder inclusions on the album and instead of coming off as experimental, it ends up sounding lacklustre.

Gimme Your Heart takes its minimalist production in it’s stride, proving itself to be one of the best songs on the album. It works so well within the positioning of the tracklisting it finds itself in; towards the end of the record. Its sound is the total opposite to anything else you’ll find on Prismism and it sits so nicely next to the more polished cuts on the album, as it displays the ex-Killers guitarist to be anything but a one trick pony on this record.

Prismism is a fine record and one that deserves your time. Most tracks will have you bopping your head as you indulge in the smooth keyboards and classic, American sounding guitar riffs that pop up all over the album. Catchy choruses aplenty, Keuning’s debut solo record is a solid success and one that has lead me to keep an excited eye out for his future work.