The opening date of the Keston Cobblers Club  Almost Home tour  (LTW album review here)  sees the RNCM continuing  a run of playing host to high profile folk acts – The Unthanks being due the following day and both Seth Lakeman and Eliza Carthy’s Wayward Band kicking up a storm toward  in their concert halls at the end of last year.

Quite a change of venue too for the Cobblers – much more used to a lively crowd crammed into the  intimate confines of the Band On The Wall and Deaf Institute, the expanse of the RNCM is a challenge when the band are used to lifting the roofs of venues and festival tents round the nation. The vastness of the space and a ceiling so  high that the their efforts may risk  evaporating into the spaces above their heads. A concession to the cosy nature  of the new album comes in a couple of standard lamps at the back of the set, slightly at odds with the promo banner. 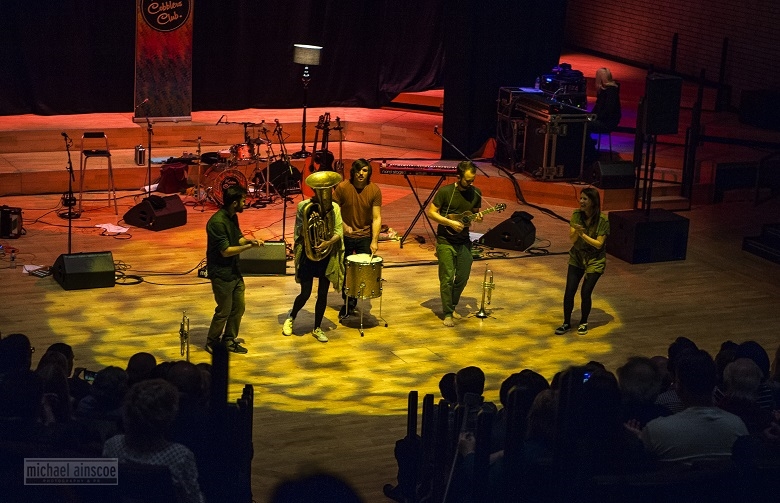 Their work gets cut out even more with a roomy dance floor space between the band and the seated audience, but  quickly spotting a “demure” crowd in tonight as opposed to the usual rowdiness of the Manchester set, it thankfully doesn’t take too long before their jaunty alt folk pop encourages a few brave souls to venture down. And then back again and then down again  in the first of several forays which  liven up proceedings and hopefully earn them one of the Cobblers’ famous dance off spot prizes. Once Demons from the new album gets the clap-along ice-breaking treatment, the show and the tour finally feel underway.

It feels a shame that the excellent early pairing  of  Bicycle and Won’t Look Back get slightly lost in the finding your feet opening few songs, but the reliability of Your Mother opens the floodgates for the dance squad. Slowly there’s a thawing as   instruments from the percussive  ukelele and bottom end oompah of the tuba start to make the presence known; instruments get  swapped and switched round and the collection of voices hits home on the Gallic  flavour of St Tropez.  They’re comfortable enough and there’s space enough to even venture out into the audience – well, not quite, but onto the dance floor area for an unplugged cover as is their tradition. The tribal drums and brass slowly revealing a slightly improvised but fun Money For Nothing

A quick mention to the tour support from Aussie Jack Carty, last seen in town supporting Blair Dunlop at the Band On The Wall. His easy manner and acoustic singer songwriter material saw him  treading familiar ground with the appearance of the harmonica and  songs of loss and heartbreak. Putting in the miles as they say, although his trip from Edinburgh to Manchester proving a mere trifle. Meanwhile the Cobblers cobble cheerily on, continuing to earn their stripes and ply their trade,   epitomizing the youthful attitude  of the bright young folk.

All words and live photography by Mike Ainscoe. You can find more of Mike’s writing  on Louder Than War at his author’s archive. He can be found on Facebook and his website is www.michaelainscoephotography.co.uk