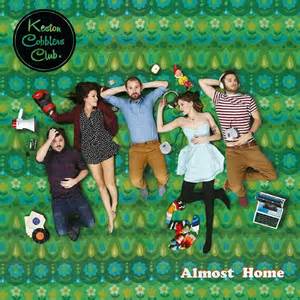 A more simplistic approach to their songwriting finds the five piece working round the theme of nostalgia and home yet maintaining the inimitable Cobblers’ style.

“Rambunctuous folk” was how 2015’s Wildfire album was described by The Guardian yet anyone expecting similar rambunctiousness might feel short changed. Almost Home brings to the table   a different side to the Cobblers; one where the less is more philosophy seems to have borne fruit.

For once,  the shiny happy people whose  dollops of harumping interjections of brass regularly punctuate their work and bring a warmness to their live incarnation, take a break. In their place comes a pervading melancholy quality; calm  yet not so far as maudlin, as the title track opens the album with a wave of optimism with what the band have called “everything we wanted to express with this record.”

Built round their regular m.o. of simple alternative indie folk, the slight shift sees Bicycles trundle along gently  and while this  song and in particular Demons have the potential to follow the joyous jubilation of Wildfire –   you can feel that they could take off any moment –  they  remain buoyant in a more subtle fashion without moving into the more obvious/expected direction.  They even go all  Graceland cum calypso  with a touch of funk on the folk-free  On Your Own which starts to broaden the palette  – a “little jump from the norm which are the backbones of our releases” – one also farmed on Hand That Feeds You whilst an electro techno influence makes a fleeting appearance on An Island.

On the one hand, they may have reined themselves in, there’s no doubt that with a couple of tracks, the boundaries have been pushed. Forest Hill might be the most significant in terms of ‘new direction’ – not quite the Spinal Tap Jazz Odyssey moment – but there’s a similar surprise when  the  atmospheric melody in  All I Need  visits Enya territory,    rounding  off a new experience with the Cobblers and provides  another unanticipated highlight.

The concentration on stories and melodies whilst holding back on the production and more weighty  arrangements casts the Cobblers in a new light where the carnival colours are less vibrant and take on a more sepia hue. More mature and measured, the bright young folk have shown that they have the aptitude to steer themselves in a more considered and ultimately more fulfilling quality.

You can watch the title track  from the album here:

On tour in April: